This collection of radio broadcast recordings, brought together as a kind of concert-on-CD, if you like, brings together several aspects of the work of Bernard Herrmann, a composer and conductor who still commands a committed following today, some 35 years after his death.

Having grown up in New York City, schooling first in Brooklyn, later at New York University and Jullliard, it seems only appropriate that this most American of musicians should introduce the British public to the Second Symphony of Charles Ives. Remarkably, it's a work which, somewhat like its composer, was rejected for half a century – Ives began work on it in 1897 and completed it in the first years of the new century, but had to wait until 1951 for its rapturously-received première under the baton of Leonard Bernstein. Five years later it was Herrmann, conducting the London Symphony Orchestra for a studio broadcast concert, who premièred the work in the UK.

The copy here was taken from an open-reel tape from what would appear to be a rebroadcast or disc transcription from the occasional clicks I had to deal with. The FM-quality broadcast sound quality is more than acceptable if prone to occasional peak distortion and a little tape flutter-dropout at the very beginning, the performance a credit both to orchestra and conductor.

Our second work is the Violin Concerto in A by Robert Russell Bennett, and presents another interesting connection. Bennett straddled the worlds of classical music and Broadway musicals in a similar manner to Herrmann and his film music; in both cases the 'other' work has remained longer in the memories of music lovers than what some might consider the composers' more “serious” output, but that should not distract from this most fascinating and delightful piece.

The soloist here the concerto's dedicatee and Bennett's friend, the violinist Louis Kaufmann. It's a very accessible piece (subtitled “in the popular style”) and would surely stand reviving, and includes an astonishing if very short virtuoso display in the third movement.

An alternative release of this piece on CD is currently available – but the sound quality on it is particularly grim and the piece about a semitone out of tune! This new transfer came from a mid-70s 'pirate' LP release which found its way into Edward Johnson's collection. I've endeavoured to remove the unfortunate fake stereo effect applied to the LP release – on which I also noted a bizarre and unpleasant change in equalisation for the finale which amplified mid-range frequencies to the great detriment of the listener; this, too, has been ameliorated. Overall sound is generally very good, perhaps a slight improvement on the Ives thanks to clearer top-end extension, though there is still a slight tendency to peak distortion in some sections, which I've tried to control as much as possible.

The finale of this Concert of American Music is an orchestral suite of Herrmann's own music. Entitled "Welles Raises Kane", its five movements are drawn from the film scores Herrmann wrote for Orson Welles' first two feature films, his early-1940s screen masterpieces Citizen Kane and The Magnificent Ambersons, both regarded by critics as among the two best American films ever made.

As with the Bennett, this is the only recording of this piece I've been able to trace (though I'm reliably informed it was recorded again by Hermann in 1967 and issued on CD in 1994), and as with the Bennett it has also been issued elsewhere, in poorer sound, and again badly pitched. The Bennett was relatively straightforward to check for pitching – we know from the title that the piece is in A, and there are a number of obvious A's at the beginning of the first movement which lend themselves to frequency analysis. The Herrmann was slightly harder to judge – again the alternative release I found was a good semitone out of tune by comparison to the present recording. Without a score, a modern reference or a named key it took a little more ingenuity to check pitching here – I obtained a copy of the film Citizen Kane, extracted from it the audio soundtrack, and scanned through this until I found the music which Herrmann used for his Overture. It was immediately clear to the ear that this was both in the same key as the present performance and in tune. I rest my case!

Sonically this 1949 radio broadcast is a little more constricted than the previous two recordings, though in still very clean and listenable AM broadcast sound. It was originally recorded onto 78rpm acetates, and I've endeavoured to iron out the clear differences in surface noise between the sides to allow a greater continuity of sound. As with the other recordings, I've retained all the broadcast announcements available to me. 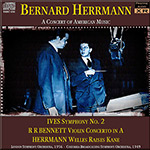