"One of the loveliest, beautifully calculated renditions of Beethoven’s Violin Concerto that I have ever experienced" - Fanfare

A good number of Pierre Monteux's concerts with the Boston Symphony Orchestra at Tanglewood in the summers of 1958, 1959 and 1961 were broadcast in early stereo FM broadcasts and preserved on tapes that have circulated privately over the years and, occasionally, seen the light of day on commercial releases. This first volume concentrates on 1958 performances of Beethoven and more modern music by French composers Debussy, Ravel, Milhaud and the German Paul Hindemith, together providing a contrasting repertoire of music, the highlight of which will be, for many, the fine performance of Beethoven's Violin Concerto of 9th August with American violinist Berl Senofsky.

The original tapes were rather hissy and closely recorded, resulting in a lack of perspective and space. They also suffered from peak distortion and, in places, intermittent treble dropout on one channel. I've done a lot to alleviate all of these problems, as well as seeking to improve the overall tonal balance of the recordings. The sound is now much cleaner and clearer, with a real sense of space, and if some peak distortion has been impossible to entirely eliminate in the very loudest sections, these are relatively few and far between and have been signficantly improved.

The stereo imagery is good for a live recording so early in the stereo era, assisted by digital phase correction technology. I elected to remove the rather lengthy introductions and links from the original radio broadcasts to allow for as much music as possible. 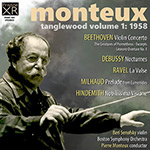 The real gems here are the Beethoven and Hindemith...

Pierre Monteux, one of the more versatile maestros of the 20th century, was never able to shake off his unjust typecasting as a specialist in French music and ballet music, especially that of the early part of his century. This pair of CDs, in a way, serves as a case in point, for the real gems here are the Beethoven and Hindemith performances. CD number one contains unnecessary recordings of Debussy’s Nocturnes and Ravel’s La valse, pieces that he made superior studio recordings of and, with outstanding and better-sounding recordings by Abbado, Ansermet, and Boulez available, one doesn’t have to go very far into the alphabet to do at least as well. On the other hand, the Beethoven performances strike me as outstanding as well as frustrating. In an explanatory note, the producer of this pair of CDs points out the difficulties, including peak distortion that he encountered when attempting to bring the original tapes up to standard. Unfortunately, he was unable to neutralize it enough in loud passages and, for this listener at least, peak distortion spoils Monteux’s supercharged Leonore No. 3, his well-judged Prometheus excerpts (Would anyone ever perform the Adagio if it were not the only example of Beethoven’s use of the harp?), and one of the loveliest, beautifully calculated renditions of Beethoven’s Violin Concerto that I have ever experienced … and I learned the piece decades ago on the Heifetz/Toscanini 78s. Beryl Senofsky’s playing is almost rhapsodic but definitely not episodic. He turns the Kreisler cadenzas into miniature dramas, so beautifully shaped are they. The whole performance is more like a dialectic, not a reading, and Monteux—not an easy accompanist to “lose”—is with him all the way. But those fortes—they turn fuzzy, and this doesn’t help Monteux’s appropriately stately, refined performance of Nobilissima Visione either. I can only hope that there’s a better source tape out there somewhere and that a better source exists for the 1959 and 1961 concerts. If I remember correctly, I attended a dynamic Monteux Brahms First during the summer of 1961, so I’ll keep my fingers crossed.