"Vivid performances in clear historic sound that captures the tragedy, up-beat excitement and sheer valour of the times in which they were performed"
- MusicWeb International 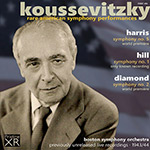 For such a diminutive outfit, Pristine are astonishingly productive in terms of quality and quantity. Add to this, that, to their credit they will not allow slight blemishes - even ones that cannot be 'healed' to prevent the issue of valuable and enjoyable rare material. They have also had the integrity to reissue their recordings where improved originals have surfaced after initial release.

Pristine's foray into the historical recorded legacy music of America from the first half of the twentieth century is expansive. It takes in the prodigious work of Howard Hanson as composer and as conductor (review review review review) as well as a blistering account of Hanson's opera Merry Mount (review), a selection of rarities from 78s including the Piston Second Symphony (review) and Piston's Third as conducted by Koussevitzky and recorded in 1948. Add to these two very special Harl Macdonald discs (review review review).

Now Andrew Rose - who is Pristine Audio - adds an impeccably fully-loaded CD of 1940s vintage recordings of live performances, all in his trademark XR re-mastering. These three previously unissued mono inscriptions of rare American symphonies are in historic sound originating in the AM radio signal of the 1940s. They blossom under Pristine's care. All that punctilious surgery on clicks, cracks, distortion and ambience must have been time-consuming. It was worth the effort.

Two of the symphonies (Harris and Diamond - products of war-time) are heard in their premieres so have documentary standing quite apart from their intrinsic musical values and pleasures. Koussevitzky was a boon to American composers of the first half of the twentieth century and this disc adduces three substantial pieces of evidence bearing out the assertion.

Koussevitzky had a belief in Harris the symphonist in which he was not alone among North America's great conductors and orchestras. His practical commitment to the cause can be traced back to his 1934 recording of Harris's First Symphony 1933: Pearl GEMM CD 9492 and before that on LP Columbia Masterworks ML5095 from the original 78s. Then, so far as record collector enthusiasts are concerned, there was the standard-bearer for Harris during his years of neglect: Koussevitzky's 1939 recording of the Third Symphony (Great Conductors of the 20th Century on EMI CZS 5 75118-2 originally released on RCA LCT-1153 circa 1955 from RCA 78s). The latter also included Koussevitzky and the Bostonians in Sibelius 5 and Pohjola's Daughter. This was my initiation into the world of Roy Harris via RCA Victrola VIC 1047 in their Sovereign LP series. I bought the Victrola LP secondhand as a student from a small record shop in Bristol not far from Gloucester Road. You can add to this roll-call the Harris Sixth Symphony which was issued by AS Disc on AS 563: Boston Symphony Hall, 15 April 1944.

The Harris has a vital energising kick and those eight horns belting out in unison only emphasise this. The first movement stands as one of Harris's most heroic and determined inspirations. Koussevitzky does nothing to mask the gallantry; rather he presses and pushes forward. The slow middle Chorale growls and rumbles with tragedy; there's a cough at one point but it is soon gone. The pressurised writing here reminded me several times of RVW 4. The final Fugue is not a typical rigid fugue, so worry not. Harris suffuses that movement with nervy electricity and pliantly dancing optimism. Some of this can be felt also in the Fourth Symphony's purely instrumental movements. Fast-stabbing attack characterises the movement as does the sound of massed violins in high tension neon cantabile. Yes, the sound crumbles at the periphery in the violin 'songs' but never so much that you cannot follow and revel in this very special music-making. This disc presents Harris 5 in its original version. Harris continued to make revisions to the work. There have been two modern recordings of the Fifth Symphony (Naxos and First Edition). This Pristine one occupies a position in relation to them rather similar to that of the 1938 Bruno Walter Mahler Ninth to the market-leader digital Mahler 9s; see also here. The same can be said of this Diamond Second Symphony.

I wonder if anyone out there has the William Steinberg/Pittsburgh Symphony LP of the Fifth. It's on Pittsburgh Festival of Contemporary Music PFCM-CB-165. I would very much like to hear it.

It's such a pity that, after the Sixth, Harris symphony premieres seemed to move away from Boston and Koussevitzky. Harris dedicated the Fifth to "the heroic and freedom-loving people of our great Ally, the Union of Soviet Socialist Republics". He reportedly suffered during the McCarthy era for his pro-Soviet stance; but then so did Copland. Even so, Ormandy in 1956 recorded the Seventh Symphony (Albany TROY 256) and it is nothing less than a glory of recorded sound. The Seventh stands as the pinnacle of Harris' achievement, even more so than the multiply-recorded Third.

There has been well-merited praise for the music of Edward Burlingame Hill not least for the Fourth Symphony (Bridge) and the Violin Concerto (West Hill). In fact the 'trigger' for me was Bernstein's venerable recording of Hill's orchestral Prelude - a lush impressionistic work seemingly influenced by Daphnis and by Spring Fire. The lushly passion-saturated three-movement First Symphony is fresh and has a Franckian propulsion. The finale has some swooning Baxian writing too; no wonder that the same forces had premiered Bax's Second Symphony only two years after this work was premiered there. The Hill is a winning work and its success lies in the Boston/Koussevitzky factor. I have been disparaging of Koussevitzky's much vaunted commercially recorded Sibelius but these live performances are quite another matter. There's the occasional dim and distant cough and applause at the end but little to detract.

The four-movement David Diamond Second Symphony surges forward with luxuriously Barber-like lungs - elongated singing lines and great emotional concentration. Its first movement is, after all, an Adagio funebre. The following Allegro vivo has the fierce tempestuous pulse of Ulysses Kay's contemporaneous overture New Horizons and at about 1:20 Diamond introduces a euphoria that tempers the preceding grittily embattled writing. The third movement is a serene eclogue. Its Andante espressivo is most moving, as indeed is much of this symphony. Once again those intense strings suffer from a degree of audio spalling but their import remains clear. The vibrant Allegro vigoroso promises victory in heroic language that has much in common with the Harris. Its life-enhancing pizzicato recalls similar pages in Harris's Fourth. This Diamond symphony has enjoyed a good modern recording originally on Delos DE3093 but adopted into the Naxos family. It has also had at least one broadcast outside the USA: Gerard Schwarz conducted the BBCPO in 1990 in Manchester.

The splendidly detailed and accessibly written original programme notes for all three works can be found at the Pristine website.

Thanks to Pristine for this triumphantly successful revival of three grand-hearted American symphonies. They are given vivid performances in clear historic sound that captures the tragedy, up-beat excitement and sheer valour of the times in which they were performed. I hope that Pristine will continue quarrying this vein with other American symphonies of the 1940s and 1950s.