“A performance that has great nervous energy, and that gives us all the strength ... that lies in the best parts of the music”
- The Gramophone, 1928

Sir Thomas Beecham’s 1927 recording of Handel’s Messiah has often suffered in comparison with his two later versions of the work. It is the least complete of the three (the 1947 set wins in that regard, if only by the inclusion of the “B” sections of two da capo arias not found in the 1959 stereo remake), and is in the most primitive sound. Additionally, the soloists and chorus were arguably bettered in the later versions. Nevertheless, it is valuable to hear, not only as a document of performance practice in transition from the huge choirs and slower tempi of the Victorian era, but also of the development of Beecham as a Handel interpreter. As contralto soloist Muriel Brunskill later recalled, “His tempi for this work, which now are taken for granted, were revolutionary; he entirely revitalized it, the old slow progress was gone forever. Messiah was reborn.”

For this first extended recording of the electrical era, Beecham used the then-standard Ebenezer Prout edition with its customary cuts and simplified orchestration based on Mozart’s arrangement. Most curiously, the final “Amen” was not recorded, which left the performance ending in the dominant. For those who find this like “waiting for the other shoe to drop”, I have included as an appendix the finale taken from Beecham’s 1947 remake, although I have not joined it to the earlier recording so as not to falsify it. Also missing from the original set but presented here was the “Pastoral Symphony.” Though recorded during the Messiah sessions, it was not included because it would have been an odd side. It was instead released on a single disc with another coupling. (One wonders why Columbia didn’t record the “Amen” and include it with the “Pastoral Symphony” to fill out the set without any odd sides. Perhaps it was thought that an 18 disc set was already enough of a challenge for collectors to afford.)

Although EMI brought out an LP of excerpts, the present recording has only had one complete extended-play reissue, a Pearl CD set from 1990 which left out the “Pastoral Symphony” because the producers were unaware that it existed. The problems inherent in the original recording might have something to do with the paucity of reissues. Although the warm acoustic of Central Hall, Westminster is well caught and the balances between soloists, chorus and orchestra are good, the original discs sound muffled and bass-heavy. In order to bring out detail, I had to boost the upper frequencies a good deal, which also brought along a heavier-than-usual amount of surface noise. In addition to this, each side had a good amount of pitch drift, which Andrew Rose has successfully managed with the aid of Capstan software. The frequent, almost random volume level fluctuations during some of the choruses, however, proved to be an intractable problem.

The sources for the transfers were exceptionally quiet American Columbia “Full-Range” and “microphone” label pressings, except for the “Pastoral Symphony” side, which came from a first-edition laminated English Columbia disc. 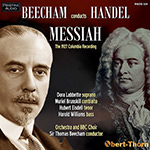 As an extraordinary glimpse into the performance history of one of the seminal works in Western music, it is a release of immense importance

Thomas Beecham made three important recordings of Handel’s Messiah. This was the first (and the first relatively complete electrical recording), made in 1927. In 1947 he made a more complete version, briefly issued on CD by Pearl, and then in 1959 he produced for RCA the spectacularly reorchestrated version (there is some question as to how much of that reorchestration is Beecham and how much is Goossens). In the Fanfare Archive you can find two really perceptive reviews of the other two Beecham releases by John Bauman (who shares with me a guilty love for the over-the-top 1959 recording, complete with cymbals, French horns, and Lord knows what else).

In all three, Beecham demonstrates a deep love for the score, and a passion and energy that is clearly aimed at removing any stuffiness that may have accumulated. Contemporary accounts of this 1927 recording indicate that Beecham’s tempos were quicker, his rhythms sharper, and the energy level higher than was the custom at the time. Mark Obert-Thorn has done his typically superb work in cleaning up the sound, and providing a richness of balance and color that one would not have expected from these originals.

The performance uses the then-standard Prout edition of the score, based on Mozart’s reorchestration of Handel’s original, and employs some traditional cuts. The later recordings are both more complete, 1947 being the most complete of the three.

It would be impossible to recommend this recording to anyone looking for a basic Messiah, or even a Beecham Messiah. I wouldn’t want to be without the large-scaled 1959 performance, and perhaps even the 1947 version as well. But for anyone interested in the history of performance style, this is an extremely important recording. Prior to this the work was performed by large Victorian choirs and weighed down with slow tempos and heavy rhythms. Singers involved with this recording, and observers at the time, commented strikingly on the conductor’s lightening of the texture, and the addition of energy and tautness to the score. The contralto soloist in this recording is quoted as having said: “His tempi for this work, which now are taken for granted, were revolutionary; he entirely revitalized it, the old slow progress was gone forever. Messiah was reborn.”

There are a few oddities about this recording. Although the “Pastoral Symphony” was originally recorded, it was not included in the 78-rpm set (perhaps because it made for an odd side). When Pearl reissued this performance (in much thinner sound) they did not include the “Pastoral Symphony,” probably because they were unaware that it had been recorded. Pristine has included it—and what a wonderfully phrased bit of beautiful playing it is (yes, with plenty of vibrato). More confounding is that the original recording did not include the final “Amen.” There is no known explanation, and one is shocked that Beecham permitted this, as the work concludes on the dominant! Pristine, after a tasteful pause, adds “Amen” from Beecham’s 1947 recording. It doesn’t quite fit in terms of performance style and sound world, but it is better than leaving that shoe undropped.

The soloists are better in both of Beecham’s later recordings, though alto Muriel Brunskill and tenor Hubert Eisdell acquit themselves well enough here. Again, this cannot be thought of as anyone’s basic Messiah recording. But as an extraordinary glimpse into the performance history of one of the seminal works in Western music, it is a release of immense importance, and produced by Pristine at the highest possible level.