BEETHOVEN Gratulations-Menuet
SCHUBERT Symphony No. 2 in B-Flat
DEBUSSY Prelude to the Afternoon of a Faun
BLOCH Schelomo
HAIEFF Symphony No. 2

This second volume is a follow-up to an earlier Pristine release (PASC 403), and similarly features Munch/Boston recordings which, with the exceptions noted below, have never seen an “official” CD reissue, not even in the 40-CD (plus one bonus CD) Japanese RCA series, “The Art of Charles Munch”.

The Beethoven minuet (Munch’s only recording of the work) was issued as the filler side to the composer’s Seventh Symphony when it was first released on 78- and 45-rpm discs. Like many such fillers, it was omitted from the LP edition, and disappeared from view after the early 1950s until it was resurrected on a Tahra CD set. It has been transferred here from an original “45”. Unlike the Beethoven, the Schubert symphony, recorded at the same session, was remade in stereo in 1960, at which time the present version went out of print. It is transferred here from a “Shaded Dog” pressing of its12-inch LP reissue (LM-9032), which was coupled with Koussevitzky’s Schubert Unfinished.

Although Munch’s 1956 recording of Debussy’s Faun remained available on budget reissue labels until the end of the LP era, his 1962 remake has been the one consistently chosen for reissue in the CD era. Part of the reason may be the earlier version’s gimmicky “ping-pong stereo” miking, placing the harpists on two different sides of the stage. (Listen to their first appearances early into the piece for a sort of call-and-response effect.) It finally saw CD publication in the Japanese RCA series; but for those like me who missed that volume, it has been transferred here from a tape source.

Munch’s recording of Bloch’s Schelomo has been the odd man out of his three stereo concerto collaborations with Piatigorsky on CD (there was an earlier, mono Don Quixote, as well), as its original coupling, the Walton concerto, has been chosen as the discmate for the Dvorak concerto on RCA and, more recently, Pristine (PASC 398). It did see an officially-sanctioned CD reissue on Testament; however, even though it was readily available in stereo during the LP era, the Testament disc inexplicably presents it in mono. It appears here from a stereo British RCA LP edition.

Finally, Russian-American composer Alexei Haieff’s Symphony No. 2, a transcription of an earlier piano sonata, comes from what is perhaps the rarest Munch/Boston disc. It was originally coupled with Easley Blackwood’s Symphony No. 1 as part of a project to guarantee recordings of works by contemporary composers which had been auditioned and recommended by a panel of judges, which in this case was comprised of Nadia Boulanger, Carlos Chavez and Alfred Frankenstein. While the Blackwood work saw an approved CD release on the Cedille label, the Haieff remained in limbo, leading to the original “Living Stereo” LP’s becoming a sought-after collector’s item. It is now restored to availability from its first and only “1S/1S” pressing. 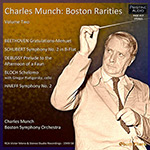 Munch made his début with the Boston Symphony Orchestra on 27 December 1946. He was its Music Director from 1949 to 1962. Munch was also Director of the Berkshire Music Festival and Berkshire Music Center (Tanglewood) from 1951 through 1962. He led relaxed rehearsals which orchestra members appreciated after the authoritarian Serge Koussevitzky. Munch also received honorary degrees from Boston College, Boston University, Brandeis University, Harvard University, and the New England Conservatory of Music.

He excelled in the modern French repertoire, especially Claude Debussy and Maurice Ravel, and was considered to be an authoritative performer of Hector Berlioz. However, Munch's programs also regularly featured works by composers such as Bach, Haydn, Mozart, Beethoven, Schubert, Schumann, Brahms, and Wagner. His thirteen-year tenure in Boston included 39 world premieres and 58 American first performances, and offered audiences 168 contemporary works. Fourteen of these premieres were works commissioned by the Boston Symphony and the Koussevitzky Music Foundation to celebrate the Orchestra's 75th Anniversary in 1956. (A 15th commission was never completed.)

Munch invited former Boston Symphony music director Pierre Monteux to guest conduct, record, and tour with the orchestra after an absence of more than 25 years. Under Munch, guest conductors became an integral part of the Boston Symphony's programming, both in Boston and at Tanglewood.

Munch led the Boston Symphony on its first transcontinental tour of the United States in 1953. He became the first conductor to take them on tour overseas: Europe in 1952 and 1956, and East Asia and Australia in 1960. During the 1956 tour, the Boston Symphony was the first American orchestra to perform in the Soviet Union.

The Boston Symphony under Munch made a series of recordings for RCA Victor from 1949 to 1953 in monaural sound and from 1954 to 1962 in both monaural and stereophonic versions.

Rarities, indeed … I have never heard three of the recordings on this CD and didn’t even know one of them existed. That would be Beethoven’s odd little minuet, which served as the final side on the 78- and 45-rpm issues of Munch’s early Beethoven Seventh. (I had only heard the LP, so this charming little trifle came as a pleasant surprise.) Munch may have been fond of the Schubert Symphony, for he recorded it twice, the second time in stereo. This is the earlier one, recorded in 1949, shortly after he took charge of the orchestra. Schubert seems to have been fond of the designation Allegro vivace, for it appears regularly in his scores and does so here, in the odd-numbered movements, and Munch’s performance is about as lively as one could ask—the playing is crisp and clear, but, for all his light touch and vigor, the performance demonstrates, at least to me, why Schubert’s symphonies, at least the first six, seem to work better with a smaller ensemble. The second movement, a charming theme and five variations, is so Haydnesque it could almost pass for the real thing. Each variation is in two parts, with each part repeated. Munch, whose aversion to repeats was inconsistent, does the first repeats but not the second ones; he also omits the repeats in the first and last movements. None of these cuts particularly bothers me, but I know there are those who “keep score.”

The Beethoven and Schubert pieces, recorded early in Munch’s tenure, are single-channel affairs—the rest of the selections are stereophonic. Perhaps RCA’s producer got carried away by this two-channel business when the Afternoon of the Faun was recorded, for the two harps were placed on opposite sides of the stage and the harp part bounces back and forth as the piece goes on. The producer, Mark Obert-Thorn, speculates that this is probably the reason why the recording was never issued on CD, with RCA consistently favoring his 1962 remake. It’s the kind of Faun I usually prefer, fairly fast, coming in at 9:05 and, for all the odd harp placement, nicely played and recorded, though I think I also prefer the later one.

I don’t think I’ve ever heard a recording of Bloch’s “Hebrew Rhapsody,” Schelomo, that I didn’t like, and for context I preceded my several hearings of the Piatigorsky/Munch with auditions of Feuermann/Stokowski, Neikrug/Stokowski, Nelsova/Ansermet, Ma/Zinman, Miquelle/Hanson, Thedéen/Markiz, and Rostropovich/Bernstein, the last of which became my reluctant favorite (“reluctant” because it’s the only one of those that I don’t own!), largely because of Lenny’s impassioned conducting. The Piatigorsky/Munch’s LP coupling was the first recording of the Walton Cello Concerto, but that was coupled with the Dvořák when it was issued on CD (by both RCA and Pristine), making this 1957 release a “Boston Rarity.” Somehow, in his long career, Piatigorsky never otherwise recorded Schelomo and I don’t know how often he performed it, but his command of the solo part and Munch’s fiery support make for an imposing, beautiful Schelomo if not a particularly “rhapsodic” one.

When I was in high school, I somehow became involved with an outfit called “The American Recording Society,” which issued what were, at that time, unusual recordings of music by American composers with a Viennese ensemble. They would send you an announcement of their latest release. The trouble was that, unless you notified them that you didn’t want it, they would mail it to you. Thanks to my laziness about rejecting the LPs, I became acquainted with music by composers who were merely names to me. Unfortunately, one of the LPs I managed to reject was one of Alexei Haieff’s Piano Concerto No. 1 (Leo Smit, piano) Robert Ward's Symphony No. 1. The conductors were Dean Dixon (the symphony) and Walter Hendl (the concerto). At least I could have heard something other than the Symphony No. 2 and might have a better grasp of what Haieff was up to, but all I have are two recordings of the piece, both by Munch, one live and the other this studio recording. Some have claimed that Haieff was influenced by Stravinsky’s Neoclassical period. That may well be, but (based on one piece!) his music strikes me as more robust and dissonant, with much of the tricky rhythms and unpredictable turns we may associate with Stravinsky. Although Haieff, who lived from 1914 to 1994, was pretty much ignored by the big record companies, he has something that few composers have had going for them: a label devoted to his music—Alexei Records. If this symphony arouses your curiosity, there is a way of satisfying it.