The original recordings used for this concert suffered from hiss, occasional peak distortion and, in places, radio static and interference. Whilst all three have been considerably reduced it has not been possible to completely eliminate some of the radio static. Although it is mildly apparent at times, it should not detract from your listening pleasure. Overall, thanks to the Pristine Audio XR remastering process, you'll find a full and rich sound to this excellent recording.

NB. In order to squeeze these recordings onto a single CD we have omitted announcements, quickly faded applause, and (as a last resort) sensitively shortened some of the pauses between movements. 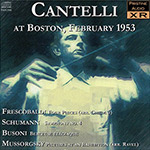 Guido Cantelli is one of those very few classical performers in the “tragically brief career” pantheon who became legendary names. The others, of course, are Joseph Schmidt, Dinu Lipatti, Ginette Neveu, William Kapell, Fritz Wunderlich, and Jacqueline du Pré, all of whom except du Pré had their careers cut short by death.

And yet of this group, Cantelli’s primacy is sometimes questioned. Was there really enough for a legend? Were it not for Arturo Toscanini’s imprimatur, would he really have been so highly regarded? The recorded evidence, even including the broadcasts, remains somewhat inconclusive. Cantelli, like Toscanini, believed in a unifying pace within which all tempo changes must somehow fit logically. At times, particularly his celebrated reading of the Schumann Fourth Symphony, he approached Toscanini’s intensity. Unlike his mentor, Cantelli never rescored works to highlight the inner voices, though he did use inflated versions of earlier music. Where Toscanini was prone to moments of undue haste or extreme clarity bordering on textural harshness, Cantelli was prone to the opposite, a luxuriant sound palette that sometimes bordered on the ultra-romantic. Yet certain Cantelli interpretations not only took critics by storm but have remained unique staples of the catalog. Among these are the Haydn 93rd Symphony, Hindemith’s Mathis der Maler, the Mussorgsky-Ravel Pictures at an Exhibition with NBC, and his luminous readings of the Schumann Fourth, Brahms First, and Schubert “Unfinished” with the Philharmonia Orchestra.

This particular release by Pristine Classical highlights the dichotomy. Here we have four highly diverse composers and performing styles within the same concert, and Cantelli’s success with some of the material is offset by a spectacular failure.

Sadly, that one glaringly poor performance is one I expected to be absolutely fabulous, Pictures at an Exhibition. Everything falls apart here. The brass instruments crack throughout. The orchestra sounds uncontrolled and flabby. The musical conception, so exceptionally fastidious and emotionally charged in the NBC studio recording, sounds slipshod and careless. The audience laughs at the “Ballet of the Chicks in their Shells.” Was it that funny? Or were they just desperate to find something good in the performance to enjoy?

Listening to the remainder of the concert, however, I get the impression that the BSO ran out of steam by the time they got to Pictures, for Cantelli literally galvanizes them into a performance of the Schumann equally as great as the studio recording made two months later, yet with the added luster of the Boston sound and the more spacious acoustics of Symphony Hall. Indeed, it is even more intense, each movement being played a shade faster than in the Philharmonia recording two months later. The Frescobaldi-Ghedini is one of those “Baroque Lite” interpretations for which Cantelli became a bit infamous (his New York Philharmonic recording of Vivaldi’s Four Seasons is equally overblown). The Busoni is—well, Busoni. Intellectual, dry, and for me, devoid of much musical interest; but if you like the piece, you’ll enjoy this broadcast performance.

If you don’t mind a romantic, “bad old days” reading of Frescobaldi, the first half of this concert will please you immensely. Andrew Rose’s remastering of this old broadcast tape, given to him in a shrill, hissy form, is stunning for its richness and vivid tonal quality. Very highly recommended for the Schumann.