The chamber music of Fauré was one of my first musical loves, and remains a source of great inspiration and pleasure. His first violin sonata, written in 1875-6 is an early work, but one which displays the full potential of the composer, both melodically and harmonically, whilst still showing signs of the Germanic classical tradition in the use of sonata form and the gradual transformation and development of thematic ideas in the first movement. The third movement, however, is a masterpiece of French wit and brilliance, and it is this movement that I've selected for our free download (below).

Heifetz was undoubtedly one of the greatest violinists ever. He appeared to have been born with an almost perfect technical ability, yet as this recording dislays over and over again he could also play with great feeling and emotion.

Perhaps due to his long career, some of Heifetz's earlier recordings from the 78rpm era have suffered a surprising degree of neglect. A major retrospective of his recordings, issued in the mid-1990's, was strongly criticised for the lack of attention paid to this earlier material. With this newly remastered issue of this lovely 1936 recording we hope in a small way to start to put this right.

From a technical point of view, restoring this recording left me being pulled in two directions at once. The piano is somewhat distant and restrained, whilst the violin is very much to the fore and had a tendency towards being shrieky. I also wanted to retain the rosin-flying aspect of some of the violin work, as well as the incredible delicacy heard elsewhere, without leaving a lot of surface noise and hiss, both of which were as high as one normally expects from mid-1930's British 78s. I hope I've succeeded in all of this - but invite you to judge for yourself. 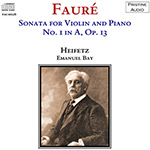 A masterpiece. Heifetz is, of course, dazzling

This is Faure's first substantial piece of chamber music and it is a masterpiece. Heifetz is, of course, dazzling (is he ever not?) and he negotiates the double-stops early in the first movement so they sound intensely Schumannesque and not just hard to play. The Andante is open-hearted and songful; the scherzo is almost too brilliant. The finale goes by in a glorious whirl, and suddenly it's over, and I'm left a little hungry. It's like a meal you've eaten while you watched an exciting episode on TV. Where did it go? And wasn't Faure supposed to be a French composer?

I decided to get a second opinion. I listened to Jacques Thibaud and Alfred Cortot from 1927. From the opening piano notes, we are in France, in a summer garden of light and shade. Then Thibaud comes in with a cramped, narrow tone and perhaps not always perfectly on pitch after the gleaming perfection of Jascha. If only Cortot and Heifetz had been paired.

I decide to try a modern performance and choose Joshua Bell and Jean-Yves Thibaudet. Beautiful violin and piano sound, very French atmosphere, but so much meditation, a bit of ponderousness here and there. This IS Opus 13, not 113.

I finally give in and go back to the Heifetz/Bay and am swept away by its brilliance and vigor, even if still pursuing the ideal Faure, Op. 13.

The sonic restoration is part of its mystique.