Sir Adrian Boult in his element with the London Philharmonic

As is made clearer in his biography (see below - abridged on our CD cover), Sir Adrian Boult was inextricably linked with the flowering of English music in the late-19th and early-20th centuries. As a conductor he had not only promoted numerous English compositions, but was personally acquainted with all of the composers represented in this magnificant collection - even the young George Butterworth, a composer tragically lost to us in the trenches of World War One.

All of these recordings were made by Decca during 1954, and include one of the label's very late (and by then, rare) 78rpm issues - Elgar's Chansons de Nuit & Matin - which was subsequently issues as a 45rpm single before finally making it onto a long player a year after its original release, on Decca LW5174.

What struck me, when remastering these recordings, was the quite striking difference in sound quality between the sessions. Despite each sharing not only the same orchestra, conductor and venue, but also the same producer (James Walker) and engineer (Kenneth Wilkinson), the tonal balances between the sessions were often quite different. I took the decision, therefore, to utilise the XR remastering system in a slightly different manner to my usual approach.

Having established, first of all, that the tonal balance acheived in the sessions of 1-2 November 1954 coincided most closely with what one might expect from an optimal modern recording, I set about equalising the recordings gleaned from the earlier sessions to more closely match those of the final session. The aim was to produce not only a continuity of excellent sound quality throughout the collection, but also to - I believe - more accurately represent the sound of the orchestra in those earlier recordings.

Despite his extensive recording career, it's also worth pointing out that this collection includes Boult's only recordings of both the Malcolm Arnold English Dances and William Walton's Siesta.

Transfers from the collection of Edward Johnson
XR remastering by Andrew Rose at Pristine Audio, September-October 2009
Cover artwork based on a photograph of Adrian Boult 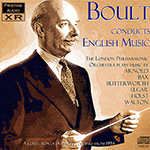 Shows a fine sense of urgency added to his other gifts of sensitive phrasing, structural mastery, and orchestral balance

These recordings aren’t taken from tape originals or metal stamps, but from items in a private collection. As such, they reveal the wear and distortion often associated with mildly worn copies of analog recordings, as well as the tubby, poorly defined bass and dry, x-ray treble that were features of some Decca 1950s releases. Add to that the fact that these selections were engineered in mono instead of the mellow stereo EMI and Lyrita provided for the conductor’s later re-recordings, and the question naturally arises: why bother with these efforts, at all?

There are a couple of good reasons, in my opinion. For one, not all of Decca’s mono studio efforts were sonically problematic. The bass is strong and well defined in The Perfect Fool here, with good lower strings, brass, and percussion. The upper strings and winds, too, possess a slight but attractive sheen that is a world away from the heavy reverb of many modern CDs, where it is employed as a remedy for personal defects of tone. The overall sound of this group of items is actually better than what I consider Decca’s average for the time, as period re-releases confirm and my own LP collection seconds—though the caveat remains regarding some distortion from worn copies.

More important, Boult’s recordings made during the 1950s continued to show a fine sense of urgency added to his other gifts of sensitive phrasing, structural mastery, and orchestral balance. Those made in the late 1960s and early 1970s have sometimes been faulted for lacking that same urgency, with comparisons between the conductor’s two cycles of Vaughan Williams’s symphonies held up as examples. Without wishing to indulge here in lengthy comparisons, consider The Banks of Green Willow, a work whose premiere Boult gave in 1914 (two years, be it noted, before Butterworth’s death fighting on the Somme). Certainly there’s much to be said for the recording made during the 1970s for Lyrita, with its warm and spacious ambiance; but the anxious trumpet-like motif heard repeatedly on the strings starting around two minutes into the work becomes a sharply faster and more pressing interruption in this 1954 version, launching in turn a more impassioned climax half a minute later. This makes for a more effective contrast with the final section, given its Lark Ascending mood.

I don’t wish to denigrate that later release, once again available on Lyrita 245. Its sound is excellent, despite the analog originals, for one thing. For another, it supplies fine performances led by Boult in several short works of Herbert Howells, including the best performance available of the beautiful Elegy for viola, string quartet, and string orchestra. But Pristine Classical’s examples of a “youthful” Boult, still in his sixties, furnish a corrective to the image provided solely by his late EMI albums. Recommended. You can purchase the CD or download it from www.pristineclassical.com.