These recordings were sourced from generally very high quality tape recordings. Despite some electrical hum and the occasional buzzing, both of which have largely been dealt with, only the very occasional incidence of mild, and short-lived dropout in any way troubled the reproduction. XR remastering has greatly improved the listening experience, with a fuller, clearer and cleaner sound. I have edited out some of the longer sections of Jim Fassett's original CBS radio commentary, most of which was largely irrelevant to the concerts.

Cover artwork based on a photograph of Guido Cantelli 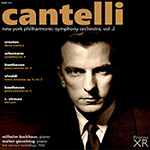 When [Cantelli] returned to New York in March his first concerts included appearances with Wilhelm Backhaus. In all probability he was already feeling the stress of being held to his contract when he arrived in New York and this was exacerbated when he sensed that the members of the orchestra were being somewhat lackadaisical when accompanying Wilhelm Backhaus during the rehearsal of Beethoven’s Piano Concerto No.4.

Jerome Toobin, who had become the manager of the self-governing Symphony of the Air (the successor to the NBC Symphony Orchestra) and who entertained hopes that Cantelli would become its principal conductor if sufficient finance could be raised had been invited to have lunch with the conductor in his small suite in Essex House and told to stay until Cantelli returned from the rehearsal. As recounted in his book he was looking at Cantelli’s score of Cosi fan tutte when the conductor came in looking desperate.

He ripped off his topcoat, threw it across the room and shouted ‘What ‘oomiliation, such — such — such ‘oomiliation. It is too much. I cannot stand this. I tell you, I can’t stand this.’ And he sat down and buried his head in his hands. I said something about taking it easy or relaxing or something, but he was past simple ministrations.

‘These men. They do not like me — good. I am not to like, you know. Nobawdy (Toscanini also said nobawdy and everybawdy) likes me. I am not to like. But to sit before a great artist like Backhaus and scratch at the strings, no vibrato, no feeling just like this.’ And he raised an imaginary violin and imitated the first measures of the fourth Beethoven concerto — right after the piano’s unaccompanied opening — conveying uninterested, bland, dead, dull playing. ‘No, it is too much. And Backhaus knew. He knew. Everyone knew. It was terrible. Terrible. I cannot do this. It is too much’ And there — right there — Cantelli resolved to call Bruno Zirato.

According to Toobin Cantelli called Zirato, the manager of the orchestra, asking again to be released from his contractual obligations for the concerts in the coming winter and quoting not only his forthcoming work with the Orchestra della Scala but also the fact that his wife was expecting their first child. However, the major reason was his complete lack of rapport with the orchestra’s personnel. The telephone call started calmly, then excitedly and finally angrily in Italian which Toobin had little problem in following even though his Italian was somewhat limited. His request had been rejected for the second time.

He put the phone down and looked at me, tears bright in his eyes. ‘He says no. He says I am too sensteeve. He says I am not strong. He says — he says no, and he will not listen to me.’

Whatever traumas had been experienced by the highly sensitive Cantelli during rehearsal appear to have evaporated by the time the broadcast performance took place and all three works have been preserved. Furthermore, in the April issue of Musical America the critic (RS) had this to say about the performance of the concerto:

His conception of Beethoven’s Fourth Piano Concerto was one of simple grandeur, tempered by lyrical eloquence and delicacy. Rhythmically and in every other way it was superbly shaped and executed, and he played the work as if he had composed it himself, with absolute dedication. Cantelli and the orchestra provided a solid and emotionally vital accompaniment.