"To have them gathered together on a single disc, conducted by the man and played by the orchestra who were in every way present at the creation, is the gift of a lifetime" - Fanfare 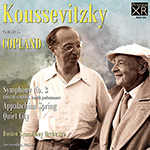 These performances are eloquent, compelling, and remind us of the peerless instrument Koussevitzky maintained during his quarter century at its helm

Reviewing this superb release on my 79th birthday, Andrew Rose and Pristine Classics have given me a present I have desired for over 60 years. It was probably 1955 when I first heard Copland’s Third Symphony; the premiere recording, a Mercury LP, with Antal Doráti conducting what was then called the Minneapolis Symphony, of which he was music director for over a decade. I knew, of course, that “Koussy” and the BSO had given the first performances, but over the next couple of decades, even as I heard broadcasts from the BSO Transcription Trust, this work never surfaced. I assumed it never would.

In the 1980s, long past my years as a stage door “Johnnie” I had a few opportunities to meet and converse with Doráti (a dour man on his best day!), and asked him why he had never recorded this work again, (since he continued to perform it now and then, and very well). Dismissively, he said it would never sell since there were already recordings by the composer and Bernstein. Well, I may be dumb, but I am not stupid; I knew when to hold my tongue!

It is not that I am particularly a devotee of Copland, nor do I consider the Third to be the Great American Symphony. Ives’s Third (all four by Ives, for that matter), the Harris Third, and Creston’s Third as well (also his Second), strike me as better constructed works, and works of as much or more musical substance. David Diamond and Roger Sessions also have their claims. But I love this piece, and although I don’t listen to lot of Copland’s music, I also love Quiet City, and the composer’s most famous ballet as well. To have them gathered together on a single disc, conducted by the man and played by the orchestra who were in every way present at the creation, is the gift of a lifetime.

How do they sound? Well, Andrew Rose is candid in his notes as to the difficulties in getting a usable master out of the source material for the symphony. The performance was a matinee concert in Carnegie Hall, November 16, 1946, about four weeks after the Boston premiere. This seems to have been the orchestra’s fourth performance of the piece. I have listened to this CD on a variety of playback systems and, despite Rose’s apologies, I don’t find too many spots in the symphony that are really deficient; only one really noticeable dropout. I have a high tolerance for historic recordings, and, in turn, the level of quality for which Pristine strives is high. The performance of Quiet City is from a Symphony Hall broadcast (March 10, 1945), and the ballet is a performance at Hunter College outside of New York City (April 13, 1946). The sonics of both are entirely adequate to my ear.

These performances are eloquent, compelling, and remind us of the peerless instrument Koussevitzky maintained during his quarter century at its helm. I was shocked to read, in one of Pristine’s Internet postings, a criticism by a commentator negative to the great first trumpet of the era, Georges Mager, who died a couple of years after these performances, and was succeeded by his protégé Roger Voisin (who, in turn, gave up first chair after a critic roasted him when Leinsdorf and the orchestra performed Mahler’s Fifth). Both typified the French school. A pair of notes almost (not quite) gets away from Mager early on in the symphony, but otherwise his playing, in the famous fanfare, and also his playing with the legendary Louis Speyer (English horn) in Quiet City typifies the unique character of the first chair players, in the BSO, as also in the old NY Phil, Philadelphia, Chicago, and the NBC Symphonies. Trumpet players such as those in Boston, Herseth in Chicago, Vacchiano in New York, Adelstein in Minneapolis, who succeeded Louis Davidson in Cleveland—it is players such as these and their colleagues on other instruments that gave those orchestras their individual character. To hear Copland’s solos played by Adelstein, Vacchiano, Mager, or as I did at my first live performance of the symphony in 1973, by Armando Ghitalla, with the young Michael Tilson Thomas conducting the BSO, was to hear not merely the eloquence of Copland’s music, but also to experience the constant development and change of the art of performance.

This is an important release, important musically and historically. It is one to be listened to carefully and with ears attuned on the one side, surely, to the technical limits which particularly mark a few spots in the symphony, but also with ears and mind sensitive, just as surely, to a quality of orchestral execution, a personal approach to music making, which just may be gone forever. This was a great birthday present! I now have only four positions remaining on the 2016 Want List.

For approximately 15 years , from, say, 1935 to 1950, Aaron Copland composed nearly all his most popular works, starting with his score for El Salón México and ending with a batch of film scores or, if you like, the “Old American Songs.” One might call it his acknowledgement of “Socialist Realism.” He dealt with mostly American subjects, particularly that of the West and even invented a musical language to evoke it, using “open” harmonies, often supporting folk tunes or his version of them. If you find yourself thinking of the “wide-open spaces” when you hear music of this kind, you have been indoctrinated by a generation of Hollywood composers who paid Copland the sincerest form of flattery. I must emphasize that these popular pieces were but a small fraction of his output then—he had not lost his edge even if he was no longer the composer who could “commit murder” (Walter Damrosch). An enthusiastic advocate of his and other American composers was Serge Koussevitzky, the conductor of the Boston Symphony Orchestra who used his influential position to put their music before the public. Among the pieces he actually commissioned was Copland’s Third Symphony, which the enthusiastic conductor said was the “greatest” symphony composed by an American. The 1946 premiere took place in Boston. Pristine presents a recording of the fourth performance, which was billed as the first in New York City (though the third performance had taken place in Brooklyn!). It is not necessary to share Koussevitzky’s enthusiasm in order to enjoy the piece, which ends with an elaboration of Copland’s 1942 Fanfare for the Common Man. Despite the less-than-brilliant sonics, Koussevitzky’s conviction, even passion, comes across. Indeed, I’d say that it’s the one outstanding performance on this CD and, in my comparative listening, even held its own with such perfectly good “modern” recordings as those of Bernstein 1, Slatkin, and Copland himself.

The brief tone poem Quiet City was cannibalized from incidental music Copland wrote for a 1939 play of that name by Irwin Shaw, which lasted for three performances before vanishing into oblivion along with Copland’s score, originally written for trumpet, alto saxophone, B♭ clarinet (doubling bass clarinet), and piano. The original score was discovered a few years ago and it is my understanding that it has been recorded. As for the tone poem, composed for trumpet, English horn, and strings, it’s quite a lovely, atmospheric thing that can probably be performed effectively even by a talented amateur orchestra. Copland may have had this in mind when he wrote a parallel oboe part into the score, just in case there was no English horn available. In the play, the solo trumpet represented the call of the hero’s conscience. Koussevitzky’s performance is certainly important because of his advocacy of Copland but it’s not superior to any number of better-recorded ones.

The same caveat applies to Koussevitzky’s performance of the suite from Appalachian Spring, which consists of all but about eight minutes of the complete score, originally written for a Martha Graham ballet. The original score called for a small chamber orchestra and has been recorded in both this form and with an expanded orchestra, but most recordings are of the suite, which is often billed as merely “Appalachian Spring.” In fact, the orchestral score I consulted is merely titled “Appalachian Spring—Ballet for Martha,” despite the fact that it is of the 20-minute-or-so suite. What this suggests to me is that Copland did not especially want the complete score performed out of context. While I’m on the subject, I might as well point out that there is no musical difference be­tween Rodeo and Four Dance Episodes from Rodeo; the complete ballet consists of six episodes, two of which are unaccompanied by music. In one, a group of dancers claps in rhythm to stay together; in the other, the Head Wrangler does a virtuoso solo dance. Koussevitzky’s live performance of Appalachian Spring is a near-duplicate of his studio recording of the previous year; it just doesn’t sound nearly as good, not to mention that Copland created an almost conductor-proof score and I cannot say I have ever heard anything that could be described as a “bad” performance. (Anybody remember the old Walter Hendl/ARS recording? That’s the one I learned the piece on.)

I respect the importance of this release, but I believe it will be of primary interest to those with an intense interest in the composer or the conductor. The latter’s grave, incidentally, is located about two miles away from where these words are being typed.