I've attempted on a number of occasions to work on the solo piano recordings Alfred Cortot left us in the earlier years of electrical recordings, but on previous occasions found my source material lacking, or my technical resources not up to the job. There is little point reworking this repertoire unless and until one can bring something really special to it.

That is what this volume, which I hope will be the first of many, has I hope achieved. For the first time the vagaries of 1930s pitch stability have been treatable, bringing an iron-like stability and solidity to Cortot's piano. This, coupled with the re-equalisation of 32-bit XR remastering, brings Cortot's instrument back to life as never before. I've also used the sympathetic resonances of the small recital hall at Santa Cecilia in Rome to further bring a sense of "being there" to the sound of these unsurpassed performances, and for this reason would recommend listeners to the Ambient Stereo editions of this release - they retain the mono integrity of the original recording whilst offering breathing space around the intrument.

As with our remastering of Schnabel's Beethoven sonatas, the combination of these approaches will surely allow those already familiar with these recordings to hear them almost afresh, to re-evaluate Cortot's artistry again, and greatly enhance the pleasure of listening to one of the greatest of pianists at his very finest. 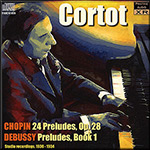 Cortot’s Debussy Preludes are mesmeric in all respects

This is a tremendous issue. Andrew Rose of Pristine Classical has managed to smooth out any pitch problems for this 1933/34 set of Préludes. He has allowed us access to a sense of space around Cortot by using the sympathetic resonances of the small recital hall in Santa Cecilia, Rome to add depth, something that can be enhanced using the Ambient Stereo version of this release.

The Chopin Preludes on offer here, recorded in Abbey Road Studio No. 3 on July 5, 1933, and April 20, 1934, and originally issued on HMV DBs, offer astonishing insight into Cortot’s way with the magnificent edifice of op. 28. Interesting to compare this performance with the earlier March 1926 performance recorded at Hayes, Middlesex (using, in the present instance, Mark Obert-Thorn’s Naxos transfer, 8.111023). There, there is a fragility of sound running through that, in comparison, which sounds almost vulnerable. The performance remains astonishing, but somehow just fails to reach the heights of the later, perhaps merely because it is easier to get swept away by the sound of the Pristine release. There can be no denying that the added depth of the 1933/34 recording in Rose’s hands opens grand vistas. The E Minor (No. 4) becomes a Lisztian tone poem in piano transcription such is its emotional impact, while the larger range of dynamic and the clarity enables one to admire the faux-innocence in No. 7 (the famous A-Major Andantino) that made Cortot’s Kinderszenen readings so special. The carefully plotted waves of sound of No. 8 (F♯-Minor, Molto agitato) become all the more marvelous; the so-called “Raindrop” is, once more, a tone poem in all but name, its dynamic range and interpretational vista all the more honored in the Pristine pressing. Cortot’s legerdemain becomes even more jaw-dropping. The C Minor’s opening paragraph (No. 20) is positively granitic here in Abbey Road, while its edges are softened somewhat in Hayes; No. 23 (F Major) is magical, even more than the earlier performance, while the final D Minor is a Flying Dutchman-like storm of more immediacy than in the 1926 traversal, and thus achieves more of a sense of culminatory, hard-won triumph. Both versions honor in no uncertain terms the grand operatic drama of No. 18 (F Minor).

Unfortunately I don’t have access to the EMI Références issue of the 1933/34 account. It may well be difficult to source, anyway, and the Pristine is available as a download pretty much anywhere, and easily.

Cortot’s Debussy Preludes are mesmeric in all respects. There is a superhuman care injected into the chordal work of “Danseuses de Dephes”; the sheer evenness of the oscillations of “Le vent dans le plaine” is miraculous in itself, and the sonics allow us to enjoy the variations in tone Cortot brings to “Les sons et les parfumes tournent dans l’air du soir.” Amazingly, the sonics cope with the high frequency demands of “Les collines d’Anacapri” (and, just, with “Ce qu’a vu le vent de l’ouest”) and support the astonishing fragility of “Des pas sur la neige.” Perhaps the quality of the transfer comes across most fully in the sunken cathedral, a celebration of remembered bell resonances and recontextualized plainchant; yet being able to savor the quixotic temperament of the final “Minstrels” is another aspect of this.