Chopin's 24 Preludes stand alongside Bach's Well Tempered Clavier as one of the greatest sets of miniature masterpieces ever written for the solo keyboard. Like Bach, Chopin explores each of the 24 major and minor keys, though he omitted to compose works to follow these tiny works, "masterpieces of controlled emotion, harmonic daring and figurative invention", as The Record Guide put it in 1956.

That august volume was ever so slightly sniffy about this recording, largely due to the sound quality of the original release, which left plenty to be desired - "the surface is heavy, the sound is dead and lacking in high frequencies". Well perhaps it was another off-day in the Decca recording studios in 1953...

Fortunately Peter Harrison at disk2disc views remarks like these as a challenge - especially having heard the stunning rendition of these works by Gulda.  Though originally sounding much as stated above, yet again he has performed minor miracles in his restoration studio deep in the English New Forest, and the result you can now hear sounds better than it ever has done, probably even in that Decca studio control booth, over 50 years ago. In fact, it sounds as close to the original piano as it is possible to get - a superb job on an excellent recording.

Friedrich Gulda (1930-2000) was blessed with both superb technique and a strong will to do his own thing, a rebel against the strictures of the traditional classical music world who deliberately shocked audiences by inserting his own jazz compositions into recitals, refused to conform to the normal dress codes of classical pianists, and revel in literally driving away sections of his audience from the auditorium before launching into genius interpretations of the great classical repertoire. Here he shows both poetry and superb weight of tone as required, in a truly masterful performance. 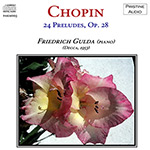