Long-forgotten song recitals from one of the greatest sopranos ever

Flagstad’s postwar American recordings for RCA Victor, made between 1950 and 1952, form one of the least-known portions of her discography, not least because of their lack of availability for most of the past half century. Except for a 1965 LP reissue of Haugtussa and a subsequent inclusion of one of its tracks on a 1993 CD devoted to historic recordings of Grieg songs, the recordings featured here have not been available in any form since the 1950s.

The reason has less to do with the quality of the singing – after all, it was only two months after the last session on this program that Flagstad recorded her iconic Isolde under Furtwängler – but rather with RCA’s lack of interest in reissuing anything other than her Wagner recordings. (Her prewar RCA song recordings have similarly been ignored, although at least those have been reissued on CD by independent labels.) Except for the Haugtussa cycle, which Flagstad recorded on two other occasions (Victor, 1940; Decca, 1957), most of the items taped in these sessions were the soprano’s only recordings of the works, which makes their reissue doubly valuable.

This release is the first of two which will reintroduce these recordings to modern audiences. The second volume will feature more Schubert and Brahms, along with Richard Strauss and a group of songs in English by contemporary composers. Comparative listeners will note that this Haugtussa, recorded in the same Hollywood studio ten years after her initial version, runs about a minute and a half longer than the 1940 recording, while her familiar Charles encore is paced much more swiftly than its 1936 predecessor.

While the Haugtussa was transferred from the “white dog” label reissue with the benefit of somewhat quieter surfaces, the two other recital discs apparently only came out on their first-release pressings – “plain dog” labels for LM-1738 and maroon “shaded dog” for LM-1870 – which tend to be less quiet than later LP pressings, and some surface swish remains on a few tracks.  Although I was able to assemble six copies of LM-1738, the actual transfer of Frauenliebe came from a single original HMV edition of the disc (ALP-1191).


Special thanks to Maynard F. Bertolet and Howard Sanner for providing source material 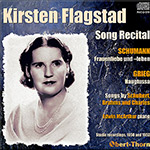 The art of Kirsten Flagstad (1895-1962) receives excellent service by way of Pristine and master restoration engineer Mark Obert-Thorn, who revive inscriptions the great Norwegian soprano made for RCA, 1950-1952. The original vinyl LPs from which many of the songs derive have passed into obscurity, since RCA seems to have lost interest in Flagstad’s post-war efforts...

The Schubert (17 March 1952) and Brahms (10 April 1952) provide just the kinds of vocal elegance and virtuosity in which Flagstad exhibits as much restraint as she does vocal prowess. Schubert’s “Die junge Nonne” offers another of his ‘dark and stormy nights’ narratives that could bathe in ‘religious’ treacle, if permitted. Of the Brahms group, “Meine liebe ist gruen,” Op. 63, No. 5 bursts forth with a vehemence not easily matched, either by the composer or fellow vocalists. The “Sind es Schmerzen, sind des Freudes,” Op. 33, No. 3 offers wonderful accompaniment from McArthur, the song taken from the Tieck cycle of courtly love and loss, Die Schoene Magelone. The tissue of medieval ardor that Flagstad and McArthur weave suggest that this opus stood as his personal version of Tristan.