Of the four composers represented in this remarkable collection, only Rossini (1792-1868) can be considered well known, and for this we have his operas to thank. Of the rest, we find a handful of renditions of the Marcello (1684-1750) in the catalogue, one of the Cambini (1746-1825), and nothing tha resembles the Bonporti (1672-1749). However, in its arrangement by the composer Alfredo Casella for small chamber orchestra, in this case the fourteen members of Virtuosi di Roma, we have a particularly rare rendition of Rossini's Sonata, rendered in at times quite piercing near-Baroque style.

Rare though the music may be, and obscure some of these composers, there is music of real beauty to be found in this collection. It was the recordings of Trio Santoliquido which drew me first to Virtuosi di Roma - all three members of that Trio also appear on this recording. The ensemble was the vision of composer, pianist, musicologist and conductor, Renato Fasano, who assembled what he regarded as the finest Italian instrumentalists of the day, and "fired them with what was then still a dream", according to the LP's sleevenotes. "After a long period of discussion, rehearsal, and endless sifting of musical masterworks, the group finally made its debut, and the dream was realised even beyond Maestro Fasano's expectations."

Sleevenote hyperbole, maybe, but these recordings were certainly very well received - of the four represented in the 1955 edition of The Record Guide, three LPs (including this) receive the ultimate double-star accolade, with the fourth receiving a single star. Referring to the latter LP, of 18th century music for strings, the guide comments: "The Virtuosi di Roma specialise in this sort of thing, and do it very well." Perhaps with their star system they didn't feel the need to state that on this disc they did it even better...

ROSSINI Sonata for 2 Violins, Cello and Double Bass No. 3 in C 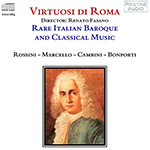