Rachmaninov plays his 2nd Concert with Stokowski in truly astonishing sound quality for an acoustic recording!

"What is truly remarkable, however, is the piano sound, which is full, rich, solid, and completely stable in pitch" - Fanfare

This is the third of four volumes which aims to present all of the surviving acoustic recordings made by Leopold Stokowski with the Philadelphia Orchestra at the studios of the Victor recording company between 1917 and 1924. The somewhat drawn-out nature of this project has allowed us to track down a number of rare and unreleased sides, several of which appear for the first time on this release.

Since beginning the series, a number of technological advances in the field of sound restoration have appeared, allowing each time for greater fidelity to be extracted from the limited opportunities found in the grooves of acoustically-recorded discs, with their highly limited frequency and dynamic range.

One such advance is in the control of pitch instability - the "wow and flutter" inherent to one degree or another in all analogue recordings, and generally found to greater degrees as recordings get older. To be able to restore solidity of pitch to Rachmaninov's piano is to give it a degree of realism never heard before. Despite the aforementioned technical limitations, a few moments listening to the solo piano in the opening bars of the Piano Concerto No. 2, not originally issued, may have you pinching yourself - surely this is not the sound of a piano captured through a horn, cut into a disc being driven by weights, just months before the introduction of microphones? The delicacy of touch, the immediacy of the sound, the solidity and (relative!) realism of the piano's tone is quite remarkable to hear.

For many, the performance given by Rachmaninov and Stokowski here was preferable to their 1929 electrical remake. Here we take a step closer to that performance, alongside a panoply of single sides and previously unissued Wagner, Tchaikovsky and one Edgar Stillman Kelley, a composer who was new to me. My sincere thanks to all who make this release possible. A fourth and final volume in the series will follow within a month. 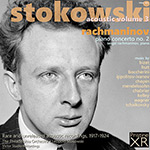 The metrical freedoms taken by the soloist-composer are a touch freer than in his remake, making this recording that much more uplifting and combustible ... a memorable achievement and it has been very well transferred here

This is the third of a projected four volumes in Pristine’s series devoted to acoustic recordings made for the Victor Company by Leopold Stokowski and members of the Philadelphia Orchestra between 1917 and 1924. I have long been skeptical about the value of orchestral recordings made with the acoustic process, prior to the introduction of the microphone in 1926. As anyone at all familiar with this primitive recording method would be aware, what is performing in these selections is not actually the Philadelphia Orchestra but rather a few of its members, clustered around a recording horn. Accordingly, a major issue in assessing this release is whether the sonic wizardry of Andrew Rose has been able to create the illusion of an actual orchestra playing in these recordings. The answer is “not entirely,” but the sound on this Pristine release is often substantially better than I would have expected, and there are portions where it is possible to overlook the absence of a full orchestra.

In the 1924 recording of the Rachmaninoff Concerto, the orchestral sound is acceptably full in tuttis, although opaque. Elsewhere, string tone is sometimes ample and sometimes thin or tubby, but the results remain thoroughly listenable. Surface noise from the source discs is audible but unobtrusive. What is truly remarkable, however, is the piano sound, which is full, rich, solid, and completely stable in pitch, although it is impossible to determine how closely this warm, rounded sound replicates the actual sound of Rachmaninoff’s playing. The sound of the Pristine remastering is in any case good enough to allow one to appreciate the performance, but the 1929 remake by the same performers remains preferable for full-orchestra sound and superior dynamic range. (I have that later recording on a 1994 RCA Gold Seal reissue, but there are other remasterings that are probably better.) Other than sound, the main difference between the two performances is the quicker main tempo for the slow movement in the earlier one. Both performances are distinguished by the composer’s effortless fluency at the piano, by a suppleness and elasticity that never strays into mannerism, and by pacing that is swifter than in most modern recordings.

Quality varies among the shorter pieces filling out the disc, but one area where Pristine’s treatment has unquestionably produced a substantial improvement is in freedom from the wow and flutter one would expect in material of this vintage. The four Bizet selections (recorded 1919–23) fare well sonically and interpretively. Bizet’s transparent orchestration is done comparatively little harm by the reduced complement of instruments, while Stokowski’s readings are lively but straightforward, without any fooling around with tempo. Liszt’s Second Hungarian Rhapsody (recorded 1920) is heavily cut, but the roughly half of it that remains is brilliantly played by the Philadelphians, and the menacing opening, with growling low strings, and the wild, headlong conclusion will impress the listener. The sharp staccato attacks at the very beginning were not employed by Stokowski in two later (complete) recordings of the piece, in 1936 and 1960–61. I don’t care much for the bloated arrangement of the Chopin Prélude or the equally soupy rendition of Gluck’s “Dance of the Blessed Spirits.” The sound in Ippolitov-Ivanov’s “Procession of the Sardar” (recorded 1922) is less good than in the Bizet and Liszt selections, and some of the wind playing seems not up to Philadelphia standards. The Midsummer Night’s Dream Scherzo (1917) suffers from a boomy, murky bass and a relatively high noise level. Chabrier’s España (1919) is heavily cut, and the sound does not much disguise the limitations of the acoustic recording process. The march from Tannhäuser (1924) is an excerpt and cuts off abruptly after three minutes. The sound is brassy and not much like a full orchestra. The excerpt from the third movement of Tchaikovsky’s “Pathétique” (1917), in contrast, starts off in the middle of the movement. The balances initially seem way off, and there is some imperfect ensemble, but things improve. It is difficult to know how closely these early recordings actually represent Stokowski’s interpretations during this period and the extent to which they may have been influenced by the exigencies of the primitive recording process, but it is noteworthy that he slows the tempo at exactly the same point in this 1917 recording as in his 1945 live Hollywood Bowl performance (Memories), although tempo shifts in the earlier performance are somewhat less pronounced. The Wagner and Tchaikovsky selections and the one by the obscure American composer Edgar Stillman Kelley (1857–1944) are previously unissued.

This release demonstrates that some worthwhile listening can be drawn from the grooves of these early orchestral recordings. Rachmaninoff’s earlier recording of his Concerto No. 2 is, of course, the most valuable item on the program, in terms of historical significance and performance and sound quality, and its presence on the disc mandates a recommendation. The remaining selections will appeal primarily Stokowski completists but are worthwhile bonuses.

Pristine Audio reminds me of a plate-spinner on the variety stage. It has a large number of plates spinning at the moment, with multi-volume series devoted to Beecham, Stokowski and Monteux just three that have come my way in the past few weeks. The third volume of their series devoted to Stokowski’s acoustic recordings (see reviews of Volume 1/a> and Volume 2) has a major work, and then a raft of lighter material, several of which pieces will be of considerable interest to Stokowski collectors as they have never before been issued.

The major work is Rachmaninov’s Second Piano Concerto with the composer as soloist. This 1924 recording shouldn’t be confused with the later electric remake. The strange history of its missing first movement – never issued at the time, thus forcing purchasers to buy a torso of the work – can be explored elsewhere, though suffice to say it first reappeared commercially in RCA Red Seal’s Rachmaninov edition of his complete recordings. It’s known that he played a Steinway Model B here, which was raised on a platform to allow the horn better to pick up his sound – quite a common practice at the time – and the results were exceptional. Given that Rachmaninov never approved the first movement for release, listeners would have had to start with the slow movement but for us no such impediment exists. It is one of those little ironies of recording history that Victor was recording a pretty complete complement of orchestral players back in 1917 but in succeeding years they actually cut back, so that by the end of the acoustic era the Philadelphia often had around 38 or 40 players in the studio. Any bass reinforcements in this Rachmaninov recording have been utilised quite subtly. The metrical freedoms taken by the soloist-composer are a touch freer than in his remake, making this recording that much more uplifting and combustible. It is, in any case, a memorable achievement and it has been very well transferred here.

The remainder of the programme is graced by a succession of single-sided sweetmeats. The quartet of Bizet gives the brass and winds a workout in particular – the March of the Smugglers is notably well played – and whilst this is by no means the first recording of Boccherini’s Minuet, it is assuredly one of the most suavely played. Ippolitov-Ivanov’s Procession of the Sardar from the Caucasian Sketches Suite No.1 offers some exotic fair and Stokowski’s arrangement (and the orchestra’s performance of Chopin’s Prelude in E minor) is persuasive: other Stoky Chopin arrangements were not always so tasteful. The Gluck is, alas, too bass heavy and lugubrious but the 1919 Chabrier España Rhapsody makes up for it. The last three pieces have never before been released. Like everything else, the sound is excellent for the 1917-24 time period. We hear the second part of the Scherzo from Tchaikovsky’s Sixth Symphony, and part one (only) of Tannhauser’s Festmarsch, which duly stops abruptly. But the gem here is the piece by the American composer Edgar Stillman Kelley whose The Red Queen’s Banquet, from his Alice in Wonderland suite, offers some busy material. In fine sound, it brings Kelley to the attention of contemporary listeners and one wonders what else is out there by him.

Full documentation can be found on Pristine’s website, as there isn’t much room in the disc for much beyond a brief Producer’s Note and the running order.