The unsettling years immediately following the end of World War II are reflected in the two main pieces on this release.

Shostakovich’s Symphony No. 9 received its première on 3 Nov 1945 in Leningrad. It was the composer’s first post war symphony and was intended as the third of a war trilogy. The first two parts of the trilogy, the much longer 7th and 8th symphonies depicted the heroic struggle of the Soviet people against Nazism. This final part was supposedly a celebration of victory but actually turns out to be more of a celebration of life. Shostakovich himself said a ‘bright mood predominates’, and even described it as a ‘merry little piece’ that musicians would enjoy but critics would ‘delight in blasting’. Serge Koussevitzky invited Shostakovich to the US to conduct it ultimately it was Koussevitzky himself who would deliver the American première at the Berkshire festival on 25 July 1946. The modest proportions of the 9 th symphony compared to the two previous symphonies was immediately apparent with the New York Times commenting that it was ‘prevailingly gay’ with ‘no pretences to the epic’. Shostakovich was right about the critics: the New York World Telegram grumbled that ‘The Russian composer should not have expressed his feelings about the defeat of Nazism in such a childish manner.’ A second performance, a few weeks later, was broadcast nationally by ABC and is the earliest extant live performance of the symphony.

Bernstein’s Symphony No.2 was based on W. H. Auden’s poem ‘The Age of Anxiety’. The poem, dealing with man’s shifting place in a turbulent and ever-changing world, won the Pulitzer Prize for Poetry in 1948. Leonard Bernstein described the poem as ‘one of the most shattering examples of pure virtuosity in the history of British poetry’ and recalled that it ‘began immediately to affect me’ on first reading and that composing a symphony based on it ‘acquired an almost compulsive quality.’ In part one the story revolves around four characters drowning their sorrows in a bar, struggling to find meaning and direction in an ever more bewildering world. Part two finds the same people at a soulless party which no one is really enjoying, but this spiritual emptiness eventually gives way to an affirmation of faith and hope. Bernstein dedicated the symphony to Serge Koussevitzky marking the end of his 25-year reign as conductor of the Boston Symphony Orchestra. The symphony premièred on 8 April 1949 with this broadcast on the following day.

Howard Hanson’s Serenade for Flute, Harp & Strings, Op. 35 premiered April 1946 at Eastman School of Music in Rochester during an American Music Festival. Hanson was the Director of the Eastman School of Music between 1924 and 1964 and although little known today his music was performed by the New York Philharmonic, the NBC Symphony, the Boston Symphony and the Metropolitan Opera. His opera Merry Mount is available on PACO108, his 4 th symphony on both PASC536 and PASC292 and his 5th symphony on PASC332.

XR remastering by Andrew Rose
Cover artwork based on a photograph of Koussevitzky with Leonard Bernstein after a 1949 performance of Symphony No. 2

Bernstein Symphony No. 2, 'The Age of Anxiety'
concert of 9 April 1949
first recorded performance 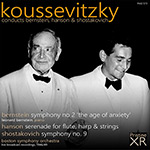