"A fine performance matched by a first-class recording" - Gramophone

Both of these recordings, whilst fundamentally sound, have benefited enormously from a thorough restoration and XR remastering - given the recording dates, right at the beginning of the adoption of tape mastering and LP distribution, the myriad of now-correctable faults was entirely unsurprising. Pitch generally fluctuated between about A=335Hz and A=440Hz, and these variations have been evened out to concert pitch - but the coda of Concerto No. 2 came in at A=432Hz - a significant drop suggesting a section edited in from a very different recording.

The tonal difficulties suggested in contemporary reviews sound even more pronounced today, I would suggest, given our far improved listening equipment over a reviewer of the early 1950s. Fortunately we now also have the technology and expertise to address these shortcomings. I've also been able to make significant inroads on tape hiss and an assortment of extraneous noises and irrirants. The results here have proved particularly satisfying - a full, clear, clean sound has been discovered both for piano and orchestra to an extent that demands a critical reassessment of both of these recordings. My sense is that, as has happened regularly before, the listener will now find significantly more to enjoy here than in any previous release.

XR remastering by Andrew Rose at Pristine Audio, February-March 2012
Cover artwork based on a photograph of Wilhelm Backhaus 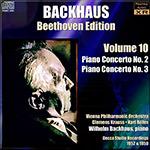 Backhaus gives it a performance that is markedly more sensitive than some of those he has lately accorded the solo sonatas ... Throughout everything is clear and in place; a fine performance matched by a recording that manages to be first-class in spite of—or perhaps because of—the absence of any endeavour to be sensational. That quality, indeed, would not be in place; and sobriety of the order that is unwaveringly maintained throughout this disc is not at all to be despised. The millennium will occur when this standard is the normal minimum to be expected of all records offered for public sale...

Backhaus's performance has his usual brittleness and precision. He is here the classic-minded performer, more interested in form and pattern than in the personal expression of Beethoven the man ; and his treatment suits this work better than it would, perhaps, the G major. The orchestral playing is discreet rather than forceful ; there is, to one pair of ears, a slight over-prominence of the piano, just as there is a slight excess in the use of the damper pedal. The recording as such is not wholly satisfactory, for it suffers from that odd quality to which long-players seem to be liable—unevenness. The piano jangles somewhat on its first entrance, then the tone warms up, then there is some more jangling, and then, in the cadenza' the piano tone comes properly into focus (though even here it is a little hard). On the first side the bass is light...

Great second, problematic third. For sure, Backhaus knows how to play the piano. No one has ever questioned his regard for, even worship of Beethoven. However, I found his complete traversals of the piano sonata cycle inconsistent, to say the least. Superb, sharply-etched readings stand side-by-side with clueless, shapeless ones. Furthermore, a certain corporate blandness hangs over too many -- a "white paper" interpretation, rather than a personal one.

Consequently, I approached this disc gingerly. I set my expectations low, and Backhaus confounded them with strong performances in both cases. The Classical period sorted concertos into various types: lyrical, pastoral, divertissement, and martial or military among them. Beethoven concentrated exclusively on the martial concerto, probably since it best fit his style of extreme dramatic contrast. Most performers treat the Concerto No. 2 like a poor relation. They put up with it but would prefer to spend time communing with Nos. 3 through 5. For years, I made excuses for the Second as almost student Beethoven. I had the excuse that Beethoven himself afterward rated this and No. 1 as "not among my best," but I feel ashamed of myself. Backhaus changed my mind. I now don't think of the work as an inferior Beethoven concerto, lacking the innovations of, say, No. 4, but a superior Mozart one, moving with great assurance within the conventions of late Classicism. Years later, Beethoven himself still thought enough of it to write a cadenza for it.

Formally, the concerto follows the usual lines: a sonata first movement, an A-B-A song slow movement, and a rondo finale (A-B-A-C-A-B-A). However, the level of thematic invention and variation remains high throughout.

Backhaus glitters in the quick movements and sings beautifully in the middle one. However, Böhm and the Vienna Phil also contribute substantially to make this one of the great recordings of the concerto. In the first movement, the Vienna strings, forgetting their usual suavity, give their lines exciting little nips that perk up your ears. In the second, Böhm finds the depth in a movement that too often just goes by. Both he and Backhaus convince you that this is one of the great Beethoven adagios. The final movement is noteworthy for the way Backhaus and the orchestra flick the syncopations of the main theme. Backhaus's passagework sparkles. The near-perfect ensemble balance reinforces the unanimity of intention between soloist and orchestra.

The third concerto lacks that strong connection. First, under Krauss the orchestra's attack (particularly the strings) becomes spongy. The winds, for the most part, manage sharp attacks but combined with the strings, the ensemble is often raggedy, particularly not really what you want in such a martial concerto. You miss certain important thematic details from the orchestra, not helped by a poor recording balance on the original LP which puts the players slightly too far back in the image, like a consort who walks seven paces behind the ruler. In the first movement, another c-minor storm like the Pathétique Sonata, the orchestra handles the introduction beautifully, with superbly well-managed crescendos. However, as the movement progresses, it begins to lose focus. Backhaus becomes the rather stern marshal, apparently taking direction over from Krauss by an insistence on the rhythmic integrity of the measure. I reserve most of my admiration for Backhaus, who gives a vivid performance. He uses his own cadenza, which starts out well, but sometimes veers away from Beethoven into Liszt-Rachmaninoff territory (I think especially of a loud sequential passage of articulated diminished-seventh chords). On the one hand, it's great piano playing, but I'm not sure what to make of the stylistic difference. If we long for the days when the soloist actually improvised his cadenza, then I think we must expect an individual take on the material and take into account that the soloist has heard music the composer has not and that such experience likely goes into the improvisation. The question then becomes the worth of the cadenza. I think, ultimately, that the cadenza shows me less about Beethoven and more about Backhaus the pianist, the wizard of the keys.

The second-movement Largo is a variation set. Krauss and Backhaus go for Profundity (a peeve of mine), but, by Granny's undies, they pretty near pull it off. Backhaus toes the line of pokey, but manages to keep the musical line spinning. The strings of the Vienna Phil are gorgeous here, Backhaus's pedaling as well. As far as I can tell, he actually follows Beethoven's pedaling indications, not usual enough to take for granted.

The performers regard the rondo finale in an off-beat way. Usually, players, considering other Beethoven c-minor scores, look to storm the heavens. Backhaus and Krauss work to stress intimacy and ensemble.

Backhaus's second I think an essential performance, the third less so, though by no means routine. It's a reading you add once you've experienced more basic ones. Pristine delivers one of its better sonic reconstructions. Extraneous noises and distortions have been cleaned up. More importantly, in LPs of this era, the sound tends to reproduce as if three dimensions have been flattened to two. Pristine has an ap for that: you seem to hear the ambience of the hall.
S.G.S. (November 2012)