These transfers were made from quiet US Columbia pressings generously donated to Pristine by Mr. Albert Schlachtmeyer. Overall quality was very good, though some sides suffered from swish, though I was able to minimise this by careful and varied stylus selection. The final piece, Mater Ora Filium, was recorded at a significantly higher level than the rest of the album and some blasting during louder sections had to be dealt with, particularly during the final side. On the plus side this louder recording did eventually allow for a much lower noise floor after processing than in either of the instrumental works.

All transfers from US Columbia Masterworks 78rpm set M-386 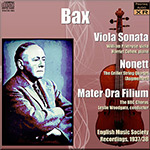 In all major matters this issue is an outstanding success

I was only able to allude briefly to the issue of this album in last month's GRAMOPHONE, but if there are some readers who are hesitating whether to purchase it, let me assure them that, unlike some other albums of music by contemporary composers, everything in it is not only representative of Bax at his best, but splendidly recorded. On that point the only place where some improvement suggests itself is in the viola sonata where the upper reaches of the piano sound too distant: the bass is well balanced with the solo instrument. The sonata itself is a work of finely sustained imagination and deep emotion, written, as Robin Hull, who provides the excellent notes, says, in a mood of" impassioned and sombre beauty alike in movements of vehemence and meditation." It is rich in melody of a kind immediately apprehended and has a middle movement of tremendous energy and power. I could wish, irrationally, that Bax had not disturbed that mood with a rhapsodic and slow version of this third theme which seems to me to slacken dangerously the tension of the movement.

Mr. Hull, by the way, sometimes leads one to expect more than one gets. No doubt he was writing from the score and not from the records, but some of his adjectives are not realised in the performance. Thus on the last record of the first movement I doubt if the ostinato figure will be heard as " brutal" or the reentry of the first subject as " exceedingly strenuous": nor does the climax at the end of the second movement strike me as terrific." Surely, too, the " rather mysterious chords on the piano " that open the last movement are related rather to the ominous ones that begin the coda of the previous movement than to the gentle ones that begin the first movement. The "satanic" mood, that is, of the scherzo still prevails until dispersed by the brooding sadness of this final movement. Harriet Cohen played the work with Lionel Tertis at the 1924 Salzburg Festival of the International Society for Contemporary Music and her close association with flax's music gives her complete understanding of it. She has one of the finest viola players of to-day, William Primrose, as her partner with the result that the performance is of the finest quality.

Forbes [sic] Watson (bass), Gordon [sic] Slater (flute), Frederick Thurston (clarinet), Leon Goossens (oboe), and Marie [sic] Korchinska (harp) join the Griller String Quartet in the performance of the Nonett. This work is indeed a striking example of Bax's" remarkable flair for exploiting the piquant blends and contrasts of colour which such a combination makes possible." But interplay of colour is by no means the only interest in this charming work. It defines what we feel but cannot accurately express in words by romanticism: but again, beyond its colour and its lovely evocative sound, its emotional significance may perhaps be found in the dedication to the memory of Eric Verney-Cohen. The Lento section of the first of the two movements has a trance-like beauty which is found again at the end of the second movement. I found this short work extraordinarily moving.

Finally we come to Bax's magnificent setting of the old carol Mater Ora Filium, which some readers will perhaps still possess in the H.M.V. version issued long ago. It is an exceptionally difficult work to perform though the writing sounds beautifully fluid and grateful. Leslie Woodgate secures an admirable rendering from the B.B.C. chorus and the recording is without any of the chatter or constriction which often afflicts such recordings.

It is a pity that the words—though fairly clear where the writing allows—were not given in the booklet.

In all major matters this issue is an outstanding success and I much hope it will be taken up sufficiently vigorously to encourage Columbia to give us an album of Bax's orchestral music.