We used two different source recordings in order to put together for the first time a complete record of this historic concert. Part One was recorded from an off-air test disc, Part Two from a re-broadcast of NBC's master lacquers. As such there is a slight discrepancy in sound quality, with marginally higher hiss levels on the first disc. Copies of the first half of this concert have circulated amongst collectors for some time, and the Graener has been issued on CD. I also believe the Debussy and Dvorak recordings surfaced on LPs some years ago, but never onto CD.

This new restoration tackles some of the inherent problems of the aircheck disc for the first time, using audio technology not previously available to restoration engineers to remove or dramatically reduce radio interference and also tackle various hum frequencies and assorted radio whistles present throughout the original master. It has also been possible to fix a number of drop-outs in the recordings we were presented with, which had been dubbed onto open-reel tape some years ago. The original recordings were of course mono, but the tape hiss from later transfers was wide and stereo. I have narrowed the stereo field of this hiss, though some very mild stereo spread may still be evident in upper frequencies.

CD TWO
DVOŘÁK Symphony No. 9, "From the New World" 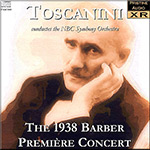