These recordings, made just five years apart, demonstrate in their original forms the advances in recording technology that took place between 1952 and 1957. The Tchaikovsky, in mono and with limited frequency extension, sounded as if from another era. But it's the same orchestra and conductor, and I've attempted to convey this in the remastering of all three works, with significant benefits to the earlier LP's sound, which is now considerably improved and realistic, though some very high frequency "fuzz" is occasionally audible.

The two stereo recordings were much more successful, and here I've been able to make the very most of the full extension both at the top end and in the very deep bass, to convey the wonderfully evocative and dramatically Spanish intent of the conductor.

XR remastering by Andrew Rose at Pristine Audio, June 2012
Transfers by Edward Johnson
Cover artwork based on a photograph of Antal Doráti 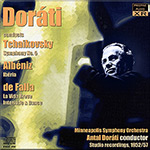 Dorati grasps the fiery work with both hands, throwing none of it away. Right from the crisp "till ready " of the allegro of the first movement it is clear that this is going to be an alert performance and the alertness does in fact continue until the very end. Sometimes, arguably, a bit too much so: in the slow movement, after the pizzicato chords, when the violins take over the horn's original tune—is this not pushing on a bit too vigorously ?

The orchestra responds to Dorati with some very alive playing. The violas in particular are unusually strong—this was noticeable, too, in the same orchestra's recording of the Mozart G minor Symphony, reviewed here this month ; could it be anything to do with the microphone placing ? "A single Telefunken microphone hung about 15 feet directly over the conductor's podium" is the recipe; it does seem strategically placed for the violas. (Not, in passing, for the bassoons— their last notes to the first movement of the Tchaikovsky are quite lost.)

The recording is vivid, matching the performance ideally. With the opening of the slow movement re-made, I would have little difficulty in believing this to be the best available version...

I started here with the Vida Breve extracts —the atmospheric Interlude and the gay First Dance. Excellent playing, and very life-like recording in both mono and stereo versions. A slight lift of the eyebrows at what struck me as an exaggerated broadening of the tempo at the heavy string theme in the Dance, but on the whole very good indeed.

And then, having dug out the Argenta version for comparison, I settled down to the Arbós orchestrations of five of the Iberia suite—Evocación, El Corpus en Sevilla, Triana, El Puerto and El Albaicin. Critics seem to spend most of their time sighing "If only..." In this case, faced with first-rate playing by the Minneapolis Orchestra and fine recording by Mercury, one's constant thoughts are "If only Antal Dorati weren't in such an almighty hurry all the time..." and "If only Argenta could have had the advantage of this orchestra and the best modern recording..."

I heard Antal Doráti conduct Tchaikovsky’s Fifth Symphony in concert with the National Symphony at the Kennedy Center in the mid 1970s. In those days the only recording of the piece I owned was Otto Klemperer’s stately and spacious one, so Doráti’s quicker and more nervous way with the score left me baffled. I did enjoy the other two works on the program, a Berlioz overture and a piece by John Alden Carpenter. The present recording from Minneapolis is a great one—but is it necessary, considering Doráti’s later London Symphony stereo version on a Mercury Living Presence CD? Doráti’s LSO recordings were generally rehearsed in the studio without a prior performance. His Minneapolis LPs, on the other hand, were usually recorded in conjunction with the orchestra’s concerts. The monaural Tchaikovsky Fifth sounds more lived-in by the orchestra, its members nevertheless are on the edge of their seats throughout. The tempos in Minneapolis are significantly faster, too, except for the Waltz. While the 1952 sound engineering doesn’t compare with the later stereo, Mercury’s single microphone technique captures a realistic balance, all the more thrilling given Doráti’s control over the orchestra. So, even if you have this conductor’s stereo Tchaikovsky Fifths from London and Washington, D.C., you will still want to hear this exceptional performance from Minneapolis.

The introduction to the first movement is simple and unaffected, with beautiful sostenuto playing. Doráti takes the main section of the movement quickly, with terrific rhythmic lift throughout the orchestra. It really rocks. Doráti seems to find a parallel here with the opening movement of Schubert’s Ninth Symphony: Both feature a slow introduction, and Doráti’s tight rein on the main section’s structure, with wonderfully characterful interjections by the first chairs, highlights the resemblance. The strings blend beautifully, producing thrilling sonorities. The slow movement receives the most exciting rendition I’ve ever heard. It begins sotto voce with the strings and first horn. The strings soon present their theme with virile passion; there’s nothing weepy here. Doráti presses forward with the tempo, as is familiar from his great recordings of the Tchaikovsky ballets. The next movement is not your grandmother’s Tchaikovsky waltz. Doráti’s tempo is quick, urgent, and symphonic in nature, with none of the little nudges it would receive from Mengelberg or Stokowski. In the comparatively subdued passions of this movement, the tight orchestral discipline seems even more striking. Doráti takes the last movement, both in the introduction and the main section, at surprisingly unhurried tempos, given what has come before. He appears to see this movement as a narrative structure, which he builds without interference. There is an inexorable push to the final peroration and coda, which are totally unsentimental. Thus ends a Tchaikovsky Fifth of great insight and taste.

The conductor Enrique Fernández Arbós’s orchestration of selections from Isaac Albéniz’s Ibéria is a wonderful symphonic showpiece that is programmed all too rarely. Doráti’s recording was the first I owned, and is still my favorite. As a master of orchestral sound, Doráti remains unsurpassed, even by Ansermet. In the opening movement, the Minneapolis players set the atmosphere beautifully, and the cello tone is particularly gorgeous. Doráti demonstrates the rhythmic acuity of a great ballet conductor in the next movement, El Corpus en Sevilla. The trumpets here produce a terrific Latin sound. The big tune in Triana is wonderfully plush and swinging, worthy of Carmen Dragon. El Puerto has a sultry, Moorish quality, while the concluding El Albiacin reveals a mysterious world of shadowy delights. Doráti’s rendition of the Interlude and Dance from Manuel de Falla’s opera La vida breve is the most intense I know. The first violins perform like one great violinist. Perhaps Rafael Druian, the concertmaster, is responsible for the bowings.

The Spanish works were released on a Mercury Living Presence CD I haven’t heard, but I can’t imagine anyone being dissatisfied with Andrew Rose’s remasterings. On my Mercury Wing LP, the Albéniz has great presence but a rather boxy quality. Rose has greatly opened up the sound around the orchestra, even if the early stereo sometimes lacks definition. If you must have digital sound, Enrique Bátiz is excellent in the Albéniz and Jesús López-Cobos’s complete version of La vida breve is worth having as well. I like Leonard Bernstein on DG in the Tchaikovsky. While Andrew Rose is turning his attention to early Mercury recordings with Doráti, I hope he won’t neglect this conductor’s mono French album, which contains my favorite Pavane for a Dead Princess. As for the Tchaikovsky Fifth, it is one of the most distinctive accounts I know. In Doráti’s hands, there’s not a tired moment in the piece, and more than a few which are really startling.

This article originally appeared in Issue 36:3 (Jan/Feb 2013) of Fanfare Magazine.