Milanov and Björling in the legendary 1955 Victor recording of Aïda

Widely regarded as one of, if not the finest Aïda ever recorded, this 1955 mono Rome recording certainly sits among the greatest achievements of one of the greatest cast of soloists ever assembled to perform it. It is of course unfortunate that it missed out on the stereo era by such a short time; the Ambient Stereo version presented here goes some small way to alleviating this, giving as it does a sense of breathing room and space around the centrally located performers.

These transfers were made from a near-mint set of original RCA Victor Red Seal LPs. Although the records were in amazing condition, they did highlight the sonic variations of the original recordings, made over a period of just over two weeks in the Roman summer of 1955, and I've done what I can to alleviate this wherever possible. The Victor microphones regularly picked up traffic noise in the background - the sound of cars accelerating away from a junction outside the Teatro dell'Opera di Roma was a regular feature of the recording, and again I've done my best to digitally excise these wherever possible, without touching or harming the frequencies occupied by music.

The entire recording has been fully XR-remastered, with careful re-equalisation and the very subtle use of convolution reverberation to help "place the listener" in the best seats in front of the stage of one of the finest opera houses in the world. The end result is, I hope, the best presentation yet of one of the great opera recordings of all time. 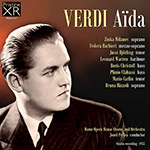 Anyone who loves Aida or grand opera should not be without this set. It is an essential part of any operatic collection, and has never sounded as good

This 1955 recording of Aida has rarely been out of print since its initial release, and is considered by many to be a true classic of the industry. Since it has been available in many different RCA issues, why has Andrew Rose of Pristine taken it on? I’m sure that its very status as a classic motivated him, to ensure that it would remain available and in the best possible sound. His XR process (a simulation of stereo without the directionality) has indeed given the sound some needed space without an artificial echo-like reverberance. Neither on LP nor various CD incarnations have I heard it sound as natural and rich as it does here. There is the proper space around voices and orchestra, and the perfect balance between them.

Aida has been fortunate on disc. One would be a fool to say that any one recording is the best. A case can be made for Callas/Tucker/Serafin, for Price/Vickers/Solti, Caballé/Domingo/Muti, and a few others as well. As I write this, I have not yet heard the new Harteros/Kaufmann/Pappano Warner recording. But there is something unique about this one. Actually, more than one thing that is unique.

First, there is the matter of sheer vocal presence—voices that announce themselves immediately as voices of importance. Every single principal here possesses that, starting with Christoff’s Ramfis at the opera’s outset. These are distinctive, immediately identifiable voices that you will never mistake for anyone else. Then there is a sense that these singers have all been steeped in the idiom. Milanov was the mainstay of the Met’s Verdi wing for more than a quarter century; Björling did not sing this taxing role at the Met (he did take it on in smaller European houses) but he certainly had been singing Verdi regularly since the 1930s. Barbieri was early in her career, but she was already one of the leading Verdi mezzos of her day, and of course Leonard Warren virtually defined the term “Verdi baritone.” The often underrated Romanian conductor Jonel Perlea is another asset here. This may not be the kind of electric conducting that we hear on the Solti set, but it yields virtually nothing in its understanding of the Verdian phrase-shaping to the more famous Italians such as Serafin. Only some crude brass playing in the ballet and march detract from the otherwise fine orchestral performance, with Perlea balancing lyricism and power equally.

By 1955 Milanov was nearing the end of a very long career, and there are some fortissimo passages that show a beat or a thinning of the tone. But they are few and far between, and the soft singing is ravishing. “O patria mia” is miraculous—one of the great performances of that aria on disc, and her soft singing and incredibly even legato at “La tra foreste vergine” and “O terra addio” is a master class for aspiring singers. Björling matches her in both of those duets, and overall produces his glorious sound evenly at all dynamic levels. It must be said that he does not exhibit the imagination that we hear from Milanov, and his lower register seems overpowered by the music. Of all tenors, Björling could have given us the ending of “Celeste Aida” as Verdi wrote it (and as I am told Kaufmann does on the new recording); instead, we get a rather lumpish loud conclusion. Still, the voice itself is a miracle, he shapes most of the music with a completely natural feel, and that soft singing with Milanov will remain in your memory long after you have finished listening. Warren too is short on imagination, but oh, what a sound. This has to be the kind of baritone sound Verdi heard in his own mind when he wrote Amonasro’s music. Warren is not a complete cipher; he does inflect with some specificity, phrases with sensitivity, and he is caught up in the drama. When one hears what a Gobbi can do with this part, one realizes what Warren doesn’t bring. But then again, no baritone in the past 60 or 70 years has given us the richness of sound that Warren has. As for the rest of the cast, Christoff may be a bit unidiomatic, but he is surely the most impressive Ramfis on disc, and Plinio Clabassi is a fine King. Mario Carlin and Bruna Rizzoli, as the Messenger and Priestess, round out a cast that has no weak links.

You can download from Pristine’s web site, or order the two XR CDs; in order to fit the opera on two discs, Pristine puts a break in the second act, but it is well chosen. Anyone who loves Aida or grand opera should not be without this set. It is an essential part of any operatic collection, and has never sounded as good as it does here.

The summer of 1955 was a fortuitous year for Verdi’s Egyptian opera Aida. Two recordings were produced, one from RCA conducted by Jonel Perlea and the other from EMI conducted by the great Tullio Serafin. Common to both and lending both excitement was Italian mezzo Fedora Barbieri as Amneris. One always looks forward to listening to Aida; after all, does it not have everything? There is not only great music, but drama, singing and of course the spectacle, all of which are of such quality, you need great singers to handle their roles effectively and easily; and to an extent, our classic recording from RCA, now Sony, achieves this.

Croatian-born soprano Zinka Milanov plays the title role and by this stage of her career is the most frustrating member of the cast. On the good side, as John Steane says in his survey on Aida, she “has something in common with (Montserrat) Caballé, excelling in the soft high notes which at best were pure velvet.” On the down side, Philip Hope-Wallace in his original review for Gramophone says, “even parts of ‘Ritorna vincitor’ are laboured: in her big scene with her rival and again in the two strenuous duets by the Nile she is overtaxing herself. Once she makes a mistake in the first part of ‘Su dunque’....” He continues rather cheekily, “... and her cries of horror when her father breaks the bad news to her are strange dowager hoots.” There is something to both of these comments.

Jussi Björling as Radamès sings wonderfully throughout and certainly poetically, but he also sounds relatively cautious with Perlea’s spacious approach. This is a noble and lyrical Radamès, but perhaps not as involved as some of his contemporaries and successors in the form of Franco Corelli and Carlo Bergonzi (or dare one say even Gigli, but only in a 1937 live performance from Berlin, not the commercial set). Björling is correct, but he also sings the Nile scene with much excitement and plenty of voice. He also manages to attend to Verdi’s markings with a gorgeously floated B♭at “il ciel de’nostri amori.” Perhaps the most exciting performer is Barbieri. She certainly affects Jussi, with their scene together catching fire. She is also highly effective in her scene with Ramfis where she pleads for Radamès, spitting out “infamia.”

Pristine as ever produce good sound, but this XR ambient stereo version which gives a smidgen more space around the voices, especially on headphones, also to these ears, makes the recording sound just a bit older, with the voices also seeming to sound a bit tinny on occasion. There is no libretto or information with this latest release. Sony has also recently released this in straight mono, but on three discs with a fourth CD-ROM for the libretto.

In the final scene, “O terra addio,” heaven does come forth with some gloriously poised singing. Here both singers respond beautifully to Perlea’s conducting, with Björling matching Milanov—as Stephen Hastings says in his well-researched book on Jussi, The Björling Sound—in every phrase and surpassing her “in the penultimate ascent to B-flat where unlike his partner, he adheres to Verdi’s dynamic markings in introducing a blossoming crescendo after the piano attack.” This is both wonderful and heavenly and not beaten anywhere. For Jussi fans and fans of great singing, rush out and buy this Aida.