Newly transferred and XR remastered, these are superb!

The two sonatas here were transferred from near-mint 78s from the collection of Paul Steinson, to whom we are once more very grateful. Neither presented any major difficulties in transfer or restoration, and both have come out remarkably well - in their post XR-remastering states there's remarkably little difference in sound quality between the 1935 Elgar and the 1946 Rubbra beyond slightly raised a degree of surface noise in parts of the earlier recording.

The Gramophone's review of the Elgar complains of a distance in the piano which I suspect might be due to microphone positioning relative to the piano's soundboard - the balance isn't too bad but the piano has a muffled tone to it which suggests the lid being partially closed or pointed away from the microphone, whereas Sammons is close and clear. The 1920s recordings display similar traits, suggesting a tendency for the engineers to concentrate overwhelmingly on capturing the violin - notably on none of these is the pianist credited. One should also remember that the engineers who recorded the final two pieces here, both acoustic recordings where recording violins required the use of modified instruments to boost their volume, may well have been the same who worked on the earlier electrical recordings - with similar priorities subconsciously in mind perhaps? 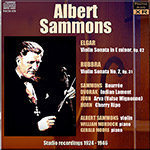 There seems to be a general opinion that Elgar is not at his best in his chamber music and that he writes with no real understanding of the piano. One critic says that the chamber music works measured as they must be (italics mine) with the composer's own best work are a little disappointing.

But why must such works be measured against those of big scale? Surely it is better to assess them on their own ground realising that, as Mr. Maine well says, that "the conditions of the sonata and quartet call forth a wholly different aspect of his (Elgar's) creative spirit " without any resultant cramping of his style, for he did not attempt to express symphonic ideas through the chamber music medium.
The Elgarian trochaic rhythm appears before the music has gone very far, also the Elgarian tenderness and nobility. I must confess to finding the episode consisting of widely spread arpeggios for the violin a little dull and quite lacking in the "poetic serenity which may well have been induced by the woodland environment of the cottage where the work was written." The end of the movement, too, is conventional and manufactured.

No qualifications need be made in regard to the slow movement, which is both original in layout and beautiful.

This Romance is worked out with two well-contrasted ideas, one sad and deeply expressive, the other whimsical and wayward. It is indeed a pity that the passionate climax to which the music is rising is broken off by the necessity of turning over the record. The opening theme of the final movement, with an attractive waviness in it, is of a peaceful nature, a feeling which is maintained throughout most of the movement, though towards the end of this side a deeper emotion disturbs the music and the development is occasionally vigorous. Albert Sammons' tone is as unfailingly beautiful as his technique is superb, but it is, I feel, a thought too sweet for a perfect interpretation of the music, which demands a more masculine impulse at times. Though Elgar's writing for the piano is certainly not adventurous (which makes the pianist's part in this sonata very suitable for the average amateur), William Murdoch remains rather too much in the background and the balance is therefore uneven. Nevertheless this recording is certainly one to give great pleasure.