Pre-amble: At the time of writing I've been acquainted with these recordings for just one week, and during most of this time I've been engaged in the transfer, remastering and, above all, de-swishing of these records - at 80rpm that makes for a potential of over 5000 swishes, each to be individually removed through the course of these two recordings. Now that I can sit back and listen to the results I am utterly bowled over by the quality of the recordings, captured by the earliest and most primitive microphones some 85 years ago.

To have been a recording engineer for Columbia Records in London in the mid-1920s must have been a wonderfully exciting and fabulously rewarding time! The contrast between what had been possible in the first few months of 1925 using only acoustic horns to capture sound, and what was being achieved by the end of that year in the studio, and then in 1926 out on location at the Wigmore Hall, must have been truly incredible for all involved. We have seen many advances in recording technology since then, but I do believe that the years 1925-6 hold the keys to the biggest single advance ever made in the field - as these recordings so brilliantly demonstrate.

I am very grateful to collector Paul Steinson for the loan of these rare 78rpm discs used for these transfers. Both sets were in excellent condition and offer a remarkable insight into the technical possibilities of recording opening up for Columbia's engineers in the first months of the age of electrical recording (i.e. with microphones) which had begun just six months prior to the recording here of the Mendelssohn.

We have here two very different recording locations. The first appears to be a typical studio of the time, though the actual location is unknown. The acoustic was rather dry and as a result, although the instruments were clear and direct, the overall sound was not particularly complimentary to the musicians. In order to ameliorate this I've used a small amount of convolution reverb to 'place' the musicians in a more typical performance acoustic - in this case the small hall at Santa Cecelia in Rome seemed most helpful, and the acoustic replicates precisely that of a central seat on the seventh row in the hall.

By contrast, the Columbia engineers opted to record the Beethoven "on location", at London's Wigmore Hall, and one is immediately struck by the presence of the hall acoustic. It's a remarkably successful recording for its era, managing to find a superb balance between the hall acoustic and the direct instrument sound, and clearly very different to the Mendelssohn.

Both sets of discs were quiet British laminated Columbia pressings in superb condition. A degree of swish was present on most of the sides, and occasionally this required the use of a narrow-profile stylus for all or part of a side to find a less swishy height in the grooves. Both have responded incredibly well to XR remastering, and I've been able to bring out an excellent bass response whilst eliminating some rather heavy bottom-end rumble. In both cases the performances themselves are superb!

XR remastering by Andrew Rose at Pristine Audio, January 2011
Cover artwork based on a photograph of Albert Sammons
Total duration: 62:21 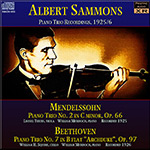