A classic Kreutzer from one of the greatest British violinists

I am very grateful to collector Paul Steinson for the loan of these rare 78rpm discs used for these transfers. Both presented some initial difficulties - the first disc of the Kreuzter Sonata appeared to have seen far more use than any of the others in the set, and my initial impression was that this had rendered it unusuable, with excessive surface noise and scratches. Fortunately this was very much a problem that was only surface deep - when I experimented with different stylii I discovered that, by using a diamond ground to approximately 20% narrower than usual, I was able to track a 'sweet spot' in the grooves which slipped under the wear and tear and provided a very clean and clear sound for any record of this era.

Thereafter it's an astonishingly clear recording, with a nice ambient acoustic of its own, suggesting an unusual, non-studio recording location. There was some treble peak blasting to deal with and quite a bit of swish, but generally I'm very pleased with what I've been able to recover of this truly superb, if truncated, performance.

The Fauré has clearly benefitted from a further decade or so of microphone development, though the discs were typically crackly HMV 1930s fodder. Each side of this apparently private recording was a first take, which is a shame as the pianist was obviously struggling under the pressure of the recording studio.

Sammons, though, rescues the whole thing with a wonderful performance, and it's a real honour and privilege to be able to finally release this recording, from possibly the only surviving copy of the discs - although these were "proper" pressed 78rpm discs, it is unknown how many copies where made and who may have received a set. We do know that the present set was originally a part of the Sammons family archives, which were sold off following the death of his daughter in the late 1990s.

XR remastering by Andrew Rose at Pristine Audio, December 2010
Cover artwork based on a photograph of Albert Sammons
Total duration: 56:10 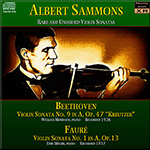