The decision to tackle Flagstad and Furtwängler's legendary première recording of Richard Strauss's Four Last Songs in the year of the composer's 150th birthday was taken following the suggestion of a correspondent who e-mailed me last summer with the idea. That it's taken more than nine months to bring to fruition has much to say for the difficulties involved in trying to do anything to improve the frankly abysmal quality of the original recording, originally captured on acetate discs that have seen far too many heavy needles over the years.

The flaws inherent in the original recordings are myriad: Surface noise is a constant intrusion; Thumps, bumps, clicks and scratches abound; The frequency range is limited, the frequency response deeply unrepresentative; Swish is endless to the point of being almost overwhelming; Distortion rears its head too often. Restoration and remastering technology can help enormously - XR remastering brings out much of the orchestral richness and texture and lifts a veil from Kirsten Flagstad's voice, whilst pitch correction helps with wayward wow and flutter. Much of the swish has been smoothed out, and noise reduction has done just that. The recording remains pretty compromised, as I suspect it always will, but once the ears have adjusted to the shortcomings of the medium there's much to be enjoyed and cherished.

The other three recordings were made in the Musikvereinssaal in Vienna for commercial releases. The first, Tod und Verklärung, was originally destined for 78rpm issue in 1950, and although it would have been taped, is of noticeably lower quality than the later, 1954 recordings. Hiss levels were higher and the upper frequencies less well defined - though of course all three recordings are much, much better from a technical point of view than the Four Last Songs. As with the Songs, the recordings all responded very well to XR remastering, which has once more brought new life and light to the orchestral sound. 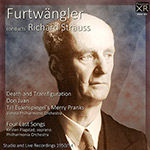 Anyone with a serious interest in Flagstad, Furtwängler, and/or Strauss’s Four Last Songs will find this a necessity

The world premiere of Strauss’s Four Last Songs was given on May 22, 1950, at the Royal Albert Hall in London, and was privately recorded. Versions of that recording (often misattributed as the dress rehearsal) have circulated for many years on a variety of labels, in sound ranging from the atrocious to the very poor. In 2008, Testament came out with a version that sounded much better than its predecessors, but was still difficult to enjoy. Now Andrew Rose has tried has hand at it, applying his XR remastering technique, and the result is the best yet. I do not want to create false hopes here. The original recording is in many ways hopelessly flawed. There is constant surface noise and grit, distortion at climactic moments, and on the earlier reissues the inconsistent pitch from wow and flutter was crazy-making. While Testament’s issue fixed the pitch problems and minimized the others, Pristine goes further. The orchestral colors are more vividly realized here, Flagstad’s voice is clear and brilliant, and one can enjoy the performance in a way that is not even possible on Testament’s version.

So, then, the discussion can center on the performance itself. Surely no singer since this premiere has sung these songs with a richer, warmer, more full-sounding dramatic soprano voice (though Jessye Norman brought similar qualities). Indeed, the trend has been consistently toward lighter, more lyric sopranos. It is important to remember that Strauss wrote these songs specifically with Flagstad in mind, and persuaded her to learn them and sing the premiere (though he died before it took place), and it was Flagstad who insisted upon Furtwängler. In the decades since, we have become accustomed to those lighter voices (Schwarzkopf imprinted herself on many of us), and to a degree of specificity in word-pointing that Flagstad does not deliver. One can find any number of performances with a greater variety of inflection and vocal color, but very few with this degree of tonal warmth and beauty throughout the range. Flagstad seems to be luxuriating in this music, and she and Furtwängler are in synch with each other at every turn of phrase. The orchestra positively glows at the beginning of “Im Abendrot,” and that is more apparent in Pristine’s transfer than it ever has been. The order of the songs at this premiere differs from what has become the established order (remember that Strauss did not necessarily conceive them as a set). Here we have “Beim Schlafengehen”; “September”; “Frühling”; “Im Abendrot.” Even after Andrew Rose’s superlative work, enough flaws remain that this could hardly be recommended as anyone’s standard recording of these songs. It is, however, a valuable and important document of the world premiere by the soprano for whom they were written and one of the great conductors of the era, and it is finally in listenable sound.

Pristine has chosen three EMI studio Strauss recordings to round out the disc, and their XR remastering brings a degree of color and life to these recordings that improve upon the EMI transfers with which I am familiar. There is a 1947 live performance of Death and Transfiguration with Furtwängler and the Hamburg Philharmonic that exceeds this 1950 recording in terms of intensity and raw power (it has been issued by Music & Arts, Nuova Era, Arlecchino, and various other labels), but this has much more satisfying sound quality and is better played. For Don Juan and Till Eulenspiegel there are a number of Furtwängler alternatives that have more life to them. This 1954 Don Juan is a bit earthbound, and even Pristine’s vivid restoration work cannot make it the equal of various alternatives: a 1947 Berlin Philharmonic performance on DG or a 1953 Salzburg Festival reading on Orfeo have a degree of spontaneity lacking here, though the clarity of the recording and beauty of the central section make this worth having. For Till the 1943 Berlin performance on DG (or even better on Eduardo Chibas’s transfer at furtwanglersound.com) is hair-raising, but somehow Furtwängler and the VPO managed to find a degree of panache here that eluded them in Don Juan, even though Till was recorded the next day, and this is almost the equal of that wartime live performance. These performances are clearly the work of an important and great conductor, and one hears his attention to orchestral sonority and balance perhaps more clearly in Pristine’s transfers than ever before.

As is usual, there are very minimal notes with the disc. Pristine says “full programme notes can be found online,” but I cannot locate them, and don’t know whether they include texts for the songs. Anyone with a serious interest in Flagstad, Furtwängler, and/or Strauss’s Four Last Songs will find this a necessity.