Introduction to our Albert Coates series: 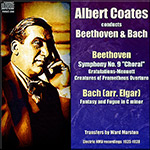 The mighty Choral symphony, rather like Mahler symphonies, offered quite a challenge to the youthful recording studios. And yet even the acoustic horn didn’t shy away from the challenge. In Berlin, in 1923 and on 14 shellac sides, Bruno Seidler-Winkler, recording pioneer, directed the forces of the Neues Symphonie-Orchester in pursuit of his goal. Even earlier, in 1921 - though the task was not completed until 1924 – Frieder Weissmann led the Blüthner-Orchester, Berlin, in the Ninth, though in one of those twists beloved by 78 lovers, duties for the finale were taken over by the German Opera House Orchestra and chorus under a completely different conductor, Eduard Mörike. Even more delightfully, and confusingly, two completely different sets of takes were issued, representing different recordings made over the years by these forces. In between all this, Anglo-Russian volcano Albert Coates nipped into his London studios to set down his own recording with the Symphony Orchestra, a bashfully anonymous band who were probably the LSO.

Three years later he was back, with the same band, but this time the studio recording was electric, working via microphone, not the recording horn. The results remained formidable and dynamic, hugely involving and intensely rousing. His dynamic accelerandi, the speed of a greyhound out of the traps, animate the second movement and reveal graphically his seismic approach. It is never grammatically misplaced however, indeed it generates a similar kind of focused energy as Toscanini was later to do on disc in his cycles – and Coates is by no means slower than the Italian. The slow movement sports a few well disguised disc thumps – it’s vital, fluid and forward-moving, and not unmoving in its way, especially since Coates is capable of vesting the music with a vocalised cantilever that never fails to impress. There’s a bit of a cut in the third movement. The finale is launched with predictable vehemence – an intensity that prepares one for the riches to come. The vocal quartet is fine; Walter Widdop, that sterling Handelian and Heldentenor is at his penetrating best; Elsie Suddaby deploys her crystalline purity to considerable effect. The two lesser known names are those of contralto Nellie Walker, thankfully not plummy, and Stuart Robinson, who is laudable too. The choir is the Philharmonic Chorus, trained by the expert Charles Kennedy Scott. They made a number of recordings together, much valued to this day. In any case Coates was used to directing choirs and one of his most interesting recordings, made the previous year, was of Bax’s Mater Ora Filium with the Leeds Festival Chorus.

There is more, besides. Elgar’s grandiloquently thrilling Bach reworking is meat and drink to a musical hedonist like Coates – though it would be wrong to think him, from this description, as undisciplined. It’s remarkable, in fact, how successful he was in the recording studio, when he had to channel his intense, romantic style in four minute segments. More Beethoven completes the disc, a rare outing for the rather emaciated 1925 Gratulations-Menuett WoO 3 (has anyone else transferred it?) and the Prometheus overture, via a far richer 1927 HMV.

There is a competing Ninth on Historic Recordings 47, but I’ve not had access to it, and it doesn’t contain any fillers. Ward Marston has done a fine job with the Victors for the Ninth, and Coatesians may apply with absolute confidence.