Tchaikovsky Piano Concerto No. 1 in B flat minor

Restorer's notes: There's no doubt in my mind that this is one of the great recordings of all time - from the moment you hear the opening horns, orchestral chords and piano entry you know you're in a different league from most mortal performances, and at no point does the application of genius let up - this whole recording is simply magnificent.

However, all was not well with the recording technology, as has been noted elsewhere by previous transfer engineers:

...the Tchaikovsky was originally issued with two dubbed sides (Sides 6 and 8, the second halves of the second and third movements). The originally-issued version of Side 6, Take 11R, was a particularly inept dubbing begun when the cutting turntable had not yet come up to speed, and contained a good deal of pitch instability. This take was replaced on postwar copies by another which sounds like an undubbed take, although the take number is not visible on the pressings. The final side remained a dubbing on postwar versions, one with a sound quality quite different from the rest of the set... (Mark Obert-Thorn, Naxos, 2002)

It is clear that Mark's transfer for Naxos uses the later issue of side 6. This restoration uses the original take 11R for a variety of reasons, though mainly as that was the copy immediately to hand. I also believe that the take would have been chosen for artistic reasons, and as a restoration engineer, decided to take up the challenge of correcting the speed error and integrating the far noiser 6th side into the entire recording. Likewise the final side has been separately adjusted tonally to try to make a smoother transition from the previous sides, though in this case one also detects a greater reverberation, suggesting different microphone technique, and this cannot be reduced using currect technology.

In addition, this transfer of course benefits from the Pristine Audio XR remastering system. Others flaws in the recording don't help at times: "...the mastering of the original metal parts was faulty for several of the sides, leading to swish, inherent noise and...a general fuzziness and lack of focus..." (M. O-T). At times that fuzziness is all too apparent, though I've managed to tame it considerably, whilst increasing the upper frequency range by several kilohertz and correcting tonal inaccuracies inherent in the original.

My clear judgement is that the beneficial aspects of the XR processing far outweigh its occasional highlighting of weaknesses in the original discs - never has this recording sounded quite as good as this! 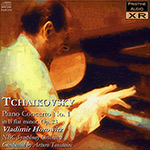