This transfer of Stravinsky's far too rarely-heard Perséphone was suggested to me by John Phillips, who also supplied the source recording, a copy of the original Columbia Masterworks LP in near mint condition. The original recording was exceptionally well made, though one can only curse Columbia for their non-adoption of stereo at this stage in the 1950s! In carrying out the XR remastering of the recording I compared it sonically to a more recent recording of the work by Kent Nagano and the London Symphony Orchestra (as referenced in the review above).

The two shared a very close average frequency response curve, though the latter did highlight a slight thinness in the voices and suggest an adjustment which brings out greater richness in the voice of the tenor, Richard Robinson. This aside, and with a reduction in the tape hiss present on the original LP, this transfer is exceptionally faithful to the original. Unlike the LP, however, there is here no requirement to split the lengthy second section into two halves in order to meet the time limitations of the vinyl long playing record. 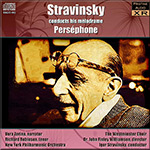 This is a major addition to the heritage of Stravinsky performances

Perséphone, the “balletic retelling of the regeneration mystery” (New Grove), written in Paris in 1933–34, is a weak sister of Oedipus Rex and the Symphony of Psalms. “Narrator” (taken from the original LP) is a misnomer; the speaker is Perséphone herself, taking full part in the action. In the 22-CD set Works of Igor Stravinsky ($31.99 at Amazon—one of the great bargains), the part is labeled “Perséphone (the Goddess).” The tenor role is there called “Eumolpus (The Priest),” who oversees the drama, acting more as narrator than does the Goddess. Confused yet? The ancient myth, involving trips to Hades as well as the regeneration of spring on earth, crams too much into one tale, and André Gide’s libretto is of little help. The uneven and unconvincing story is responsible for the distinct lack of attention this work has received. Which is too bad, because the score contains much of interest, if not quite the tension and power of its siblings.

This monaural recording was made by Columbia Records on January 14, 1957, months before the company switched to stereo (it had made one stereo recording in New York, Leonard Bernstein’s Messiah, in December 1956). Andrew Rose’s transfer was made from a “near mint” copy of the Columbia LP, ML-5196, and it is a notable improvement over that vinyl disc. Not only has noise been eliminated and clarity improved, but the tenor’s voice has gained color and an appropriate ring. Stravinsky remade Perséphone in stereo in Hollywood a decade later, but that performance is more generalized, with looser orchestral playing; nor is the overly sweet stereo sound appropriate for this work. So this is a major addition to the heritage of Stravinsky performances. It is sung and spoken in the original French, but neither of the Stravinsky-led CDs has a libretto; given the complex, confusing nature of the tale, this makes the original LP a keeper for its six-page libretto, with French and English printed side-by-side. The Internet offers at least one libretto to download; I have not seen it and so cannot recommend it.