DELIUS Appalachia
DELIUS In a Summer Garden
DELIUS Over the Hills and Far Away
DELIUS On Hearing the First Cuckoo in Spring
DELIUS Summer Night on the River
Studio recordings, 1950-1956
Total duration: 78:44

I had prepared Appalachia for release some four years ago only to find it just too long to fit with the other works planned for that release. Here I've returned to it with a fresh transfer and remastering, and coupled it with two other mono Delius recordings Sir Thomas made in the early 1950s In A Summer Garden and Over the Hills and Far Away. All of these have seen great tonal improvements in these XR remasters.

Beecham returned to a number of earlier recordings and remade them with the advent of stereo - the first two of these three mono recordings were not remade. Appalachia itself was a remake of his 1938 78rpm recording.

The final two recordings, from Two Pieces for Small Orchestra see us entering the stereo era - they were recorded together in October 1956. The results of this recording session were remarkably hissy, and a great deal of effort has gone into preserving the full orchestral tonal range whilst trying to minimise this hiss - something at least one other recent major-label reissue has tackled with such a heavy-handed approach to digital noise reduction that has had a quite destructive effect on the musical content. Hopefully this release puts the record straight, so to speak! 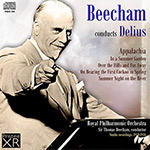 Probably no other composer’s reputation has rested as exclusively on the work of a single interpreter as that of Frederick Delius with Thomas Beecham, at least for the 50-plus years that Beecham advocated for Delius’s work. Here Pristine’s Andrew Rose offers his remasterings of five Beecham recordings from the 1950s, all remakes of prewar 78s. The first three are from 1950–52 mono English Columbia originals; On Hearing the First Cuckoo in Spring and Summer Night on the River are stereo HMV recordings from 1956–57. Rose errs in ascribing both items to an October 1956 session; the latter work was actually recorded five months later.

I am probably in the minority in thinking that Appalachia is one piece in which John Barbirolli surpassed Beecham’s achievement. Barbirolli adds a minute and a half to Beecham’s duration, and his expansiveness suits this longest of Delius’s orchestral scores. (Atypically, Beecham’s 1938 version is actually longer than this 1952 recording.) Barbirolli’s stereo sound helps.

This version of In a Summer Garden is a relative rarity, at least on this side of the Atlantic: Of all of Beecham’s early 1950s English Columbia recordings of Delius, it is the lone item that never appeared on an American Columbia LP. They were all reissued in the 1990s on five UK Sony CDs, but those are all out of print. Beecham remade Over the Hills and Far Away in stereo in 1957.

Rose’s transfers are particularly successful in the three mono items, an improvement on the somewhat disappointing sound of the Sony CDs. In the stereo recordings the woodwinds are lifelike, but there is a bit of an edge to the tone of the loudest violin passages. Of course, these recordings were first available here on a wretched Seraphim LP, and if you still have that you’ll be pleasantly surprised by the fullness of the sound. When CDs were introduced one of the first things I set about doing was retiring all of my U.S. Angel and Seraphim LPs; even the earliest CDs—including a treasurable two-disc set of all of Beecham’s stereo Delius recordings—were a vast improvement. I compared the EMI CD with Rose’s in the two stereo items, and the frequency response of the EMI is smoother, without the harsh violins.

My misgivings about his Appalachia notwithstanding, Beecham remains uniquely authoritative in Delius, and Rose’s ministrations freshen up the mono items nicely. Recommended.

Richard A. Kaplan
This article originally appeared in Issue 39:4 (Mar/Apr 2016) of Fanfare Magazine.