In their 1956 book, The Record Guide, Edward Sackville-West and Desmond Shawe-Taylor, not a pair to mince their words, sit on the fence or hold back from expressing an opinion, wrote of this recording:

"It is scarcely possible to imagine a more delightful pair of records than the complete Decca Fledermaus. There is no spoken dialogue, but a virtually uncut performance recorded with good balance and a wonderful bloom on the vocal and orchestral tone. No better conductor could have been found for this delectable score than Clemens Kraus; he handles the detail with as much care as though it were Mozart...an almost incredible delicacy... Perhaps the greatest musical pleasure comes from Julius Patzakand Hilde Gueden [right, as Rosalinde]: their duet in the second act [Dieser Andstand]...is particularly ravishing. Apart from its musical and technical excellence, the recording has captured to a remarkable degree the illusion of a stage performance... This is one of the best opera sets yet published in England."

Pristine Audio is delighted to bring you an incredible brand new transcription and restoration of these discs from the golden ears of Peter Harrison of disk2disc. When I put it to Peter that Sackville-West and Shawe-Taylor seemed to like it quite a lot, he replied: "So do I - and I have five other recordings of it! The only one that comes close is a DVD with Carlos Kleiber."

This really is a masterful recording, lovingly restored from near-mint original vinyl, and sounding gorgeous - in this his first commercial remastering for Pristine Audio, Peter Harrison truly excelled!

NB. In January 2010 we prepared an Ambient Stereo version of this recording, which was among Pristine's original set of twelve releases for our launch in February 2005. We also took the opportunity at this time to upgrade the MP3 files to a maximum possible 320kbps resolution and to make additions and minor modifications to the cover notes. 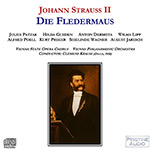