The complete Barber as conducted by Koussevitzky

These three works comprise the complete recorded repertoire of Samuel Barber as conducted by Serge Koussevitzky. (There was also an earlier broadcast performance of the Commando March, but no commercial recordings of any of the works.) Koussevitzky was famous for championing contemporary American composers during his tenure in Boston, and he brought his customary passion and commitment to the scores we hear on this program.

The Violin Concerto is heard in the first performance of the revised version Barber prepared in November, 1948. The soloist, American violinist Ruth Posselt, was married to the BSO’s concertmaster and assistant conductor, Richard Burgin, and holds the record for most appearances by a soloist with the orchestra. The concert from which this recording emanates was not broadcast, but rather was surreptitiously recorded using a microphone concealed in a ventilation grate above the stage, as were several other concerts during the 1948-49 season. The sound, relayed by telephone line and taken down on acetate discs at a local Boston recording studio, is nonetheless surprisingly well-balanced and immediate. (A couple bars in the finale that were missing on the original recording due to a skipped groove have been patched in from another performance.)

The Commando March and Second Symphony date from Barber’s service in the U. S. Army Air Force during the Second World War. The broadcast of the symphony’s world première features the original version of the work, which Barber revised in 1947 in part to jettison programmatic elements. One of the casualties of this was the removal of the electronic tone generator used in the second movement (starting at 5:34 in Track 7) to suggest the radio beam used for guiding flyers. Although Barber made a recording of the revised version in 1950, he withdrew the work from performance in 1964 and soon after destroyed all known copies of the score, keeping only the revised second movement which he renamed Night Flight. A copy of the orchestral parts of the complete symphony turned up in England after Barber’s death and has been used as the basis for further performances.

Producer and Audio Restoration Engineer: Mark Obert-Thorn
Recordings from the collection of Langdon F. Lombard
Cover artwork based on a photograph of Samuel Barber & Serge Koussevitzky 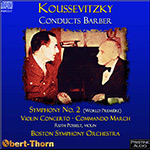