Zimbalist - two concertos from one of the all-time greats

"The sweeping and richly characterized performance carries the day. A recommendation, strongly and absolutely" - Fanfare 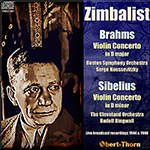