I was happy to have excellent pressings for all three of these works - two from a near-mint American Columbia Masterworks LP (Arnell and Berners) and the third from a similarly wekk-preserved Philips LP (Delius). Unsure of the overall timings I had also prepared Beecham's 1952 Delius Appalachia recording, but this proved to be a minute or so too long for the present release. It was interesting to discover that both London recordings were of significantly higher quality than the US recording, but that's only really to say that the Berners was well-recorded and the Delius and Arnell even better.

Given such promising material I was able to try out a new addition to the XR repertoire of remastering techniques - a means of compensating for the lack of very deep, resonant bass in recordings of this era, such as one might feel shaking the floor slightly in a modern recording of similar material. This proved more successful than I'd hoped and the results can be heard especially well in the Arnell which, apart from its mono centre, could surely pass for something several decades more recent than 1950!

All in all it was an astonishing result that exceeded all my expectations.

XR remastering by Andrew Rose at Pristine Audio, October 2011
Cover artwork based on a photograph of Sir Thomas Beecham 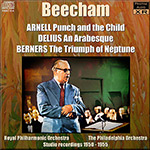 There seems to a revival of interest at present in Lord Berners so that the appearance of this account of his chef d'oeuvre, the ballet suite, The Triumph of Neptune is as timely as it is welcome. I should perhaps stress that this is not the familiar 78 rpm version that Beecham made with the LPO (Columbia LX697-8, 2/38) but one new to this country, recorded with the Philadelphia Orchestra and that it includes two movements omitted from the English set, "Cloudland" and "The Frozen Forest". Commissioned by Diaghilev for his second visit to London made at Beecham's invitation in 1926, The Triumph of Neptune had the benefit of a libretto by Sacheverall Sitwell and choreography by Balanchine; Danilova, Lifar and Petrova danced the leading roles. Berners has been compared with Satie though with scant justification: their eccentricity is perhaps their only point of contact. In general Berners cannot be said to possess a strongly defined personality: he was a pasticheur of great accomplishment and an artist of versatile talent (he was also a painter and novelist). He certainly succeeded in this delightful score in capturing the fragile period flavour of the twenties; the musical invention is sustained and his wit and cleverness are telling. It would perhaps be a little too much to expect the Philadelphia Orchestra to fully penetrate the highly idiosyncratic world the score evokes and those who know the LPO version will find accents heavier and rhythms less fleet of foot. Robert Grooters, who briefly appears as the singer practising The Last Rose of Summer in "The Sailor's Return", is more heavy handed than Robert Alva in the pre-war 78 rpm version.

Richard Arnell's music is neglected these days though his Fifth Symphony was recently broadcast. What little music of his that I have heard is often distinctive in utterance. In some respects he seems to me not unlike Rawsthorne though there is little of the darker, more searching quality one finds in the latter. Punch and the Child dates from 1948 and given its balletic origins is episodic in character. The Record Guide spoke of it as "agreeable music but hardly strong enough to hold the interest on repeated hearing" without the stage action. Hubert Foss in these pages wrote: "Idea after picturesque idea succeed each other in bewildering succession. First impressions were: restlessness and excitability, a marked Prokofiev flavour, a plethora of undeveloped notions, a diatonic basis with a generous sprinkling of wrong notes to keep it up to date". Some of this undoubtedly holds good today though speaking personally, I have an affection for this score short-breathed though its invention may be. Some of its ideas are highly memorable and fresh, there are moments of poetry and the score is full of vitality. Yet ideas are never really sustained long enough to satisfy the listener. I have periodically returned to the 78 rpm originals over the years but shall do so no more since this new transfer is of quite outstanding quality: indeed one would scarcely suspect its origins so well focused is its sound. Everything is lively, fresh, and truthful in timbre; it is, I would have thought, exceptionally vivid for its period. (A friend guessed its date at 1962 or 63.) It derives from tape rather than 78 rpm masters, I am sure, since there is no trace of surface noise. The recording of the Berners is less distinguished but this does not inhibit a warm recommendation for this most welcome and desirable reissue.

Excellent performances, aided by superlative transfers, and well worth your time

These are all classic Beecham: the Arnell from 1950, Delius from 1955, and Berners from 1952. The Columbia Masterworks release of the Arnell and Berners was the first I ever heard of either work, and somewhere in our basement, that LP remains. Since then, I’ve acquired other versions of The Triumph of Neptune (Marco Polo 8.223711) and Punch and the Child (Dutton 7227), but good as each is, neither matches up to the magic that was Beecham on the podium when at his best. Consider the Arnell: Martin Yates I’ve found a variable conductor, sometimes routine, sometimes very good indeed—and at the top of his form, a colorist who understands the sound of an orchestra and its many textures like few others. So he does in Punch and the Child; but Beecham does this, too, with a better attention to momentum, as well as an ability to cut loose in expressive attacks (in the Overture, for instance) that Yates is not willing to pursue in his recording. Consequently, Yates brings out all the color and harmonic richness in the ballet, while Beecham is willing to sacrifice some of each at times to better illustrate the work’s shifting character, and preserve a sense of the dance.

The Delius suffers from a particularly hard and monotonous baritone, Einar Norby, who nonetheless demonstrates fine phrasing. So does Beecham, whose gift for knowing just how to present this music at its most confidently glowing was a touchstone throughout his lengthy career. It wouldn’t do to miss mention of Robert Grooters, whose brief interjections of The Last Rose of Summer in “The Sailor’s Return” (The Triumph of Neptune) are well sung, and marvelously over the top—much as you’d expect from a drunken, maudlin sailor at the turn of the 20th century.

The sound is wonderfully rich and full-bodied: brighter in the higher strings for both works with the Royal Philharmonic, evincing that shining bite I’ve come to associate with the orchestra at that time. The Philadelphia’s rich strings (“Cloudland”) and characterful wind soloists are evident throughout the Berners; frankly all three selections could pass for good recordings of a decade or more later, were it not for their mono signal. Which isn’t a call for electronic stereo—a curse that seems to have lifted from the land—but simply a fact of life.

Finally, I should mention that the liner notes reprint a 1974 Gramophone review of the Arnell and Berners material. That critic quotes from an earlier one who stated of the Arnell in part that it had “a plethora of undeveloped notions,” to which the Gramophone reviewer responds with glorious condescension, “speaking personally, I have an affection for this score, short-breathed though its invention may be.” Neither, I suspect, took notice of the small number of interrelated motifs in Punch and the Child, or that these are ingeniously transformed in each successive dance variation.

In short, these are excellent performances, aided by superlative transfers, and well worth your time.