Renata Tebaldi's debut season at London's Covent Garden began on 28 June 1955 with her singing the title role in Puccini's Tosca. Perhaps fearing opening night nerves or mistakes, the BBC opted for the performance two nights later for their live broadcast from the Royal Opera House. Despite  Robert Levine noted in a Classics Today review that noted the "blaring but acceptable" AM-quality sound of a previous issue, he gushed: "Tebaldi’s voice is remarkably fresh and secure, with all five high Cs in place and offering no problems; the registers are perfectly knit and the sound grand, beautiful, and womanly ... If you love Tebaldi you’ll adore her here in this gloriously sung and very committed reading ... Tito Gobbi of course is sui generis. From his opening, snarling statement in church, through his lascivious, sneering, “Ebbene” and disgusting “Tosca, finalmente mia” and even beyond, he terrifies."

We are fortunate that an anonymous music lover commissioned a studio with disc-cutting equipment and a suitable VHF receiver that night to record the live transmission onto a set of 33rpm acetate disc sides, as this remarkable new find (via a 1/4" tape dub) has proved to be immeasurably superior in sound quality to the previously reviewed recording, and proved to be a superb source for this new XR remastered release - especially as FM broadcasting had begun less than two months previously in the UK. It's not perfect: a handful of minor patches were necessary where damage or small side-change gaps left "holes" in the material; sound quality tends to drop off towards the end of disc sides too.

But these minor issues pale into insignificance by comparison to the radical improvement in sound quality to be heard here, with a full, realistic, clear and vibrant sound almost throughout. Magnificent! 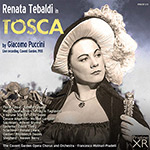 Pristine has brought out a wide range of color from the orchestra and the voices, and the balance and perspective captured by the BBC engineers is superbly natural

This is a release of immense importance. Although this performance has circulated on a number of labels, the sound quality here is completely different (and significantly better). I know the performance on the Bongiovanni, ICA Classics, and Walhall labels, and it has also been on Legato and Great Opera Performances (GOP). All of those derived from an AM off-the-air broadcast. The BBC had, however, begun broadcasting in FM, and an anonymous music lover hired a recording studio with disc-cutting equipment and a VHF receiver to record the FM transmission, and that is the source of Pristine’s release. It is the first time this source has been used, and a veil has been lifted from the performance. There were a few lapses from side changes and/or damage, and Pristine’s Andrew Rose has filled them from the other source, with as little difference as he could manage.

Tebaldi’s debut with the company was two nights earlier in Tosca with the same cast; BBC chose to broadcast the second performance. It finds Tebaldi in glorious voice. Even her top notes, which could be parlous even in her prime, are mostly firm and solidly pitched. Her luscious tone is evident throughout—a sound unlike that of any other soprano in my experience of over a half century of listening to opera.

In addition to the timbre itself, Tebaldi has an innate feel for how this music should go, for the ebb and flow of every phrase. She is also a mistress of dynamic range. Yes, she can (and does) float glorious pianissimos and she can open up with a full throated fortissimo that remains rich in texture. But where she differs from so many is in her use of all the dynamics in between the two extremes. This allows her to characterize the music with dynamic variety, rather than Callas-like specificity of inflection. Of course Callas’s Tosca remains an extraordinary musical-dramatic experience, but one should not fall into the trap of accepting received wisdom that Tebaldi was not an effective actress. Tebaldi sings with genuine dramatic involvement and with a sincerity that always moves an audience. In my experience, no soprano (not even Callas) could break your heart the way Tebaldi does at “Dio mi perdona. Egli vede ch’io piango” (God will forgive me. He’ll see that I am crying). This is Tosca’s response to Scarpia’s hypocritical “In chiesa!”—“In church!”—after Tosca’s outburst in the first act. First, Gobbi underplays the “In chiesa” line perfectly. Then Tebaldi begins her response with a deeply anguished pianissimo, and a crescendo starting on “vede” that explodes with pain on “piango.” Throughout the scene with Scarpia in the second act the two singers genuinely interact with the kind of white heat that can occur on special nights in the opera house. And then, Tebaldi melts you with “Vissi d’arte,” despite a high B♭ that is slightly under pitch. The soft singing that follows it more than compensates.

By now we are familiar with Gobbi’s Scarpia, though it has a degree of spontaneous intensity emanating from a staged performance that is a degree beyond the famed EMI studio recording. He is in spectacular voice throughout. I have heard opera lovers complain that his Scarpia lacks subtlety, that it is too overtly nasty and sadistic. I find that consistent with the character that Puccini has created, and for me the force of the performance sweeps all doubt away.

Tagliavini was not ideally suited for the role of Cavaradossi. His light tenor sounds a bit pushed at times, though he does manage to sing with genuine force and power at “Vittoria, vittoria,” and at the climax of his duets with Tosca. The sweet sound is truly beautiful and distinctive for the lyrical sections of the role, and the worst part of the dramatic parts is not that they sound bad, but that we are aware of the damage he is inflicting on his instrument, which would shorten his career. Nonetheless, we can certainly understand his popularity from the shaping and singing he displays in “È lucevan le stelle” and “O dolci mani,” and his ability to match Tebaldi’s caressing tones in their two duets.

Molinari-Pradelli was a routinier in the best and worst sense of that word. He knows how Puccini goes, and he shapes the music with understanding and affection. He also lets the singers breathe and phrase comfortably. What he doesn’t bring is any special insight or interpretive viewpoint to the score, such as we get from Sabata, Karajan, Mitropoulos, or Levine. The remainder of the cast is solid (Michael Langdon’s Angelotti is considerably more than that).

I suppose one key question might be, “If I own one of Tebaldi’s studio recordings, should I invest in this one?” I would say the answer is a strong yes. Tebaldi takes interpretive risks on stage that she didn’t quite manage in the studio. The best comparison to this performance is the 1956 Met broadcast led by Mitropoulos, with Tucker and Warren. The sound of that as heard on Myto is close in quality to here, though still somewhat harsher than what Pristine has accomplished with this performance (the Mitropoulos was also issued on LP by the Met itself). Despite Warren’s remarkably resonant baritone, his Scarpia is much more generalized and less specific in inflections than Gobbi. I also find that Gobbi inspires Tebaldi to greater heights of intensity in the second act. Also, the Met performance is very hard to find now, and sells on Amazon for over $40! Pristine has brought out a wide range of color from the orchestra and the voices, and the balance and perspective captured by the BBC engineers is superbly natural. As usual with Pristine, there are minimal notes and no libretto. But none of that matters; this is an essential recording for opera lovers.