Our remastering of Karajan's 1960 Die Fledermaus (PACO 068) was drawn from the a 1962 SXL issue which excluded the Ballet and Gala sequence of the original LPs. Immediately following the release I was asked by a number of correspondents to restore both the Gala (which also appears on the current Decca CD reissue) and the Ballet (which does not). For my own personal tastes the present, separate release, is a more satisfactory solution both to the interruption otherwise of the flow Die Fledermaus, and to the difficulties of fitting the entire thing onto two CDs. I have applied exactly the same XR remastering treatments to the Ballet and Gala as were applied to the previous issue and faded out the present recording at the point at which the two begin to match once more.

This splitting of the works not only allows for the Ballet to be issued, but also for us to explore Herbert von Karajan's four Johann Strauss recordings of the early 1940s, made with the Berlin Philharmonic Orchestra for 78rpm release by Deutsche Grammophon. In each case the recordings have been completely transformed from dull, wartime issue sound into music which sparkles and shines in a quite remarkable and unexpected manner. Despite the occasional flaw one expects from recordings of this vintage, the detail and range of the recordings is astonishing when heard in these 32-bit XR-remastered reincarnations. 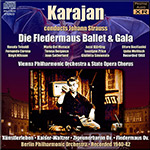 FURTHER INFORMATION ON THE GALA RECORDINGS:

There's absolutely no hard information given with the LP booklet as to exactly who's playing on the gala sequence. The nearest we get is some passages in John Culshaw's note:

"In producing this Gala Performance of Johann Strauss's "Fledermaus" for records we have tried to surround the self-contained vivacity of the music with dialogue and effects "paced" according to the atmosphere of each act: the intimate, drawing-room comedy of the first, the bustle and gaiety of Orlofsky's party in the second, and four-in-the-morning hangover which persists for the first part of the third. The Gala sequence itself, in which many of the world's greatest opera singers appear in a series of party turns, is based on a tradition preserved in several opera houses (notably the Metropolitan, New York) for the special New Year's Eve performance. It fits neatly into the second act and demands no modification in Strauss's original score.

Making the recording of the second act was something of a party itself. In addition to the principals and the Vienna Philharmonic, hundreds of "extras" and several small bands took part so that one should be able to imagine the guests moving from one part of the palace to another: from the gambling room to the garden, and from Orlofsky's reception hall to the dance floor. For example, immediately after those who are surrounding Adele have applauded her aria another burst of applause is heard some distance away, signifying the arrival of Frank disguised as the Chevalier Chargrin, while the band in that part of the building greets him with a suitable anthem. A different sort of innovation occurs in the Act 3 melodrama, immediately after Frosch's opening monologue. Since records cannot convey the comic mime for which this passage was written, we have devised a sort of aural equivalent — the incident of Frosch's disastrous encounter with an ancient Viennese coffee machine.

This, then, is a Gala Fledermaus produced and recorded in Johann Strauss's own city, Vienna — indeed, in a hall in which he himself frequently appeared. Perhaps this contributed more than anything else to the atmosphere we were trying to re-create: the "Schwung", the comedy and the elegance of this incomparable operetta."

Philip Stuart's Decca Discography states the following were recorded as a part of the main sessions:

Five more “guests” were recorded in London and Rome in Jun-Jly 60.


I tracked down first the Rome recordings:


Then the London sessions:

As for the early Strauss recordings, they show a Karajan much more in the true Viennese waltz tradition. Considering that this is Johann Strauss and not Richard, I say go for the schmaltz!

This is Andrew Rose’s reissue of the gala sequence from Karajan’s 1960 recording of Die Fledermaus, along with four rare early 1940s recordings of Strauss pieces with the Berlin Philharmonic. In his notes, Rose explains the splitting up of the gala from the main recording of Fledermaus: It seems that the LP copy he transcribed to CD didn’t include either.

I never thought this particularly long gala sequence, with its inclusion of Broadway and pop tunes of the time, was really appropriate within Fledermaus, despite what one considers “tradition.” Moreover, I felt that Renata Tebaldi sounded both dull in interpretation and vocally uncomfortable, and as someone who spent the better part of a decade (1971–81) collecting everything that Jussi Björling ever recorded, I have to say—very subjectively—that this performance of Dein ist mein ganzes Herz is, for me, the worst piece of singing by him issued commercially. The voice sounds strained and labored throughout, with even a touch of wobble—the only Björling recording to have a wobble. Of course, there were mitigating circumstances. He had suffered a heart attack in March 1960, just before a performance of La Bohème at Covent Garden. The reason he refused to cancel was that Queen Elizabeth was present, and Björling had been raised to believe that you never canceled for royalty. He had also just finished recording the Verdi Requiem at the Sofiensaal with Fritz Reiner, and in fact was currently rehearsing Un ballo in maschera for yet another recording, this time with Georg Solti. Thus he was overworked at a time when what he desperately needed was rest. I’m sure that John Culshaw pressed him into service for this gala just because he was handy and under contract, but it was a bad idea to issue his contribution. One could also say the same of Ljuba Welitsch’s Wien, Wien nur du allein, where the singer’s poor vocal estate, like Björling’s, is not at all helped by Karajan’s ridiculously slow tempos. Good grief! Even Richard Tauber would fall apart trying to sing the piece at this tempo!

The other subpar contribution here is not the result of being in poor voice but of just being who she was, and that is Joan Sutherland’s unintelligible, portamento-ridden, droopy version of Il bacio. (I almost fell on the floor laughing as she uncorked a downward portamento that I thought would actually fall through the floor.) Otherwise, there are some really fun moments here, particularly Fernando Corena’s singing of the French pop tune Domino, an unbuttoned Nilsson performance of I Could Have Danced All Night (complete with a ringing high C at the end), Berganza’s ear-ravishing performance of the little Lavilla Lullaby, and those two well-known vaudevillians, Simionato and Bastianini, having great fun with Anything You Can Do. Leontyne Price’s version of Summertime (this might be her earliest recording of it) is fresh-toned and glorious.

As for the early Strauss recordings, they show a Karajan much more in the true Viennese waltz tradition. The music has plenty of gemüchlichkeit, even with throbbing string vibrato in the performance of Artist’s Life that I’m sure the Karajan of the 1950s would have denied ever having done. The same may be said of the other pieces from this era. This is certainly not the way we’d hear this music performed today, and to a certain extent that’s good, but considering that this is Johann Strauss and not Richard, I say go for the schmaltz!

Performance-wise, then, it’s a mixed bag. Sonically, it’s a treat. Rose has managed to slightly reduce the frustrating tunnel sound that Decca-London had recently begun indulging in (and which would last a decade), which makes the orchestra and voices sound rather clearer. Your decision to acquire it will, of course, depend on your nostalgia for this particular recording or your curiosity in hearing it if you haven’t already.

This article originally appeared in Issue 35:6 (July/Aug 2012) of Fanfare Magazine.