The only recording of Cantelli conducting Mozart's Requiem

To the best of my knowledge, this recording has only surfaced once before - on a CD from AS Disc released in 1989 and long since disappeared. This recording, marred by heavy disc surface noise, electrical hum, harsh sound and often unintelligible words, appeared to zip along at a healthy pace. This was caused by the entire recording being pitched a semitone high through the first half of the piece, and a tone high throughout the second half. The correction of this pitch serves to add some three minutes and forty seconds to the overall duration of the performance!

I have endeavoured to do what I can with the sound. It would appear that the original recordings was taken from an AM broadcast - certainly the limited frequency range would imply this. The restoration has been a battle to create as much intelligibility and clarity as possible, set against high noise levels, and to produce a finished recording that can not only be listened to but also enjoyed. I believe that this restoration finally achieves precisely that for what is a unique historic document. 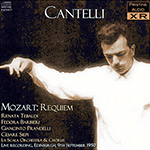 The Composition of the Mozart Requiem

When the Countess Walsegg-Stuppach died on 14 February 1791 her enthusiastic music-loving husband decided to commission Mozart to compose a Requiem in her memory. He wanted the commission to remain anonymous (he was in the habit of commissioning works from reputable composers and then passing the works off as his own). Thus a minion was sent to see Mozart and to persuade the composer to accept the commission for which 50 ducats was paid immediately as half of the honorarium. In Mozart’s usual financially impecunious situation it is unlikely that any pressure was necessary. This meeting with the mysterious “grey visitor” probably took place in the summer of 1791.

The previous May Mozart had taken an unpaid position as Deputy Kapellmeister at the St Stephen’s Church and he probably saw the commission as a way of composing a large-scale religious work which would impress his employer. However, life was hectic for Mozart for the last six months of his life. He had hurriedly completed La clemenza di Tito in a mere 18 days, written the Kleinen Freimaurer-Kantate for his Masonic brethren and completed Die Zauberflöte on 28 September, conducting the première two days later. In the light of this activity it is understandable that when his wife Constanze returned in the middle of October from taking the waters at Baden she was so concerned at the deterioration in Mozart’s health that she took the score of the Requiem away from him: by then he had only completed the Introit and Kyrie. In November Mozart was taken ill. He died on 5 December.

Constanze’s immediate problem was to get someone to complete the Requiem: Franz, Count Walsegg-Stuppach (unknown, of course) had paid the honorarium and was entitled to receive the finished composition and no doubt a further 50 ducats would have been welcome. After some unsuccessful attempts to get the work completed she had to use the services of 25 year-old Franz Xaver Süssmayr, who had been a pupil of Mozart’s, to undertake the completion. There was skulduggery afoot. Obviously, with two completed sections in Mozart’s own hand anything prepared by Süssmayr would be detected at once as a fake, so everything had to be in Süssmayr’s hand. That was done and no doubt Constanze received the 50 ducats due.

Süssmayr has come in for much criticism over the years but a little charity would not be misplaced. The young man was probably learning his trade but he was neither a Mozart nor another genius. He had to complete the instrumentation for the Sequenza and Offertorium and actually compose the music for the Sanctus, Benedictus and Agnus Dei. What if he had not carried out this task? It is perfectly feasible that Mozart’s own work would have been lost or destroyed: who would want to keep a torso of a couple of sections of a Requiem? Scholars will keep trying to get closer to what Mozart wanted but the Süssmayr is, after over 200 years, still the version concertgoers are most likely to hear.

Guido Cantelli, unlike his mentor Arturo Toscanini, was an admirable Mozartean. When he returned to conducting opera in January 1956, after a gap of eleven years, he produced and directed Così fan tutte at the newly opened Piccola Scala in Milan to such enthusiastic acclaim that additional performances had to be arranged. His commercial recording of the Symphony No.29 with the Philharmonia Orchestra was one of only six that Cantelli made in stereo: but it is unique as being the only occasion when he recorded a work with this orchestra which he had not previously included in concert with these musicians. It can stand comparison with any more modern recording and his other commercial recording of Eine musikalischer Spaß (also with the Philharmonia Orchestra and also in stereo) has the unique experience of hearing probably the finest horn player ever – Dennis Brain – playing ‘out of tune’. Cantelli’s broadcast performances of some piano concertos – K466 with Serkin and K467 with Gieseking, both with the Philharmonic-Symphony Orchestra of New York – are also worth seeking out.

Cantelli’s international career spanned a mere eight years (1949 – 1956) before his tragic death in an air crash. It may come as a surprise to some that he only performed the Requiem on four occasions but an analysis of his brief career reveals that that there were another 105 works which he conducteded only four times or less. The Requiem performances were all with the Orchestra e Coro della Scala and all in 1950: there were two performances in the Teatro alla Scala on 19 and 20 June and one at the Edinburgh Festival given on Friday, 8 September (preserved on this CD) – the soloists on those three occasions were Renata Tebaldi, Fedora Barbieri (although one source indicates that it was Maria Radev who sang the alto part in Milan), Giacinto Prandelli and Cesare Siepi: but for the final performance in the Royal Opera House, Covent Garden on 22 September, Suzanne Danco replaced Renata Tebaldi.

The Recorded Performance of Mozart’s Requiem
given in the Usher Hall, Edinburgh on 8 September 1950

The “Mozart” Requiem is a hybrid: in the score of Neue Ausgabe sämtlichr Werke (published 1967) each movement indicates whether is was solely by Mozart, by a combination of Mozart and Süssmayr or just by Süssmayr and this is indicated in the table below as M, MS os S. Whatever the facts surrounding this composition, Cantelli conducts the completion by Süssmayr (later editions have only appeared since Cantelli’s death).

What of Cantelli’s interpretation? Prior to this performance the Orchestra e Coro della Scala had given a performance of a very different Messa da Requiem, Verdi’s, on the previous Monday under the most senior conductor on the tour, Victor de Sabata. The Verdi sweeps an audience off its feet and – on a personal note – that is exactly what happened when I heard the Messa da Requiem for the first time. Such was the impact that when I came out of the Royal Albert Hall (which I had visited dozens of times), I took a wrong turning and missed the last coach home 40 miles away (incidentally, that performance was conducted by Victor da Sabata and my recollection of his somewhat demonic appearance on the rostrum was perfectly described by one of the London Philharmonic Orchestra’s musicians as ‘a cross between Julius Cæsar and Satan’.).

The more restrained Mozart Requiem is a very different matter. When de Sabata made his commercial recording at least one critic considered the performance to be ‘Verdian’ no doubt in an attempt to describe the recording as too theatrical. Note, for example that four of the movements have no tempo indication (presumably the beginning of Lux aeterna would be Adagio since Süssmayr used Mozart’s opening of the Requiem) which is an invitation to an exaggerated response for some conductors. While Cantelli usually observes the tempi indications he is very slow for the opening Andante in the Hostias but that ensures that there is a clear difference to be heard when the Andante con moto follows. Another change from the printed tempo indications is in the Sanctus which is not an Adagio. As mentioned earlier, the Mozart is certainly more restrained than the Verdi but the chorus sings with a fervour which brings out more of the drama than is usually heard and that is no doubt due to the fact that Cantelli keeps things moving (in the main); perhaps that fervour is a little too close to theatrical drama but at least the Chorus sounds enthusiastic and involved. A major difference between the Mozart and the Verdi is that there are no set pieces for the individual soloists and they participate as a sort of ‘mini-chorus’. Cantelli’s soloists are Renata Tebaldi (who had already sung with Toscanini as a 24 year-old in a concert in the newly re-opened Teatro alla Scala during 1946), Fedora Barbieri, Giacinto Prandelli and Cesare Siepi who were well-established in the operatic field – indeed, Giacinto Prandelli had first sung under Cantelli’s direction in May 1944. The voices need to blend and Cantelli’s long experience of conducting choral forces from his student days, allied to a very sure stick technique, ensures that soloists and chorus knew their roles perfectly. While the performance is not particularly reverent or devout at least it avoids any taint of sentimentality which, for this listener at least, is to Cantelli’s credit.