Pay a visit today to Amazon.com and conduct a search for Vivaldi's Four Seasons and you'll come up with an astounding 658 CDs to choose from. Undoubtedly one of the most recorded works of all time, you may wonder why on earth we need another version!

Well go back in time to the early 1950's, when this was recorded, and you'd be in a different world as far as Vivaldi was concerned. As a composer he had been almost completely forgotten. The HMV catalogue for 1952-3 lists a single concerto recording (arranged by Bach); 10 years earlier and there's a concerto and a sonata available on Columbia, and at HMV that same Bach arrangement (listed under Bach).

In 1942 a rather heavily edited (read "modified") version of the Four Seasons was recorded for the first time by Bernardino Molinari, and a second, rather more accurate version emerged in the USA in 1948. Yet the work was still relatively unknown, and by the time this Decca recording was made in 1951 there were no others available in the UK catalogue. It was a further four years before anyone looked at it again the the UK, but by then the momentum was building and the Four Seasons phemonemon had begun. By 1957 you could choose from 6 recordings, by 1963 there were 11.

And yet this 1951 recording was still regarded by many as the best of the early interpretations. The sound quality itself is superb - and perhaps now in this new restoration by Peter Harrison at disc2disk for Pristine Audio Direct is better than ever - whilst the 1956 Record Guide gushes "Reinhold Barchet plays The Four Seasons with imperturbable excellence, and the recording is beautifully balanced and clean" and gives it their top double-starred rating. 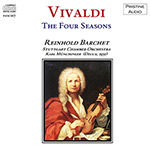