"they all live happily. So shall we, whilst we have these ripe memories of Stravinsky at his best" - The Gramophone

The sources for the present transfers were German Polydors for the Liszt and Stravinsky works and laminated American Brunswicks for Scheherazade. The violin soloist in the last work is not identified on the original labels but is probably the Danish-born Henry Holst, who was the BPO’s concertmaster from 1923 to 1931 before he emigrated to the UK, where later he became the first violinist in the Philharmonia Quartet.

Special thanks to Richard Kaplan for providing source material 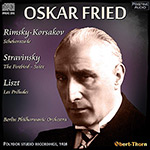 The first record contains the Fire Bird’s dance, and that of the princesses; the second, the Infernal Dance, Cradle Song and Finale. Who will write the Russian Ballet music so subtly to the purpose as this? Now that there is so much interest in ballet, so many books about it, we need the composers. All very well to adapt the classics, but where are the Stravinskys of the day ? It is difficult to realise that this music is a quarter of a century old. The ogre Kastchei’s chromatic growls open: evil shapes lurk in the magic garden, where the firebird flits, pursued by Prince Ivan, we are to understand. Its flame-like feathers, its shining eyes, light up the garden by night. It plucks the golden apples (which, in one version of the legend, bestow youth and beauty). We remember that the bird, in gratitude for Ivan's setting her free, gives him a feather, which shall call her to his aid, at need. The second side shows the captive princesses playing with the apples, forgetting for a while their durance. The record paints their dainty shyness exquisitely: the lightness, and the pastel colouring, are most charming. Ivan falls in love with one of them. On the third side, the princesses have returned to their captivity, and the ghouls and ogres of Kastchei flock around the impudent fellow who has invaded their realm. This is where we need to see the ballet. Ivan calls the firebird by waving its feather, and it begins to dance; mesmerised, the servants of the ogre join in. When they are exhausted, the bird lulls them to sleep with another dance (side 4); and the end comes, we are to imagine, with Ivan’s destroying the casket which contains Kastchei’s soul. Thereupon his power is dead, and his captives come to free life again; and Ivan marries his princess, who is the Tsar’s daughter; and they all live happily. So shall we, whilst we have these ripe memories of Stravinsky at his best. The last record welcomes a steel needle, but the delicacies of the others win me best by fibre.

There was more sound in those shellac grooves than we realized years ago.

An admirer of Mahler, who made the first recording of a Mahler symphony, Oskar Fried was an important conductor in the Germany of the teens and 1920s but had to flee Germany when the Nazis attained power. He was sufficiently celebrated that he supposedly made a silent film during which he conducted the Symphonie fantastique, the purpose of which was apparently to enable orchestras of the future to be “conducted” by him. Unhappily, the film, if it existed, was lost. Unlike so many of his colleagues who escaped Nazism by fleeing West, Fried fled East, to the Soviet Union, where he had already conducted with some success, after which, he seems to have stopped making recordings and pretty much disappeared from Western consciousness. His recordings suggest that he was a strong podium personality with a taste for drama. Witness the three above-listed recordings.

There’s some surface noise at the outset of Les Préludes but it will disappear as you become absorbed by the performance. Although the fast middle section is whipped-up into such a froth that the orchestra can barely articulate it, most of the performance moves along at a conventional tempo, punctuated by subtle tempo shifts and stretched cadences. Scheherazade and the Firebird Suite, as it happens, are right up his alley. Perhaps the winds might have been more closely recorded but that would be my only complaint, given the patient way he builds “The Sea and Sinbad’s Ship” and the delicate touch he exhibits in parts of “The Tale of the Kalendar Prince.” I would prefer a slower tempo for “The Young Prince and the Young Princess,” which comes off as too bouncy and “sing-songy” the way he takes it. There is some congestion in loud passages but the harp, snare drums, and other percussion instruments come through nicely. His fiery “Festival at Bagdad” does not disappoint. The Firebird Suite, considering its 1928 vintage, features a remarkable display of colors, and Fried creates the desired air of mystery at the beginning. The Rondo is slow and somewhat milked for effect, but he makes up for lost time when he rips into the “Infernal Dance.” The “Lullaby” and Finale are well-judged and, as in the rest of the recording, the dynamic range is surprising. For some odd reason, he makes a four-bar cut toward the end, just before the full orchestra chimes in. Although these recordings don’t pretend to be a substitute for more recent ones, they probably sound better now on modern equipment, given sensitive editing, than they ever did when they were new. There was more sound in those shellac grooves than we realized years ago.