Two major milestones in the history of recorded music

"These two recordings offer an important — and in Nikisch’s case, fundamental — insight into performance and recording practice at the time" - MusicWeb International 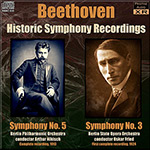 The Fifth triumphantly survives the relatively primitive sonics as one of the greatest examples of malleable, expressive romanticism in action

Arthur Nikisch made a series of recordings before the First World War with the newly formed LSO, as well as the Berlin Philharmonic. Of them the most famous and discographically pioneering was the Fifth Symphony of Beethoven. Actually “pioneering” should be qualified because there was an earlier traversal of the symphony by the Grosses Odeon-Streich-Orchester directed by Friedrich Kark made in 1910. Kark was a kind of German Landon Ronald. I’ve seen this announced on Wing, an exploratory Japanese label, but have never heard it but it has more recently been released on the Historic Recordings label (review). Kark was an important figure in the early history of the gramophone and it would be good if his other large-scale recordings were represented more fully for us now.

But let’s return to Nikisch (1855-1922) whose 1913 recording of the Fifth triumphantly survives the relatively primitive sonics as one of the greatest examples of malleable, expressive romanticism in action. Trenchant and powerful, it exhibits the arch-hypnotist’s art and cogently and, one assumes faithfully, reflects its conductor’s spirited, rich impulses in the canon. There are many examples of his flexible approach to tempo relations, and he and his engineers maintain a good balance between the small body of strings and the (audible) winds and timpani.  The performance has been reissued a number of times on LP and CD. The Dutton transfer [CDBP9784] is very smooth; maybe for die-hard 78 fantatics too smooth. Noise reduction has certainly taken off some treble frequencies but has promoted a homogeneity of sound that, to many, will be very acceptable. Symposium [1087-88] sounds radically different again, with a more straightforward, non interventionist approach. As a result, there is a rather tubby sound, and it’s a bit muddy and distant. Pristine Audio retains some surface noise, but has boosted the sound spectrum — these extensions give a greater sense of density. Where the horns are apt to blare in other transfers, with this latest release they don’t. It’s a far more radical piece of surgery, that’s for sure.

The Kark recording was coupled by Historic Recordings with Henry Wood’s very, very abridged 1922 recording of the Eroica. The disc’s title was ´Beethoven — The Premiere Recordings’. Pristine has taken the same route, coupling the Fifth with the Third, in their case Oskar Fried’s 1924 Berlin outing. Their disc title is `Beethoven — Historic Symphony Recordings’. At least they’re both heading in the right direction. Unlike Wood’s, Fried’s recording was complete. It’s a very impressive document, and the first complete recording of the work on disc. He pipped Frieder Weissmann to the wire by about a year or so. Single movements had also been recorded by such as Leo Blech and Fritz Busch.

When he was making the epic acoustic recording of his Second Symphony, Elgar had the use of 50 players from the Royal Albert Hall Orchestra. Fried would have had fewer, maybe 30-35. That’s not inappropriate for what is a most compelling, almost chamber-scaled reading of great intensity, control and nuance. The distinctive Berlin Opera winds and their trenchantly contributing brass colleagues ensure that colour is freely distributed. The string players sound emboldened to vary and increase the speed of their vibratos in the Funeral March. Fried ensures that an excellent balance is maintained throughout, that dynamics are apposite, and that rubato, whilst often pronounced, is expressively justified. The contours of the performance differ little from Hans Pfitzner’s 1929 electric recording on Polydor, though there are innumerable points of difference interpretatively. The Fried performance has been issued by Music & Arts on CD1185, back in 2006 but I’ve not heard it so can’t comment on their transfer.

These two recordings offer an important — and in Nikisch’s case, fundamental — insight into performance and recording practice at the time. Fried’s recording is much less well known, which makes its reinstatement that much better.