Margaret Harshaw: One of the great American Wagnerian singers, at her height

This remarkably well-preserved taped recording was drawn from the collection of Leslie Austin, on of a number generously offered it to Pristine for possible restoration and release. With the exception of one short moment in the final piece where FM radio interference was briefly apparent, my task was relatively simple - some XR re-equalisation, a little hum and hiss filtering and a small degree of pitch correction to A440 was just about all this excellent recording required.

By the time this concert was broadcast, sound engineers had had plenty of experience in setting microphones in Symphony Hall, Boston, and the balance here is fine, with a full sound further enhanced by the sense of space brought to the recording by Ambient Stereo processing. 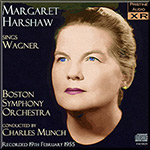