Rostropovich's first recording of his most famous concert work

Rostropovich's 1952 Prague recording of the Dvořák Cello Concerto is one the earliest of what was to become the cellist's "signature tune" - to the extent that he demanded a significantly higher fee for playing any concert which included the work. Previous issues of this Supraphon recording have suffered a harshness of tone which XR remastering has neutralised, whilst bringing out the full tone of both soloist and orchestra. To be able to hear such a fine soloist in this work, playing with the Czech Philharmonic whilst Talich was at his peak is a real pleasure.

I have worked to try as much as possible to balance the tonal qualities of the earlier recording to match the technically superior British 1956 Miaskovsky recording - a work previously unknown to me but a pleasure to become acquainted with.

XR remastering by Andrew Rose at Pristine Audio, January 2012
Cover artwork based on a photograph of Rostropovich 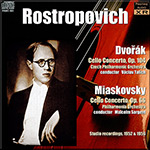 
Mtislav Rostropovitch is one of the new generation of Soviet virtuosi who have in recent years excited the interest of the western world. Rostropovitch was born at Baku, Azerbaijan, in 1927 and received his early training from his father, Leopold Rostropovitch, himself a brilliant 'cellist. In 1943 he entered the Moscow Conservatoire and studied with Professor Semeon Kozolupov. He made rapid progress and graduated with distinction in three years. He continued his studies as a post-graduate student and completed his course in 1948.


Before leaving the Conservatoire he had already begun to make his appearance as a concert artist. He appeared with the well-known artists Emil Gilels, Svyatoslav Richter and Leonid Kogan. Rostropovitch competed in a number of musical events and was awarded first place at the All-Union Contest in Moscow in 1945, the International Festival of Youth and Students in Prague in 1947 and in Budapest in 1949, and the International Contest for the Hanus Vigan Prize in Prague in 1950. He was awarded the Stalin Prize in 1951.


Rostropovitch is a versatile musician, a composer and a gifted pianist. His repertoire includes every work in the 'cello repertoire, the Beethoven and Brahms sonatas, the concertos of Tartini, Haydn, Dvorak, Lalo, Saint-Saens and the Tchaikovsky Variations on a Rococo Theme. His playing is distinguished by its restraint and nobility and the exceptional virtuosity of his technique.

Given the large number of reissues of these two concerto performances, it seems superfluous to talk up their musical virtues. Rostropovich left behind many studio recordings of the Dvořák and listeners will doubtless have their favorites. Mine happen to be this 1952 Václav Talich and the later Adrian Boult (reviewed in Fanfare 20:6). Others laud the Karajan, still others the Giulini (reviewed in 25:4 and 26:2). Live survivors include the Evgeny Svetlanov (BBC, reviewed in 26:6) and Boris Khaikin on Revelation (reviewed in 22:2).


I’m not sure how well known is the story of the genesis of this Talich recording but it’s worth the retelling. In the wake of the cellist’s prize-winning performance at the International Cello Competition in Prague, Supraphon saw an opportunity to record Rostropovich in the concerto to anticipate, and then celebrate, the half-centenary of Dvořák’s death. The cellist was aware of Talich’s reputation: Mravinsky had told him that the Czech conductor was the “best in the world.” He was also aware of Talich’s political situation, and the fact that the authorities would allow a recording but not a concert.


The cellist spoke often of Talich’s influence and help in this work. One thing is especially notable, and that is the nature of the rubati that we can be fairly sure—because Rostropovich mentioned this element—Talich passed on to the cellist. Note, in this respect, phrasally the slow return to the original tempo; how Talich encouraged Rostropovich to pay back time with beautifully calibrated control throughout. The lyrical and rich expression that are displayed owe as much to the lead of the conductor as to the instincts of the soloist. It’s when he became, in later years, too lateral that Rostropovich failed to do full measure to the score.


The Miaskovsky concerto was recorded in March 1956 for HMV. It’s been included in various incarnations, not least “Great Recordings of the Century” (80012), the Rostropovich Edition (65701), and the Complete EMI Recordings edition (17597). Don’t overlook his later recording with Svetlanov on EMI CZS5 72016-2, and there is a further 1959 live broadcast in Moscow with Faktorovich. There have been in many ways estimable recordings of this work from Julian Lloyd Webber, Marina Tarasova, Kirill Rodin, Truls Mørk, and Mischa Maisky. None has approached Rostropovich for the depth and range of his expressive gestures. These two transfers rank with the best.