WEILL The Rise and Fall of the City of Mahagonny

This was certainly a well-made recording for its day, and it's interesting to read Lotte Lenya's own notes referring to its preparation and undertaking:

Although Mahagonny has been absent from the stage since that Berlin production in 1931, its legend has continued to grow, especially with The Threepenny Opera again sweeping the world. Icredibly, three recording companies asked me within a period of two months to participate in complete recordings of Mahagonny. Since I had been so happy with the circumsstances that surrounded the recording of my Berlin Theater Songs by Kurt Weill, I accepted Columbia Record's offer and flew to Germany to assemble the casts for this work and The Seven Deadly Sins. It was singular good fortune that the recording studios of Philips, Columbia's German affiliate, are located in Hamburg, whose opera house is known to thave the finest ensemble in Europe. I was astonished and delighted by its brilliant young artists, raised in an entirely new tradition, alert and flexible, all gifted singing actors. To them, to conductor Wilhelm Brückner-Rüggeberg, also of the Hamburg Opera, and to the technical staff of German-Philips, I am deeply grateful for the accomplishment of a task that often threatened to overwhelm us. Three months of study and rehearsal went before the ten full days set aside for the actual recording. Strangely enough, the final scene, the flaming destruction of the city of Mahagonny, was made on the say Russian tanks entered Budapest to crust the revolt. Surely everyone present was filled with emotion almost beyond endurance, yet when sound engineer Lichthorn called down to thank everyone, to say that we were finished at last, twenty minutes before we were scheduled to give up the studio, not one of the singers and orchestra men moved. Then Brückner-Rüggeberg called back, "No, we want to sing a farewell to Mahagonny." And they did, with a bitter and heartgreaking power that left all of us white and shaking.

From a modern technical point of view I noted few problems with the mint set of discs I was able to work from, barring an occasional edginess at the top end on side five (of six). The original recording suffered slightly from a lightness in the bass, which I've been able to fill out to good effect; likewise the upper treble has had something of a faint veil lifted from it by XR remastering.

This has been my first extended experience with a full-length work by Weill, and musically it has proved very rewarding indeed. I would urge you to seek out a copy of the libretto (and translation if necessary) - for reasons of copyright we cannot reproduce this here - as it certainly adds to the experience if you're not familiar with this excellent work. 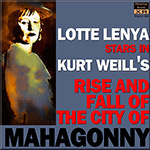 "Mr. Shawe-Taylor, I feel sure, will have another view: let me brave Quarterly censure, and declare that I find Mahagonny a deeply fascinating and impressive work. I don't know why, exactly. You say: cheap little popular tunes. I reply: tunes—and more than tunes, musical complexes—that strike deep, that make one think and feel, and quote Stuckenschmidt in defence: "Melodies and poisonously iridiscent sounds one can never forget". You say: You can't want to hear it as often as you do a Verdi opera. I reply: Well, no, but this opera ties into life around me today, relates to nonmusical thoughts and experiences, as those patriotic pages in Verdi tied into the lives of 19th-century Italians. The local colour, certainly, is Berlin and the Twenties, but the themes—capitalist society, anarchy, too complicated to go into here—are live ones. There are so many ways to approach Mahagonny that I can just give a pointer or two, and let you discover the work for yourself.

One level is simply the pop-tune one, the quality which took "Mack the Knife" (from the other Brecht-Weill opera) into the Top Ten, and could surely do the same for the Alabama Song, and "Denn wie man sich bettet, so Iiegt man" and "Ach, bedenken sic, Herr Jakob Schmidt". Another, the fiendishly deft musical craftmanship of this Busoni pupil: look at the Storm Chorus, or the grimly off-centre reworking of the Magic Flute chorale, or the lyrical counterpoint of the Stork Duet. Weill's plain, cunning harmonies anticipate The Rake's Progress; his ostinatos anticipate Carl Orff's, and are far less crude. Another approach is through Brecht's libretto, both in the long run and in some of the "lyrics" (the word is apt). In Mahagonny there is parody, satire, tenderness, drama: and all done with absolute sureness of touch and certainty of effect. One criticism—and that applies only because it is a recording: without the stage to help, we may get musically bogged down in the chorale and processions of the final scene.

Mahagonny, the City of Nets, is founded by a tradam and two cronies. as a place where anything goes. Jenny and her colleagues soon move in. then Jimmy and his lumberjack companions from Alaska, with money to spend. The love between Jenny and Jimmy, delicately compounded of cash and sentiment, runs throughout the work. At the end of Act I a hurricane threatens the city with total destruction. Dramatic curtain. But miraculously it misses the place: Act 2 is a set of scenes illustrating Gluttony, Love, Boxing and Drinking, each carried on without restraint. But Jimmy can't pay for his drinks: Act 3 is his trial and sentence: two days for indirect murder; four years for "seduction, by means of money"; and for not paying for his whiskey, death. Jim is strapped in the electric chair; and there is a grand finale with processions, the sense of which, I must own, I have not yet got quite clear.

In one scene of Mahagonny, "A Maiden's Prayer" is strummed out on the pub piano, and Jake murmurs softly, "Das ist die ewige Kunst". I suppose I am like Jake when a Weill piece like Lost in the Stars, which reason and training tell me to reject as a sentimental tear-jerker, insists on jerking tears all the same. But Weill's appeal is powerful, not lightly to be rejected or resisted. As for Mahagonny—I can only repeat, hear it for yourself. It is sung in German, but there is a libretto and translation with the set: also an introduction by Lotte Lenya, an essay by Stuckenschmidt, some fascinating photographs of the original performances (the Little Mahagonny at Baden Baden in 1927, the premiere in Leipzig in 1930, the famous run in the Berlin Kurfürstendammtheater in 1931), and some of Caspar Neher's brilliant designs.

This is a well-prepared Hamburg studio performance. Lotte Lenya has lost none of the allure and exciting quality for which she is famous; but now she sings most of the music an octave lower than she did thirty years ago—and so the octaves of the love-duet have become unisons—curious effect, to say the least! She is very close to the microphone, much closer than the others: when she tries to distract Jim from his wildness as the hurricane approaches, her murmur of "Come outside with me and make love" sounds seductively in one's very ear. She is a brilliant diseuse, and a vivid personality. It is a pity, though, that the Alabama Song should have been so much simplified; in its "corporate" form, with Jenny's voice haloed by those of her friends, it sounds far more magical. Heinz Sauerbaum is a pretty good Jim Mahoney (Johann Ackermann in the first version), though he catches the microphone badly on side 5. Otherwise the recording is well managed on the whole; some little adjustments are needed from time to time, as if the results of different sessions had not been perfectly matched.

The zither is enticingly played, and Fritz Gol lnitz brings Patzak-1 ike Viennoiserie to his waltz "Jetzt hab' ich gegessen zwei Kälber". Peter Markwort is outstanding; Gisela Litz, an intelligent and accomplished artist, does well as Widow Begbick. In fact the cast is strong throughout."

This is a clear, clean, and full-bodied recording that is sure to please.

Here we have, in bare-bones style (no libretto or notes), the famous 1956 Columbia recording of Mahagonny that finally established the work in American minds. Lotte Lenya was, of course, well past her brief prime when she recorded this and Threepenny for the label, but the authority of her delivery is unquestioned. So, too, is the performance of the unnamed German orchestra, which fully captures, as Metropolitan Opera performances usually do not, the edgy, ragtime-influenced orchestration. (Despite protestations to the contrary, there’s not a speck of jazz rhythms in any of Weill’s music.) You can almost smell the greasepaint on the performers, so utterly authentic are their interpretations. Lenya does pretty well in limited exposure here, and the other singers are fairly good in their roles. On the other hand, tenor Heinz Sauerbaum is pretty painful to listen to, and no matter what you do to it, the sonics are still in mono.

This recording was previously issued on CD by Sony Classical in 1990, also sans libretto, but that production had a harsh, edgy sound quality. This one does not. Andrew Rose has, once again, brought out a fullness of sound, while eliminating most of the original record artifacts, in such a way as to present us with the performance but no trace of noise. As a result, for those who enjoy the work, this is a clear, clean, and full-bodied recording that is sure to please.