In the fall of 1928, His Master’s Voice and Columbia each embarked on recordings of Verdi’s Aida, HMV in October followed by Columbia in November. Both were recorded in Milan, and each could boast a cast of singers with well-established careers. Both were also in the hands of excellent conductors. About 12 years ago, I produced a digitally remastered transfer of the HMV recording for the Romophone CD label, but until now, the Columbia recording has not had a proper digital reissue.

This recording gives one a very clear idea of a typical 1920s Aida performance which could have been heard at any number of Italian houses during the 1920s. It features the outstanding soprano, Giannina Arangi-Lombardi, 1891- 1951. Having made her debut in 1921 as a mezzo, Arangi-Lombardi was advised to switch to soprano roles, and she made her La scala debut in 1924 as Elena in Mefistofele. During the following 15 years, she appeared throughout Europe and South America, though she never sang in London or Paris. Fortunately, one can hear her in three other complete operas recorded by Columbia: Cavalleria Rusticana, Mefistofile, and La Gioconda. Aida was one of her most important roles, and she gives it a most individual approach. Her high C in “O patria mia” is lovely. Her only flaw is that she has some intonation difficulty at the top of her range during forte passages. She is joined by the equally renound mezzo, Maria Capuana who gives a sensational 1920s rendering of Amneris. The Radamès here is the Swedish tenor, Aroldo Lindi, born Gustav Harald Lindau, 1888-1944. The possessor of a loud dramatic voice, he sadly is not up to the rest of this cast. The other singers all sing well, especially Tancredi Pasero as Ramfis. The conducting by Lorenzo Molajoli is up to his usual excellent standard.

This recording was made in what sounds like a rehearsal studio with very dead acoustics. I have added a small amount of artificial reverberation in order to give it a bit of ambiance. The orchestral and voices are usually well-balanced, although there is a noticeable degradation of the sound at the ends of some of the longer sides. The voices are well-recorded except during the most intense passages where the recording equipment was simply incapable of handling the high levels. During these moments, there occurs severe distortion which is only slightly remediable.

This transfer was made using two excellent condition sets of American Columbia pressings, which yield quieter surfaces than any of the European editions. In order to achieve the best possible sound, each side was tested using a variety of stylus sizes and shapes. I used CEDAR de-clicking and de-crackling, but did not need to use any digital de-noising software. It should be noted that in the American edition, side 27 is a dubbing and not the original master recording. For this side, I used an Italian pressing which was pressed from the master. 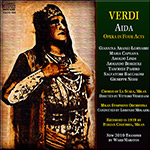 The first two complete recordings of Aida, both performed by La Scala forces, date from 1928. Lorenzo Molajoli’s, the first, originally issued on Italian Columbia, now appears on Pristine Audio in a restoration by Ward Marston that adds reverb to the recording’s original dry acoustic and, I assume, provides the best possible sound. The orchestra sounds somewhat dim, but there’s a vivid and natural presence to the voices. Carlo Sabajno’s version, originally released on HMV, has been more frequently reissued than Molajoli’s performance. In my opinion, no subsequent recordings of Aida are as musically satisfying as either of these authoritative versions made when the work was not yet 60 years old.

Molajoli paces the music with an admirably unfussy combination of flexibility and vigor. Compared to Sabajno, his conducting doesn’t draw attention to itself; the music proceeds with complete naturalness. Sabajno goes deeper, taking some slower tempos that result in greater intensity. He makes much more of the opening prelude, for instance.

The finest performance for Molajoli is by Giannina Arangi-Lombardi, ideal as Aida. Trained as a bel canto soprano, she meets the role’s technical demands easily with wonderful tone and legato, a strong lower register, a feel for the drama, and stunningly controlled moments of pianissimo singing. Her two arias are delivered almost at the level of Ponselle, of whom she reminds me.

Maria Capuana, like Irene Minghini-Cattaneo for Sabajno, is up to the demands of Amneris, with soaring tone in the role’s many soprano-like passages and strength in its dramatic, lower range. Her caressing way with the opening phrase of act II, scene 1 (the duet with Aida), one of the most beautiful musical lines that Verdi ever wrote, surpasses my previous favorite performance of it by Rita Gorr in Solti’s excellent studio Aida.

Radamès is sung by Aroldo Lindi, a healthy-voiced Swedish tenor (born Gustav Harald Lindau). He doesn’t fully characterize the role—“Celeste Aida” ends crudely and he sounds uninvolved in the final duet—but he’s by no means bad. In fact, if he were to step onstage today as Radamès, some might proclaim a bright, new era of Verdi singing. However, Lindi is far outshined by the Radamès of Aureliano Pertile, for Sabajno, a verismo-style performance that has its detractors, but is for me the greatest version of the role ever recorded, emotionally volatile and vocally thrilling.

Molajoli’s Ramfis and King are well sung by two renowned basses, Tancredi Pasero and Salvatore Baccaloni, captured at the beginning of their careers. Armando Borgioli sings, rather than barks, the role of Amonasro with fine sound and phrasing. All three are superior to their counterparts on the Sabajno recording.

While I highly recommend this recording, I can’t help but regret that HMV and Italian Columbia didn’t join forces in 1928 to create what would have been an Aida for the ages. Led by Sabajno, the cast could have consisted of Arangi-Lombardi as Aida, Pertile as Radamès, and either Minghini-Cataneo or Capuana as Amneris, along with Borgioli, Pasero, Baccaloni and the impressive, uncredited soprano who sings the Priestess for Molajoli.