This broadcast performance of one of the Metropolitan Opera's finest productions of Wagner's Die Fliegende Holländer begins on an unusual note, as the Opera's General Manager, Rudolf Bing, introduces a tribute to the baritone Leonard Warren who had died on stage the previous evening in a performance of La forza del destino with Renata Tebaldi. After this emotional introduction, we hear Milton Cross introduce the main performance and we're off!

This recording marks Leonie Rysanek's Metropolitan Opera debut in the role of Senta, one she was to make virtually her own for the following two decades. Her partner here, George London as the Dutchman, is equally scintillating. Sound quality here is superb mono throughout, drawn from two excellent source recordings and enhanced with the subtle use of Ambient Stereo processing and XR remastering. I have preserved much of Cross's commentary, which adds to the sense of a very special occasion. 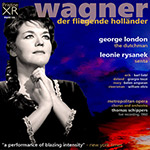 "WITH a performance of blazing intensity in the second act, Leonie Rysanek and George London gave "The Flying Dutchman*' the size of a near masterwork at the Metropolitan Opera House last night.

This opera of Richard Wagner's late twenties is not a frequent visitor at the Met. It was last done nine years ago. But with an interpretation as rapt and electric as this in its most eloquent moments it could become a fixed ornament of the repertory.

Miss Rysanek and Mr. London were not the only vital contributors to a vivid performance. In the pit there was the young American conductor, Thomas Schippers, who brought immense conviction to his task. There were other fine singers in the cast, and the sets and costumes as well as the staging were in the spirit of the work.

One of the secrets of the opera's success was that no one condescended to "The Flying Dutchman." It is easy to take the view that this is not the apocalyptic Wagner. The opera does look back on popular Italian and German models. It indulges in set numbers, some of them sugary and longwinded. But it has a shrewd native sense of the theatre, and it is charged with irresistible sincerity.

Wagner has not yet attained the freedom and flexibility of maturity, but his ideas are often fresh and vigorous. The seed of his future may be discerned in the work's finest moments. His recurrent theme -that an all-sacrificing woman is the instrument of redemption for suffering, bedeviled man - does not yet attain the majesty with which it is stated in "Tristan" and "The Ring." But its treatment here can create magic if performed with sufficient imagination."

Thus began a gushing review of the Metropolitan Opera's early 1960 production of Wagner's The Flying Dutchman, which ran for six performances in January, February and March of that year. And if Howard Taubman was keen to give praise across the board, it was onto Leonie Rysanek that he turned his spotlight of praise more than anyone:


"From the first soft pianissimo uttered by Miss Rysanek as if wrenched from her by an invisible pres­ence, one was aware that one was in the presence of a superb Senta. By the time the soprano reached the long scene with Mr. London, the Dutchman, there was no mis­taking that she was the ob­sessed Senta Wagner must have envisioned.

Miss Rysanek has a rare mastery of floating soft tones high above the staff. She can shape and color them to conver subtle variations of mood. But this was not the only skill in her vocal armory. Her soprano was produced with brilliance at the full. In the past it has lacked some­thing in the middle range, but this time there was quali­ty throughout the voice's compass. Every phrase was part of an interpretive en­tity out of which emerged a memorable characterization.

Seated in a chair as the women sang their spinning chorus, she seemed lost and remote. Her costume was subdued and girlish. Yet, as, she sang Senta's Ballad, she appeared to gain stature and radiance. Miss Rysanek is not a big woman, but she can dominate the stage with the power of her singing and the tension of her acting."

By comparison George London, despite the assertion that "Miss Rysanek and Mr. London were the big differ­ence. By their interpretive grandeur they lifted the opera into a loftier realm than it usually inhabits." merited but a paragraph to himself:

"Mr. London was Miss Rysanek's equal in magnetism. His appearance in the first act had a fierce eeriness, and he sang the Dutchman's monologue with somber pas­sion. In the scene with Senta in the second act he caught the mystery and pathos of the role. His voice was fervid, yet admirably controlled. In bearing and in force of per­sonality he gave impressive credibility to a pivotal role that can easily become foolish."

It seems however that Taubman's assessment of Rysanek, in her first major appearance in the role, was absolutely spot on - the history books tell us that she was to "virtually own" the role of Senta for the next two decades.

Yet not everyone was quite so enamoured of her at first - writing in the Saturday Review at the end of January 1960, Irving Kolodin suggested: "In what has become somewhat of a vocal pattern with her, this Senta was alternately excellent and untidy. In full voice, the tones ring out impressively, and she commands a beautiful pianissimo. But in the middle register, at middle power, the sound is apt to be cloudy, poorly supported."


So what do you think? The fourth of the six performances was a Saturday matinee, broadcast live to the nation (and preceded by an unusual and unexpected tribute to the baritone Leonard Warren, who'd died on stage at the Met the previous evening). Was Rysanek showing any signs of being "alternately excellent and untidy"? Or was she displaying "quali­ty throughout the voice's compass", where "every phrase was part of an interpretive en­tity out of which emerged a memorable characterization"?

Take a listen - I think you may tend toward the latter...

Wagner singing was still in a fine state in the early 60’s; a contemporary studio recording featured a youthful Fischer-Dieskau as a compelling Dutchman, accompanied by Schock, Wunderlich and Gottlob Frick and a more controversially voiced Marianne Schech as Senta; other almost contemporaneous options include Sawallisch’s live Bayreuth recording with the same two principals as here and another with Franz Crass and Anja Silja. There was also a studio recording with London and Rysanek, sadly compromised by Dorati’s listless conducting.

So how does this live broadcast from the Met shape up against that competition? Apart from the usual problem of finding the right juncture at which to place the break when transferring a through-composed opera onto two CDs, which is no more successfully handled here than in virtually every other transfer, this emerges as a truly electrifying and thus highly recommendable option. Pristine sound engineer Andrew Rose might have had the advantage of excellent source tapes to begin, with but he has excelled himself with the clarity and immediacy of the sound he has achieved here, greatly enhanced by his editing and application of Ambient Stereo; this is surely the best result from this era that Pristine has yet issued – and there was obviously nothing more that could be done to minimise the passing radio interference in track 9, CD 1.

Secondly, both principals are in finest voice, ably supported by a superb, if rather too refined and aristocratic Daland from Giorgio Tozzi, who is very different from the usual gruff old buffer, and a good contribution from Karl Liebl, even if his tenor is hardly the Erik of one’s dreams. Apparently his Tristan to Birgit Nilsson’s Isolde met with her approval, but he has his work cut out here surviving alongside the equally huge-voiced Rysanek. He is far from the usual leather-lunged bawler in what is surely the most ungrateful tenor role in Wagner and is certainly less strained than most and quite appealing in his bafflement at Senta’s fixation, even if he does miss the climactic top B in his aria ‘Willst jenes Tags’, whereas Rysanek’s concluding top B blows everyone off the stage. The other supporting singers are first rate, too: William Olvis makes a strikingly vibrant Steersman – though like Wunderlich, hardly sounds sleepy - and Belén Amparan is a rich-voiced Mary. The chorus is lusty if occasionally over-exuberant and ill-disciplined, while Schippers’ direction is, as one might expect of this conductor, highly energised; he infuses the opera with a compelling dynamism from the very first notes. Apparently, according to early reviews, this run at the Met had a rocky start in the New Year but was evidently in the groove by March.

The duets between Daland and the Dutchman avoid longueurs, indeed I found them for once wholly gripping, but the glory of this performance resides in the partnership of Rysanek and London. He is mesmerising in ‘Wie aus der Ferne’ and brings his great, black bass-baritone to bear upon portraying the Dutchman’s agony with enormous intensity. Rysanek is similarly intense; yes, there are moments of bald, curdled or cloudy tone in the middle of the voice and she is occasionally ungainly when swooping up to notes but little of that matters when set against the thrilling animal magnetism of her assumption of the role of Senta; her scream when she first claps eyes on the Dutchman is chilling.

Additional musical and historical bonuses are the inclusion of an introductory tribute to Leonard Warren, who died on stage the night before, the exquisitely shaped and shaded Prelude to Act III of La traviata played in his honour, Milton Cross’s commentaries and the rapturous applause at the final curtain. Truly a night to remember.