"Richter's playing is magnificent ... I wouldn't want to be without this recording" - Fanfare, 1990

These recordings were all made by Melodiya for LP (and, presumeably in the case of the earliest, 78rpm) issue in the USSR in the 1950s, at a time when Richter was just about unknown in the West. They include a number of works for which these are his sole recordings - perhaps most notably the first Rachmaninov concerto - as well as in the case of the Tchaikovsky, possibly his finest recorded interpretation of this major work.

The sources for these transfers were all near-mint German reissues made in collaboration between Ariola-Eurodisc and Melodiya some years later, and benefit from far superior vinyl pressings than were available in the original Soviet issues. Even so, the original recordings were not perfect, and I've had to deal with a certain amount of peak distortion and wow and flutter throughout most of the series.

What I have also been able to recover in these XR remasters has been far superior overall sound quality than was apparent in any of the original recordings. Whilst this is especially true in the later issues, even the very earliest, 1950 recordings have also shown significant improvements. 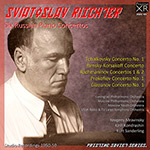 Pristine’s remastering is such that no matter what earlier version you have, replacement is justified.

Collectors have long known these performances, which have been available over many years on many different labels. In all cases, even BMG’s Melodiya series, the sound was cramped at best, distorted at worst. It was those Melodiya and Ariola-Eurodisc German pressings that Andrew Rose used as his source, but there is no comparison between those sources and what he has accomplished. The sound here is superior, significantly so, in every way: orchestral color, dynamic range, piano tone, balance, quietness, absence of wow and flutter, clarity.

All of these performances are spectacular and should be in any serious piano collection. All were monaural originals from the 1950s, and I have heard Pristine’s transfers in their XR stereo version, which is not like the old reprocessed stereo of the record industry, but rather a sonic approach that gives us a sense of the space of a concert hall without the fake left-right division.

Richter recorded the Tchaikovsky Concerto again, but in my view he never equaled this. Part of the reason is the incredibly alert conducting of Mravinsky and deeply committed playing of the Leningrad Philharmonic. But Richter himself seems inspired well beyond the level he demonstrated on his rather heavy-handed DG recording with Karajan, where you had the feeling that everyone involved thought that they were making an important document, resulting in a static monument instead of a living performance. The contrasts between the lyrical and the virtuosic are astonishing in this performance. Richter takes off with reckless abandon in, for instance, the central section of the second movement, but he lingers lovingly over the poetic passages. And he and Mravinsky hold everything together with completely natural gear shifts.

I won’t take excessive Fanfare space detailing all of these performances. Suffice it to say that Richter’s unique blend of a brilliant technique that could do anything he wanted and a rare musical insight that led him well beyond mere virtuosity makes each of these performances unique. It is worth noting that the Rimsky-Korsakov and Glazunov, while not unrecorded, cannot boast competing recordings on this level of performance. Throughout Richter surprises with the very unusual combination of technical prowess and deep musical insights. Even Prokofiev’s First Concerto, normally simply played as an athletic display, is given some genuine poetry and careful attention to dynamic gradations.

Rachmaninoff’s Second Concerto is a gem of a performance, though it is probably the most troubling recording from a sonic viewpoint. There is a degree of distortion and congestion present to a stronger degree than the others, and Richter’s piano tone lacks richness. Nonetheless the performance is so focused and intelligently thought out (without ever seeming studied or mannered) that one finds oneself respecting this old chestnut anew.

Fanfare regular readers know that I don’t believe in the concept of a “best” recording of any oft-recorded work; music is too complex an art form to rank performances as if they were sports league outcomes. But I can say that every performance in this set is well above the ordinary, and is reflective of one of the great pianists of the 20th century at his very best. In addition, with Mravinsky, Kondrashin, and Sanderling he has some of the finest conductors of that era on the podium. In all cases you sense a genuine musical interaction between Richter and his conductors. There are occasional moments of orchestral scrappiness, particularly where the Moscow Youth Orchestra is playing. But those same youths play with a degree of passion and involvement that is inspiring. Pristine’s remastering is such that no matter what earlier version you have, replacement is justified.