Brahms' German Requiem, given its first full performance in Leipzig in 1869, began life over a decade earlier in sketches for a projected first symphony, which became the first Piano Concerto. It is unclear whether the death of Brahms' great friend and mentor, Schumann, became the original impetus for the work; what is clear is that the death of his mother in 1865 inspired the composer to put his full effort into the work.

A first performance in 1867, of the opening three movements, was not a great success - the playing was poor and it was badly received. Five months later a six-movement version, then intended to be complete, was given in Bremen Cathedral with the composer conducting, and his father, and friends Clara Schumann and the violinist Joachim amongst those present in what was a deeply moving event. The fifth movement was then added, giving a symmetry and balance to the whole piece.

At the age of thirty-five, Brahms was finally fully established as a composer with the success of this piece, and the proclamation made many years earlier by Schumann, that in Brahms the world had a worthy successor to Beethoven, began to look possible.

The text is not drawn from the Catholic Mass, as with a majority of Requiem Masses set to music at this time; Brahms instead drew on Luther's German Bible to produce a text designed to console and inspire the living, rather than offering prayers to the dead. (See below for links to further detailed information about this piece)

This recording, made onto acetate 78rpm discs by a Dutch radio station in 1940, was one of a number of Mengelberg's live output that has survived reasonably well. I say reasonably, as the recording itself was originally very good, but wear and tear of the delicate and unique disc surfaces in the twenty years prior to their transfer to tape and then LP had caused significant damage.

Only very recently has the technology become available to correct the problems inherent in the original discs, and by the slow and painstaking application of new restoration techniques we are now able to present this wonderful recording in a sound quality far superior to anything heard before. 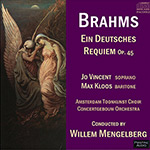 The Brahms German Requiem has been close to my heart ever since, as a college freshman, I sung in it at age 19. We rehearsed it for eight months under Hugo Strelitzer, an exile from the Nazis who had been an aide to Richard Strauss. Strelitzer had often prepared the Requiem for Strauss to conduct; he made it clear that he thought little of our efforts. We turned to Brahms for solace.

One wonders what Strauss would have thought of Mengelberg's performance. They were close and admiring friends. On the one hand, Mengelberg's German Requiem is a great and a magnificent performance even with the usual Mengelberg quirks; there are moments of great choral climaxes in Parts II and VI that are as great or greater than I've ever heard them. On the other hand, Mengelberg has stuck a knife in his artistic creation that has wounded but not killed it. More anon.

The opening movement is very good, but not great, due to Mengelberg's typical tempo instabilities. Because of this, the beautiful modulation at "Sie gehin hin" does not make as great an impact as it could. Still, there are many beautiful moments.

The opening funeral march is remarkably steady and the choral fortissimo is shocking and very clear. The trio is lovely and the repeat of the funeral march is archingly beautiful and forward in movement. The Handelian fugue that follows is one of the greatest things I've heard from Mengelberg: entries strong and brilliantly clear; counterpoint dazzling. Have I ever heard it this good before? And then, suddenly, it's OVER. I can't believe it. A small poisonous doubt creeps in--can he have cut it? I don't have a score and I check timings with other performances and it's within the time limits, so I let it go.

A superb baritone, Max Klos, opens with "Lord, let me know mine end" and the chorus is very beautiful in consoling him. And then Mengelberg does what no other conductor, not even Furtwangler, Toscanini or Klemperer has done: he conducts the usual murky pedal fugue as if it were Mozart with great clarity and beauty. Every strand is clear; the choral fugue above and the unyielding orchestral pedal below. A magnificent accomplishment.

This acme of sweetness, this bob-bon is superb and the little contrapuntal acid in the middle cuts it very well.

Jo Vincent is not Elizabeth Schwartzkopf in the 1947 Karajan recording of the Requiem and that says it all.

The great climax of the Requiem. Again Max Klos (nearly equal to Hans Hotter) opens and Mengelberg creates great mystery and suspense. The mood finally breaks into tempestuous choral fury. The Pristine Audio restoration has performed a real miracle here. The choral power is "in your face"! The final "Death, where is thy sting?" is thrown out like hammerblows from heaven. I have never heard it with such power. I understand Strelitzer's contempt for our puny efforts.

Then the great Handelian fugue begins: "Thou art worthy, o Lord" and again Mengelberg's mastery of chorus and orchestra is a thing to behold: clarity, power, unstoppable momentum. And it STOPS!
And I know, beyond the shadow of a doubt, that he has made a large cut! I search on the Internet and find two references to large cuts in the 6th movement.

What can one say to such an unbelievable, arrogant artistic blunder? Cuts have been made to works, of course, to sections that were too long or where inspiration lagged. But to cut Brahms at the acme of his inspiration and Mengelberg at the height of his recreation? To me it is incomprehensible. It suggests to me that Mengelberg's great genius was mixed with considerable arrogance, that he did not feel as Schnabel did that "the music is always better than we can perform it".

Strong, heavy. It is perhaps now WE who need the consolations of the Requiem.

It is obvious that I feel strongly about the cuts. Even so, this is a magnificent performance of the German Requiem with miraculous sound especially in the fortissimo choral pssages. I cannot forbear to listen to it, even while I realize that Mengelberg lacked the artistic greatness of a Schnabel, a Toscanini or a Furtwangler.