Although undoubtedly one of the best-made recordings of Toscanini's lengthy career both with the record companies and with the radio broadcasters, there remain a number of sonic issues which we have attempted to address here, as well as one which we have not.

I'll start with the latter: there is no doubt that in many places the soloists are simply too far back in the mix. Their sound is distant, quiet and at times thin. Alas this is something for which nothing can currently be done, any more than one can un-bake a cake in order to add more sugar. Short of finding a multitrack master tape (which doesn't exist) it's simply not possible to separate out performers and instruments and re-balance the mix, especially when working from a mono source.

What we can tackle are a number of other aspects of the recording: correcting the pitch so that A=440Hz; using XR processing to counteract the tonal shortcomings of the original recording equipment; using the latest amazing digital noise reduction technology to clean up residual tape hiss and noise.

Finally there's what is for me the icing on the cake: Ambient Stereo. Suddenly we hear the sound of Carnegie Hall around us, and the recording finds a true three-dimensional quality. This is not the addition of reverberation or an attempt to make a 'stereo' spread of the recording itself - rather it is the extraction of the natural reverberation as captured in the original recording and the opening of this out onto a stereo soundfield. The effect here is truly sensational.

NB. A live NBC broadcast performance of this work was given by the same ensemble in Carnegie Hall on 28th March, 1953, two days before this recording was begun. It is available from Pristine Classical as PACO034. 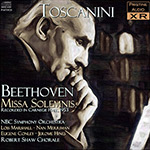 The drama is unleashed like a sequence of lightning bolts...

For most of my brief tenure at Fanfare, I’ve dropped hints regarding Toscanini’s style and why I enjoy it so much despite feeling that roughly 15 percent of his performances were ill conceived. This seems like as good a time as any to explain my views, though I shall try to be brief.

In short, Toscanini’s basic personality was nature-driven. Aside from music, he responded very deeply and powerfully to nature in all its grandeur, beauty, brute force, and almost limitless power. Many are the anecdotes of his proclamations that nature overwhelms all. As a conductor, then, he felt that he must channel these natural forces into the music he was performing, which for him meant total dedication to presenting the textures and rhythms of music as he saw them in the score—even if it meant touching up the score a bit—in order to conform to his vision of nature as the omnipotent force of the universe. This is particularly apropos in a work like the Missa solemnis, Beethoven’s pantheistic hymn to nature. Toscanini’s earlier performances (1935, 1938, 1939, 1940) had an underlying fury but also a controlled sense of drama in which the music unfolded slowly, like yarn from a skein. In this 1953 recording, the tempos are faster (five minutes swifter than 1940), and the drama is unleashed like a sequence of lighting bolts. Oddly for late Beethoven, there are no metronome markings; the Kyrie, for instance, is simply marked Assai sostenuto. Mit Andacht (Very sustained. With devotion).

If you look at the score of the Missa, or any piece he conducted, you’ll discover that Toscanini was fanatic about three things that many conductors compromise on: note values, accents and dynamics, and bringing out the inner voices of every instrument. While it is true that his tempos were often faster than are those of contemporary conductors, they were only sometimes faster than the written scores. What made them sound faster was his extreme textural clarity and his fanatic emphasis on written rhythms. Indeed, his entire career as one hears it on broadcasts and recordings may be said to be a lifelong battle to create a legato style of phrasing while remaining true to the accents of the notes. You can hear this in the opening pages of the Kyrie here, where the organ is in perfect proportion to the (for Beethoven) massive orchestra, yet the astringency of the woodwinds is clearly audible, even in this mass of sound. His pitch was also very true, a real tuning fork A=440, which made his performances sound sharp to those used to relaxed pitch.

Near the end of the Gloria, the solo bassoon is in equipoise with the solo singers. I don’t think any other conductor ever thought of or particularly wanted the bassoon to be equal with the voices, but for Toscanini it was a point of honor. Fans may recall his insistence on overdubbing a solo trumpet part in his recording of the Götterdämmerung Immolation Scene because it wasn’t audible to him in the final playback. This overdubbing, crudely done at the time (1941), resulted in a low-level hum that took 50 years and quite sophisticated digital equipment to eliminate.

This Missa solemnis had no such problems, being recorded on high-quality tape in Carnegie Hall by professional engineers. Even its original LP edition had a warmer, more realistic soundstage than his 1952 recording of the Beethoven Ninth (also remastered by Pristine), but in this new “ambient stereo” edition it is simply overwhelming. I would caution, however, that ambient stereo is not two-channel separation, but merely a spreading of sound between two speakers without creating discrete channels. Thus the result is not only warmer but less artificial-sounding than the electronic stereo of old. Oddly, the singers are quite receded in the soundstage, a problem that also afflicted his late-1930s BBC broadcasts of this piece. I always thought that was merely an error in microphone placement, but after relistening to this recording I’m beginning to think that it was Toscanini’s choice. Certainly, he had to insist that bass Jerome Hines sing softer than the others, because Hines had a massive voice and would have drowned them out. I always felt that Eugene Conley was a vastly underrated tenor, and his singing here is superb. Lois Marshall, who went flat occasionally in her recording of Mozart’s Abduction with Beecham, is right on the mark here. Nan Merriman, who also had a light lyric voice, is the angelic-sounding mezzo.

A few comments, also somewhat truncated, about the NBC Symphony. Many critics, including Toscanini supporters like B. H. Haggin, have perpetuated the myth that his greatest rapport was with the New York Philharmonic, and that his NBC years were (as Harvey Sachs put it) an “odd pendant” to his career. This ignores the evidence when heard in its totality. The fact was that Toscanini, after decades of compromising his deeply held views on style, slowly but surely shed old-world European values of excessive rubato, rallentando, and portamento. Perhaps (as I believe), due to performing more 20th-century works during his NBC years, he developed a post-modern view towards all music, believing that his conversations with living composers and their opinions of his interpretations would have been echoed by, say, Haydn, Beethoven, Berlioz, or Wagner. And yet his Wagner, as well as his Strauss, slowed down over the years, while his Haydn, Beethoven, and Berlioz became quicker. Thus did Toscanini divide styles and schools of music into separate niches. Moreover, the basic sound quality of NBC was brighter, less bass-rich, and more chameleon-like than the Philharmonic. Listen to every recording and broadcast he did with the Philharmonic. The orchestral sound remains constant regardless of composer or style. Listen to the same pieces performed by NBC, and you’ll hear a wider variety of sound colors: very bright for Mozart, Haydn, some Beethoven, and Verdi; warmer for Schubert, Mendelssohn, Brahms, Harris, Tchaikovsky, and Barber; rich and deep for Wagner especially, but also at times for particular works by various composers, this Missa among them.

The bottom line is that neither Toscanini’s supporters nor his critics can ever pin him down. You simply can’t generalize about how he would perform a particular piece at any given time. Even the Bruckner Seventh does not match one’s mental image of how Toscanini “should” have conducted this work. He marched to the beat of a different drummer his entire life, which is why I’ve always considered him a splendid isolationist and not a centrist. Had he indulged in more tempo fluctuations and a warmer, deeper orchestral sonority, his resemblance to Wilhelm Furtwängler would be much more pronounced. He was certainly a bridge to the future, and our modern style, but, alas, many conductors who traveled that bridge left the keenness of what their ears told them behind on the other side of the river.

This article originally appeared in Issue 32:4 (Mar/Apr 2009) of Fanfare Magazine.