We continue our reevaluation of recordings made by Jean Fournier, Antonio Janigro and Paul Badura-Skoda with their complete Mozart Piano Trios, of which this is the second of two volumes.

The of the three works presented here, the Trio in G, K496, dates from 1786, the other two from 1788, the year in which Mozart wrote his three last symphonies. All three are in impeccable Mozartian taste, though it is only with the later two that we start to see him considering something a little more adventurous for the cellist than had previously been the case. Up until these works, the cello part generally offered simple support to the piano's lower notes, but in the middle movement of the Trio in E, K542, there is the suggestion of the kind of balance of forces between piano and strings which would later be more typical of Beethoven or Schubert.

Similarly it is the slow middle movement of the Trio in C, K549, which appears to foreshadow Schubert, a composer more usually associated with the lineage of Beethoven and Haydn. The final movement is purely Mozartian, a "tightly written" rondo (in the words of the original sleevenotes) and it is this which is offer when you click on the play button here.

Thus we have some marvellous Mozart, which is perhaps nowhere near as well known as it deserves to be (a check in the recording catalogues shows not a single LP available in the UK of Mozart's trios in the late 1970s, for example), superb playing, and excellent recordings brought back to life thanks to the mercurial touch of vinyl maestro Peter Harrison. 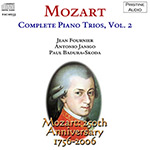