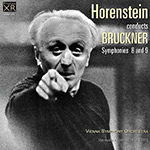 This is the sort of production that puts music-lovers in great debt to the gramophone: fine music rarely heard in this country, a deeply convincing performance, and a recording that is a complete success. Bruckner did not live to finish this symphony and the sketches he had made for the last movement were not nearly complete enough for anyone else to put them together. The work ends, therefore, with its slow movement, a piece of enormous size that needs, and repays, repeated hearing. The other two movements are easier, especially the wonderful Scherzo (which any hesitant listener might try first).

But with a performance such as this, spacious and beautifully judged as it is, there is little need for hesitancy. Whatever one gets out of it at a first hearing, I think it would be impossible to reach the end of this record without the feeling that one had been through something in the way of a deep and great experience. I cannot over-praise Horenstein's handling of this score and the orchestra gives us lovely playing throughout. Finally, as I have said, Vox have produced a really fine recording with a rich quality of sound that is just what Bruckner’s music wants—above all, fine string tone and with plenty of double-bass to give the whole sound solidity. This is a record not to miss.