"Every other that has been made or will be made in the future, will be reduced to fighting it out for the number two position.
Number one will remain, unassailably, Arturo Toscanini's. " - Fanfare

The legendary Toscanini 50th anniversary performance of La Bohème - the only recording of a Puccini opera by the conductor of its première - rightly holds a place as one of the most important live operatic recordings of the 20th century. In this XR remastering I have worked on multiple aspects of the sound.

Finally the restoration of radio announcements brings an extra sense of occasion to these historic broadcasts. (These have been edited to exclude excess sponsor promotion, and have had the interval talks excised.) The restoration of the rapturous applause not heard on RCA's releases likewise feels appropriate with these magnificent performances.

This is a very special recording indeed - never has it sounded anywhere near so good. 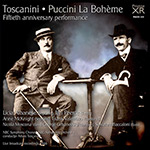 Arturo Toscanini (1867–1957) conducted the world premieres of three Puccini operas: La bohème (1896), La fanciulla del West (1910), and Turandot (1926). Toscanini had many opportunities to confer with Puccini about the interpretation of his works. And while it was inevitable that two such strong-willed personalities would have their differences, Puccini maintained a profound admiration for Toscanini’s abilities on the podium, and what he brought to the composer’s operas. Fifty years after the world premiere of La bohème, Toscanini conducted a concert presentation of the work. The performance, broadcast from NBC’s Studio 8-H in New York, took place over two weeks, February 3 and 10, 1946. The NBC broadcast was issued by RCA, and has maintained a place in the Bohème discography ever since. Given Toscanini’s association with Giacomo Puccini and La bohème, as well as the Maestro’s towering role in 19th- and 20th-century musical performance history, the recording is self-recommending.

But not only is this 1946 Bohème a unique historic document, it is one of the great performances of Puccini’s lyric masterpiece. Toscanini’s Rodolfo, tenor Jan Peerce, recalled: “When we did Bohème, tears were coming down [Toscanini’s] face; it wasn’t put on: nobody saw it, just us. We singers … could see the man and what the music meant to him.” Of course, those who listen to the broadcast recording likewise cannot see Toscanini’s displays of emotion. But we can hear the Maestro time and time again singing robustly along with the soloists and orchestra. And we can also hear a performance that, from the playful opening bars to the opera’s tragic close, crackles with the energy and intensity of the theater. To be sure, this is a lightning-quick performance, clocking in at 1:34:18. Compare that with two iconic studio recordings from the 1950s; Beecham/EMI (1:47:16), and Serafin/Decca (1:51:53). But the performance, while fleet, is never metronomic or perfunctory. Quite the contrary, Toscanini always gives Puccini’s glorious orchestral and vocal writing its full due. Listen, for example, to the expert pacing of the comic Benoit scene in act I, or the way the orchestra sustains a radiant glow for Mimì’s entrance into Rodolfo’s garret. These are just a few examples of a reading that provides unique and fulfilling insights throughout.

Toscanini assembled a worthy cast for his anniversary Bohème. The great singing-actress Licia Albanese was one of the finest Mimìs of the 20th century, and she offers a beautifully sung performance, brimming with humanity and intensity. Probably the biggest surprise is Jan Peerce’s Rodolfo. The American tenor, a fine musician and reliable vocalist, enjoyed a long and distinguished career. But for this reviewer, his performances rarely offered the kind of visceral thrills delivered by many of Peerce’s contemporaries. In this Bohème, Peerce throws himself both vocally and dramatically into the role, and the results are electrifying. The rest of the cast is, at the very least, adequate to do justice to Puccini’s creation, and to Toscanini’s interpretation.

Those who have already heard this Toscanini Bohème in one of its many issues by RCA are familiar with the recording’s singular greatness. Those who are currently seeking to acquire the recording face something of a dilemma. The individual 1991 issue, Vol. 55 of the complete Arturo Toscanini Collection, is currently available only as an ArkivMusic reissue. The 2012 RCA reissue of the Toscanini Collection of course includes the Bohème, but only as part of the complete 85-disc set.

Thanks to Andrew Rose and Pristine Audio, there is a new and compelling alternative. In the liner notes to the Pristine Audio reissue, past reviewers and Rose point to the sonic shortcomings of the 1946 Bohème. I have to confess that while the recorded sound of past releases is indeed dry and somewhat constricted, it has never constituted a barrier to my enjoyment. There is plenty of sonic detail, and the commitment of the artists carries the day. That said, the sonics of the Pristine Audio restoration bring a remarkably significant improvement. The acoustic displays far more depth and warmth, without any loss of detail. The inclusion of audience applause and some of Ben Grauer’s broadcast commentary heightens the sense of occasion. Rose acknowledges the application of modern technology to the original source recording, but none of it sounds artificial or inappropriate. The Pristine Audio restoration immediately becomes the preferred restoration of the Toscanini Bohème. And since this is a performance that demands to be heard in the best possible sound, the Pristine Audio release is a must, even for those who own prior versions of this great document.